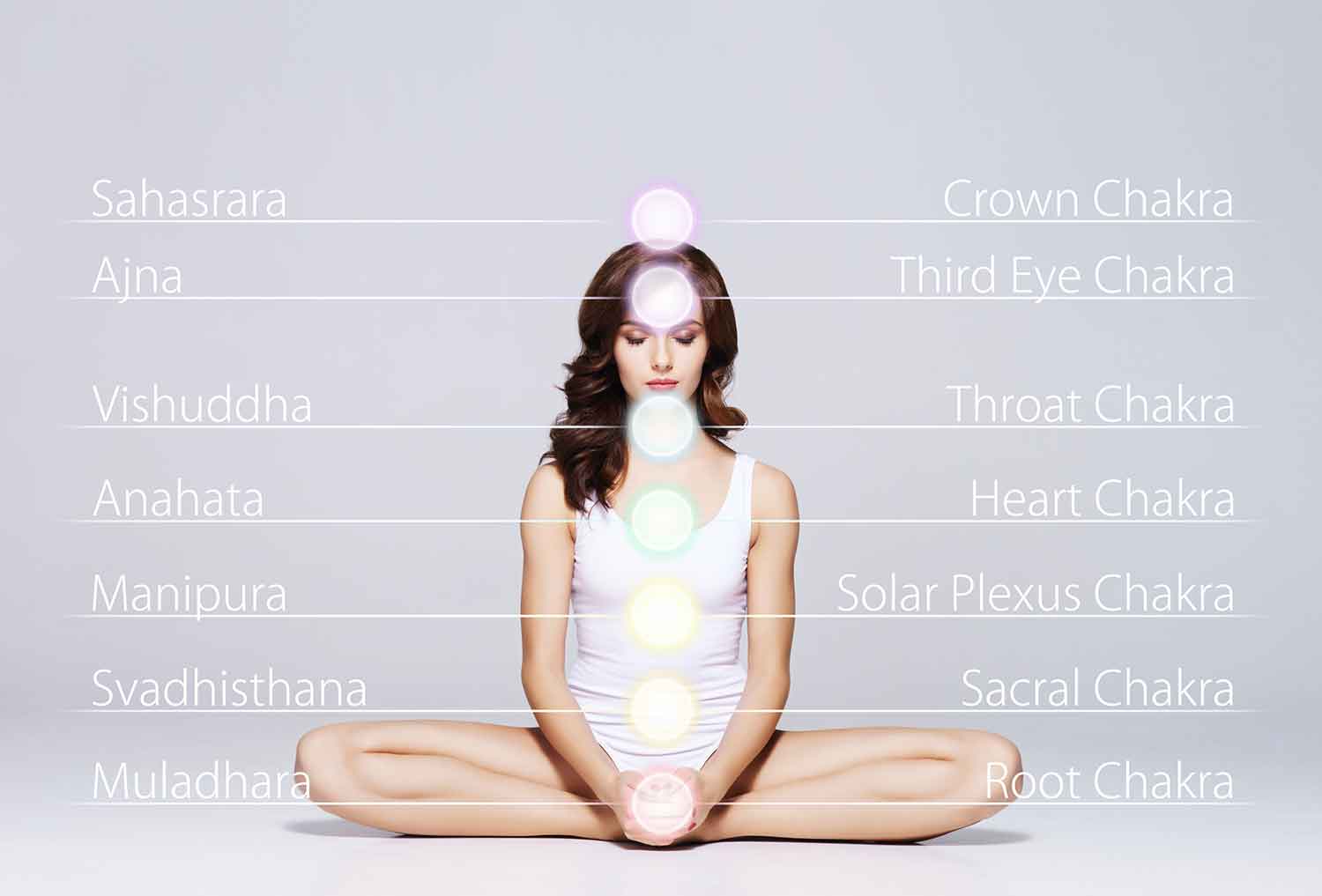 A ‘chakra: is a centre of organisation that receives, assimilates, and expresses ‘life force’ energy – this energy is known as ‘prana’ in the Indian yogic tradition, ‘chi’ in the Chinese tradition and ‘ki’ in the Japanese tradition. There are many other names.

The word chakra literally translates as ‘wheel’ or ‘disk’ because it refers to a spinning sphere of bioenergetic activity emanating from the major nerve ganglia extending forward from the spinal column.

Traditionally, there are seven of these wheels stacked in a column of energy (called the ‘sushumna’) that spans  from the base of the spine (coccyx) to the top of the head.  There are also minor chakras in the hands, feet, fingertips and shoulders. Literally, any vortex of energy and activity can be referred to as a chakra.

Although the chakras are essentially non-physical, they have a ‘location’ in the energy system of the body, particularly in how they relate to each other.  These are just examples of common imbalances that show up.  Each person is unique, so the challenges they are facing as a result of any imbalance will be different.

Jaime works with his High Self/Spiritual Consciousness (called ‘Spirit’ or ‘Source’).  You have the same access to this Infinite Intelligence and Source of Love and Awareness, you may have just forgotten. Jaime’s ‘job’ is to help you reconnect to this vast aspect of yourself, so that everything in your life is more fluid, balanced and healthy.

Through a constant commitment to working on purification of his own energies, Jaime is a pure and clear channel for powerful healing currents to flow through him to you (yoga teacher, intuitive and shaman), and is thus able to receive guidance on your life issues and where your chakras may be imbalanced or partially blocked (note: it is rare to have a fully blocked chakra – but, if this is the case, often a serious illness will accompany it sooner or later, unless cleared).

By being sensitive to energies (in the form of thoughts and emotions), Jaime is able to clean negative energies.  As a result, outer life shifts will occur – physically, mentally and emotionally/spiritually.  Your life is not separate from the chakras – both influence each other at all times.

Schedule and pay for your session >

First time clients MUST select ‘first time session’.  Returning clients can select any other available time slot. When you click to pay, you will see available days and times in your local time zone. You can change this to another time zone, if you know you will be somewhere else on the day of your appointment.

“It’s been 7 days since my remote healing with Jaime, and I’m a little bit amazed at how much better I’m feeling. I didn’t doubt that the therapy would help, but I was quite sceptical about the speed at which it’s supposed to start working. After the energy session, I felt this odd sense of peace and wellness for a while and I was able to lie down with my eyes closed, without any anxiety or panic – this hasn’t happened for years! Yesterday I woke up in a rush of anxiety but it didn’t last long. And today I’ve woken up -for the first time in weeks- without any despair or anxiety. I’m feeling light and energised, and I actually feel able to tackle big and small chores without feeling overwhelmed. Here’s something interesting also – for the last several months, I have been pretty much living on painkillers, thanks to an old shoulder injury that returned with a vengeance. I’ve been worried about the impact on my liver/kidneys, of so many meds, while I wait for a physiotherapy appointment. I just realised on Sunday that for the first time in about 6 months, I went for a whole 48 hours without any pain meds- and without any pain! It’s quite amazing!” Simran, U.K

“Jaime is a God send! I originally booked an energy session to help deal with insomnia and feelings of overwhelment. Just two days after the first session I felt much calmer – and to my amazement my insomnia had completely disappeared, enabling me to feel more refreshed, energised and able to deal with life! As these issues had been completely transformed with such success I wondered if Jaime could help with my back and neck pain, I had been working with a chiropractor for the last eight years. After the first session the symptoms were 50% better, on the second session they had completely disappeared. Jaime easily clears and heals physical aliments that have proved difficult to shift via the usual conventional means. Thank you Jaime!” Sarah, Senior Psychotherapist, England

“Last year I was told I was in early menopause. I’d been struggling for over a year with hot sweats, migraines and out of control hormones. I just didn’t feel myself and the HRT therapies didn’t seem to help. So, I made a connection with Jaime because I needed to try something completely different. I’ll be honest, I was a little reticent to believe in the effectiveness of remote healing, but I am so pleased I opened my mind enough to try. The results were astonishing! In ONE session Jaime turned my early menopause quite literally on its head. After months of symptoms, everything suddenly settled. My cycles have never been so regular and I feel so much better balanced. It completely baffled my GP…” Jo, England

“I recently had my second remote healing session with Jaime and had a tremendous experience. I had suffered night and day for 11 months from painful plantar fasciitis in both feet. I’m a massage therapist with a network of extraordinary colleagues, energy workers, and acupuncturists and no one had been able to help me. Jaime was extremely professional and friendly which immediately put me at ease. He is both grounded and intuitive n his approach. In short, my pain was 90% relieved that same day. It was truly astonishing. A week later it’s about 99% gone with only occasional stiffness. In fact, my whole physical structure is being reorganized around this miraculous experience. Thank you Jaime!” Lisa, New York, USA

“I was highly sceptical of the healing session with Jaime as I’m 8000 miles away in Singapore and was wondering how effective could a remote healing be? I had nothing to lose and decided to give it a shot. I was proven so completely wrong!! I’ve started having a craving for salad and ‘healthy foods’, which is quite unlike me and I’ve slept like a log the first 2 nights. I feel more emotionally balanced and my cough is a lot better already. My back pain has lessened a lot too. I went for a massage today (5 days later) & that didn’t leave me screeching in pain. My masseuse who massaged me a week back told me that my shoulders were not tight or blocked anymore.” A Kaur, Singapore

Overview of the Seven Chakras:

Some of the common feelings and signs of an imbalanced Root Chakra:

Some of the common feelings and signs of an imbalanced Sacral Chakra:

Some of the common symptoms/signs of an imbalanced Solar Plexus Chakra:

Some of the common feelings and signs of an imbalanced Heart Chakra:

Some of the common feelings/signs of an imbalanced Throat Chakra:

Some of the common feelings and signs of an imbalanced Third Eye Chakra:

Some of the common symptoms/signs of a blocked and an imbalanced Crown Chakra:

Articles on remote healing: how and why it works