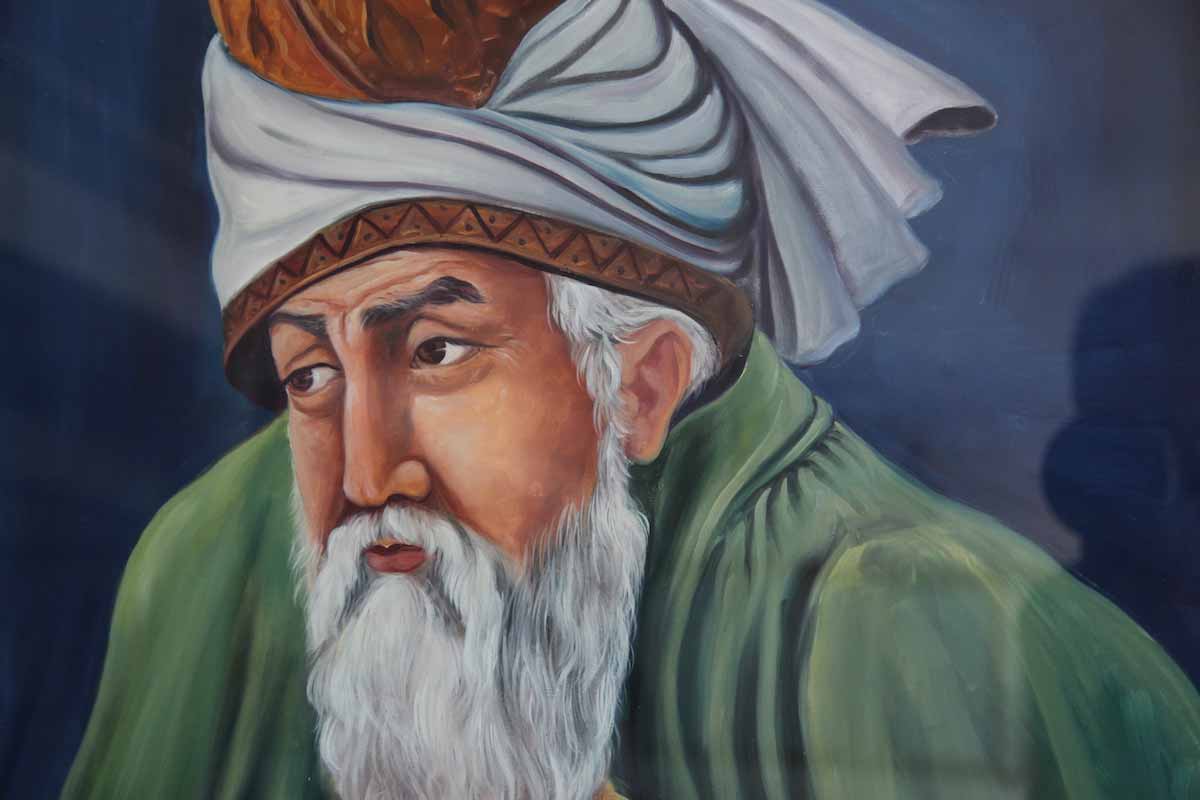 Mowlānā Jalāloddin Balkhi, known in Persia as Jalāl ad-Dīn Muhammad Balkhī and in the West simply as Rumi, was born on September 30, 1207 C. E. in Balkh Province, Afghanistan, then on the eastern edge of the Persian Empire. Rumi descended from a long line of Islamic jurists, theologians, and mystics, including his father, who was known by followers of Rumi as “Sultan of the Scholars.” When Rumi was still a young man, his father led their family more than 2,000 miles west to avoid the invasion of Genghis Khan’s armies. They settled in present-day Turkey, where Rumi lived and wrote most of his life.

As a teenager, Rumi was recognized as a great spirit by the poet and teacher Fariduddin Attar, who gave him a copy of his own Ilahinama (The Book of God). When his father died in 1231, Rumi became head of the madrasah, or spiritual learning community. The school reportedly had over ten thousand students, including masons, grocers, weavers, hatmakers, carpenters, tailors, and bookbinders.

Rumi’s oldest son, Sultan Velad, managed to save 147 of Rumi’s intimate letters, which provide insights about the poet and how he lived. Rumi often involved himself in the lives of his community members, solving disputes and facilitating loans between nobles and students. The letters are described as having lines of poetry scattered throughout.

In 1244, Rumi met Shams Tabriz, a dervish “God-man” who had taken a vow of poverty. Their meeting is considered a central event in Rumi’s life. Though accounts of their meeting differ, one story claims that Rumi was teaching by a fountain, and Shams walked up through the crowd of students and pushed Rumi’s books into the water, including his father’s spiritual diary. “You must now live what you have been reading about,” Shams told Rumi. Rumi believed both his real life and his real poetry began when he met Shams. “What I had thought of before as God,” Rumi said, “I met today in a human being.”

Shams and Rumi were close friends for about four years. Over the course of that time, Shams was repeatedly driven away by Rumi’s jealous disciples, including one of Rumi’s sons, Ala al-Din. In December of 1248, Shams again disappeared; it is believed that he was either driven away or killed. Rumi left the madrasah in search of his friend, travelling to Damascus and elsewhere. Eventually, Rumi made peace with his loss, returning to his home believing Shams to be a part of him: “His essence speaks through me.”

Rumi’s mourning for the loss of his friend led to the outpouring of more than 40,000 lyric verses, including odes, eulogies, quatrains, and other styles of Eastern-Islamic poetry. The resulting collection, Divan-e Shams-e Tabrizi or The Works of Shams Tabriz, is considered one of Rumi’s masterpieces and one of the greatest works of Persian literature.

For the last twelve years of his life, beginning in 1262, Rumi dictated a single, six-volume poem to his scribe, Husam Chelebi. The resulting masterwork, the Masnavi-ye Ma’navi (Spiritual Verses), consists of sixty-four thousand lines, and is considered Rumi’s most personal work of spiritual teaching. Rumi described the Masnavi as “the roots of the roots of the roots of the (Islamic) Religion,” and the text has come to be regarded by some Sufis as the Persian-language Koran.

In his introduction to an English edition of Spiritual Verses, translator Alan Williams wrote: “Rumi is both a poet and a mystic, but he is a teacher first, trying to communicate what he knows to his audience. Like all good teachers, he trusts that ultimately, when the means to go any further fail him and his voice falls silent, his students will have learnt to understand on their own.”

Rumi fell ill and died on December 17, 1273 C. E., in Konya, Turkey. His remains were interred adjacent to his father’s, and the Yeşil Türbe (Green Tomb) was erected above their final resting place. Now the Mevlâna museum, the site includes a mosque, dance hall, and dervish living quarters. Thousands of visitors, of all faiths, visit his tomb each month, honoring the poet of legendary spiritual understanding.

You are not a drop in the ocean; you are the entire ocean in a drop. 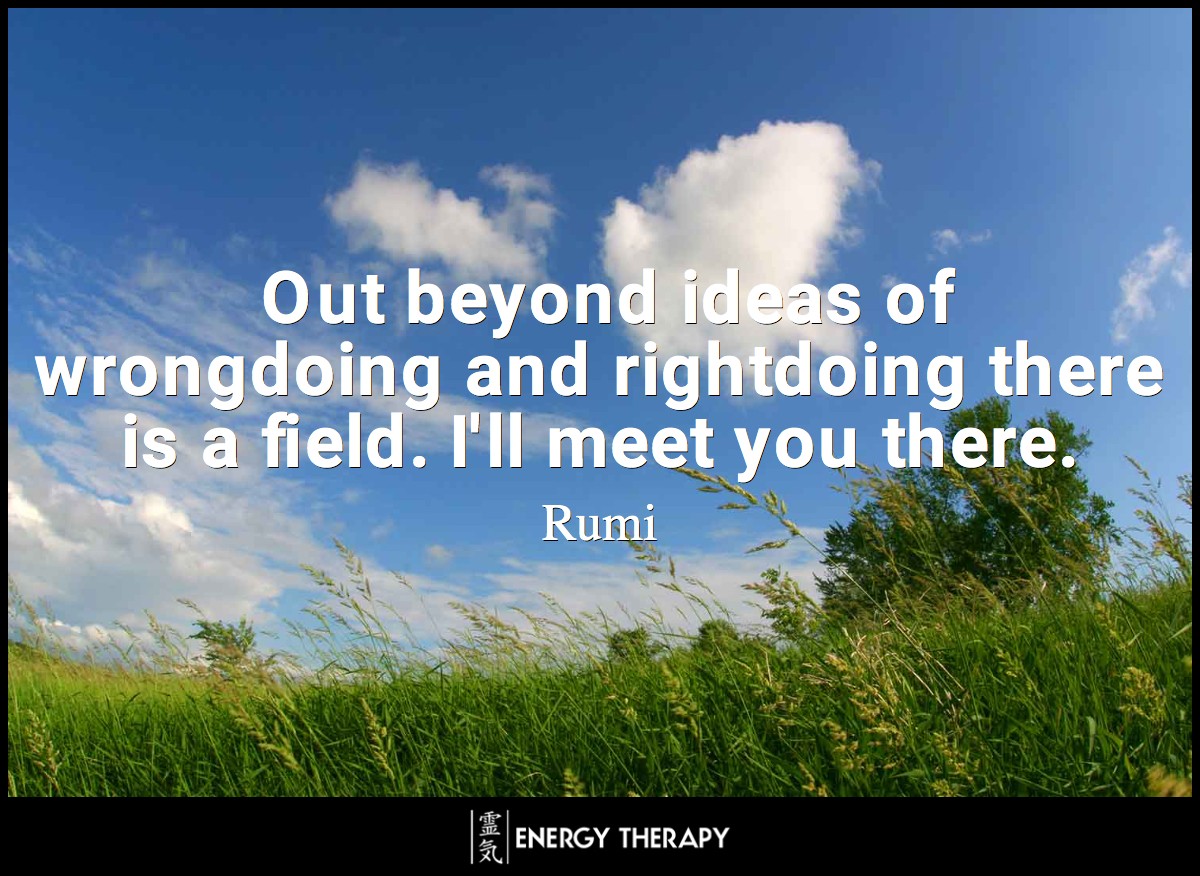 x
Out beyond ideas of wrongdoing and rightdoing there is a field. I'll meet you there. When the soul lies down in that grass the world is too [...]
Rumi 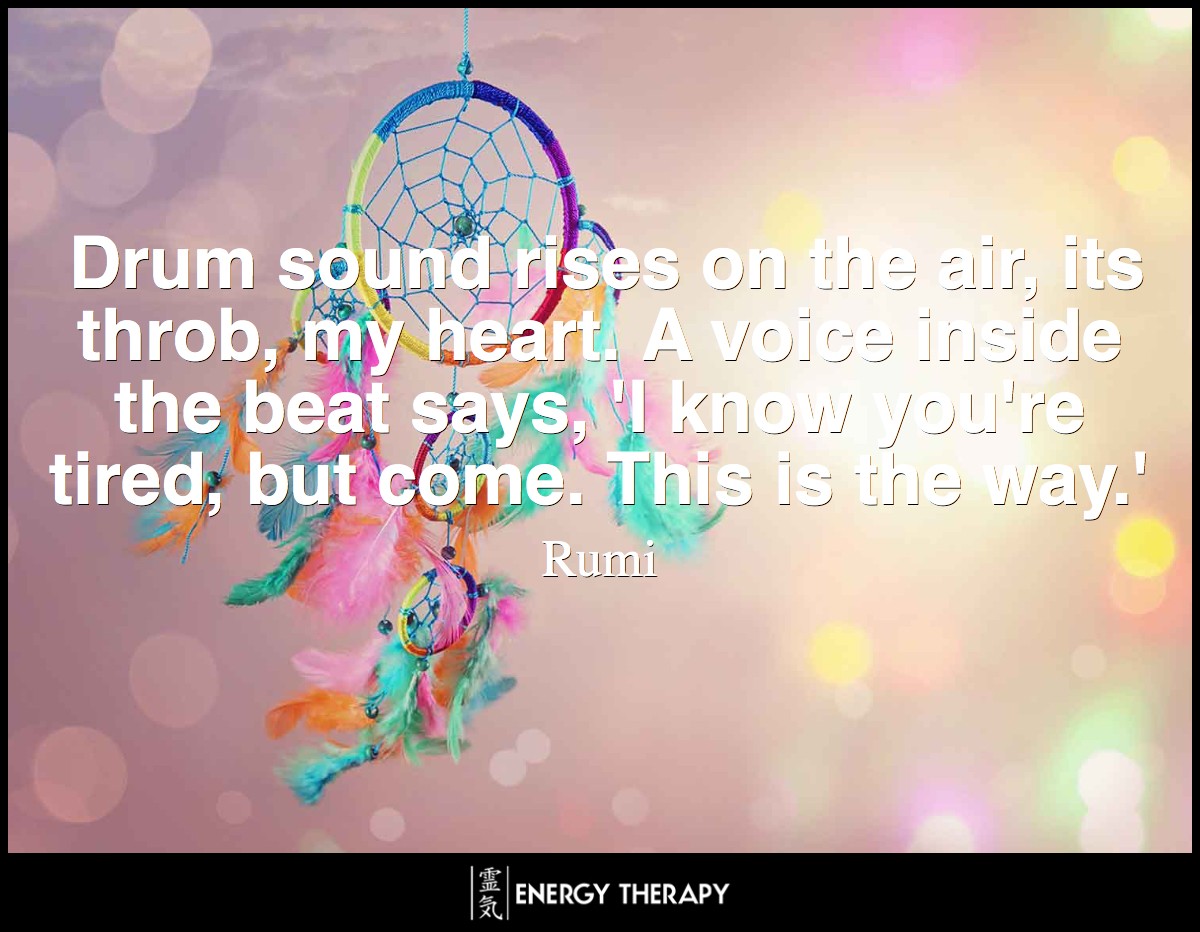 x
Drum sound rises on the air, its throb, my heart. A voice inside the beat says, 'I know you're tired, but come. This is the way.'
Rumi 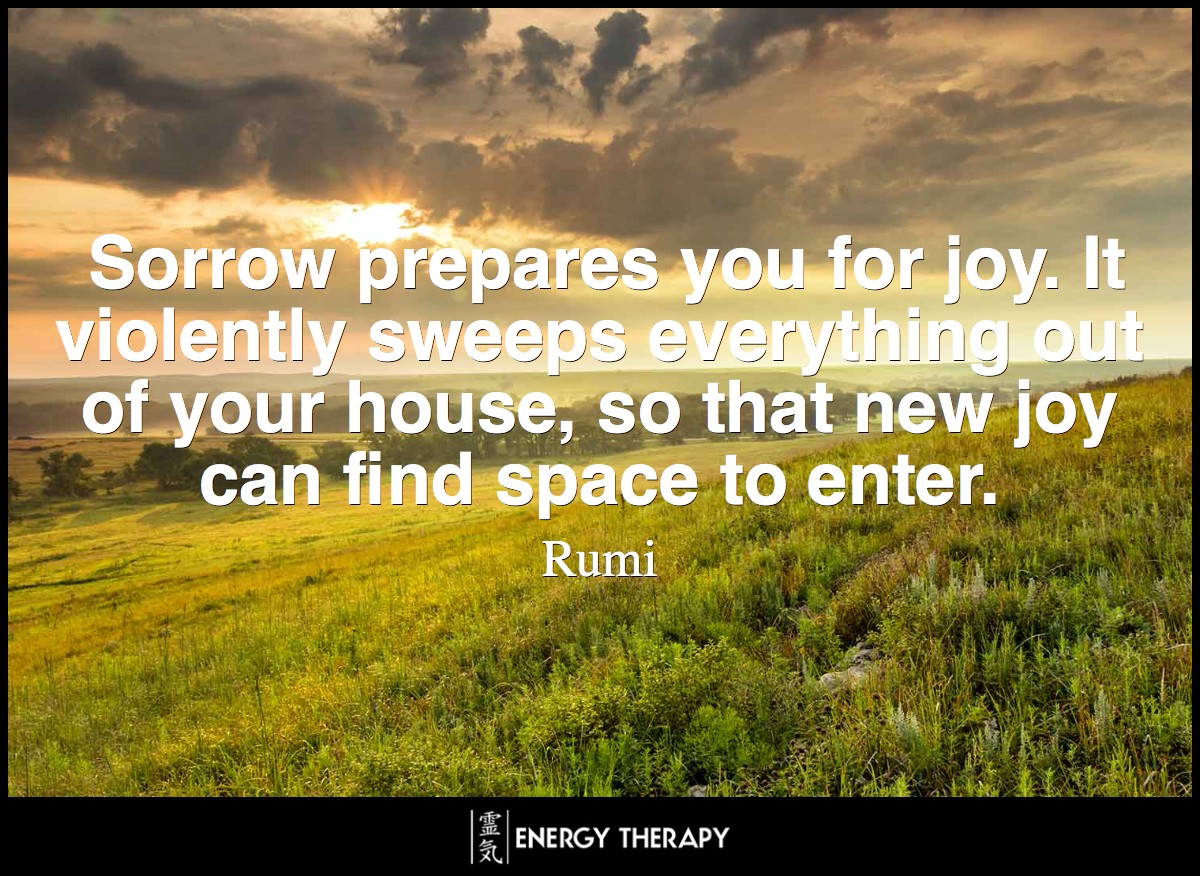 x
Sorrow prepares you for joy. It violently sweeps everything out of your house, so that new joy can find space to enter. It shakes the [...]
Rumi 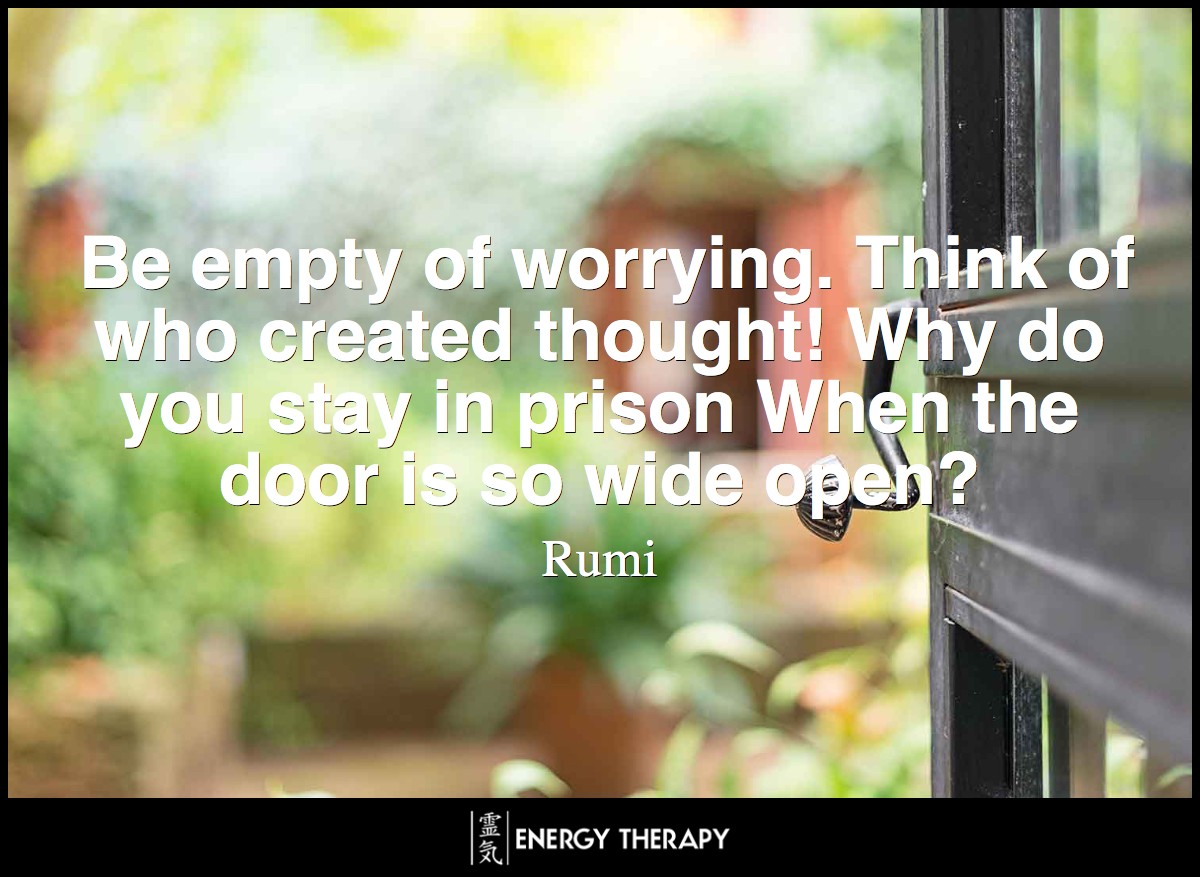 x
Be empty of worrying. Think of who created thought! Why do you stay in prison When the door is so wide open?
Rumi