Why you need to get upside down! Inversions in yoga for health and wellbeing! 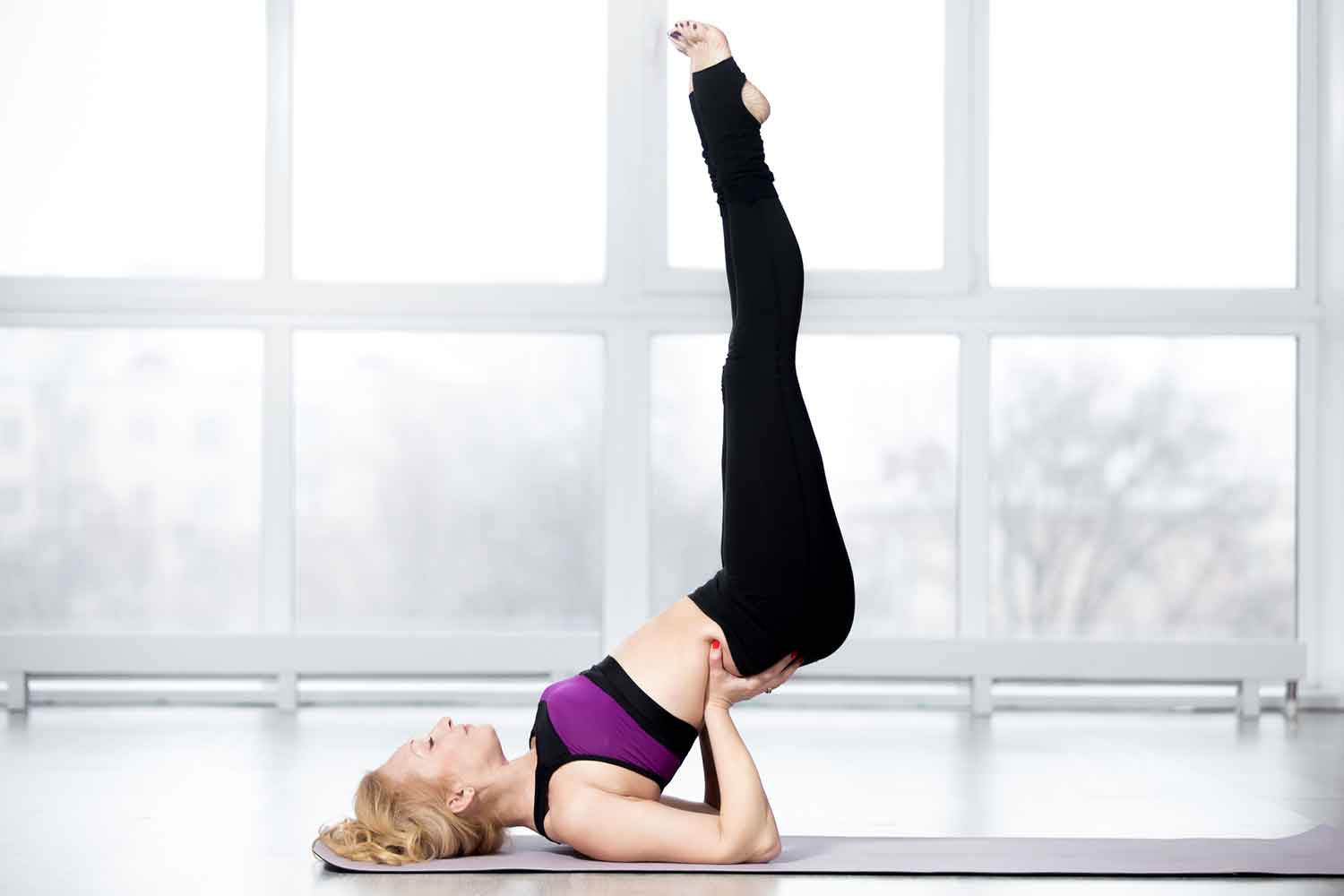 One of the most important practices of yoga are the inversions. Man is usually upright, apart from when he is sleeping, and the force of gravity constantly pulls on his internal organs, blood and energy.

Why is it that we have many common disorders of the lower body, such as varicose veins, sore legs and feet, irritations of the colon and bowel, diseases of the reproductive organs, sagging abdomens, a weakening of the functions of our visceral organs (heart, lungs liver, pancreas, intestines), droopy facial muscles, and a general feeling of heaviness or lethargy?

The downward pull of gravity means the lower (part of the) body receives too much blood and too much pressure from above, and it is also unfortunate for the organs and glands above the heart which do not receive their fair share of blood, particularly the brain. The negative effects of gravity only becomes more pronounced with time – as the vigour and vitality of youth recedes to give way to premature middle and old age.

Even more crucially, from the standpoint of yoga, which asks the aspirant to raise his or her energy up the spine to the brain and higher centres of awareness, it is obvious that the constant downward pull of gravity works against the yogi’s endeavour to raise his/her energy up, and to transmute lower consciousness into a higher state of blissful awareness.

The solution is to use gravity to restore proper balance to the body – i.e. work with it.

There’s wisdom in the saying, ‘put your feet up.’

Although a lot of people would still rather go out for a drink, or crash on the sofa after a long day, once you get into the habit of doing some yoga and meditation, you will quickly feel the difference between the former and latter methods of relaxing.  Dare I say it, the latter becomes even more joyful with time and greater awareness, whereas the former quickly loses its charm, like a fake souvenir.

Don’t baulk at inversions… you can start with simple ones.  This is especially important if you don’t have much flexibility, balance or core strength.

Please check with your doctor and/or physical therapist first if you have any doubt about your health and ability to do these safely.  You should avoid doing inversions if you have a hernia, a prolapsed disc or weak back, weak neck, glaucoma or other disease of the eyes, high blood pressure (hypertension) etc.

“Legs up the wall” pose (variation of Viparati Karani) 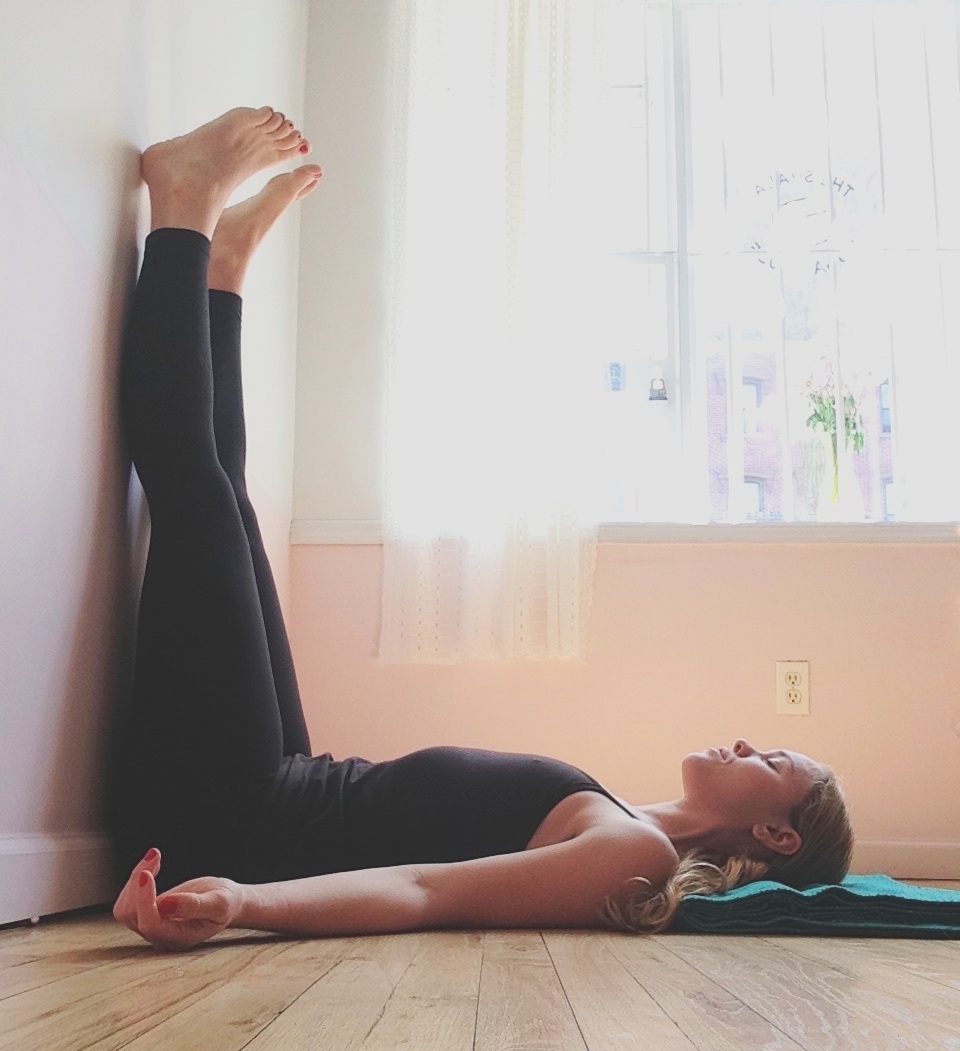 Viparita Karani is often called Legs-Up-the-Wall Pose, but viparita actually means “inverted,” and karani means “in action” meaning that the pose inverts the typical actions that happen in our bodies when we sit and stand.

There are many benefits to inverting the actions in your body, such as the following. When you put your legs up the wall with your pelvis elevated on a folded blanket, lymph and other fluids that can lead to swollen ankles, tired knees, and congested pelvic organs flow into the lower belly; this refreshes the legs and the reproductive area.

This pose also gives blood circulation a gentle boost toward the upper body and head, which creates a pleasant rebalancing after you have been standing or sitting for a long time. If you are stressed, fatigued, or jet-lagged, this pose is especially refreshing.

However, its true greatness is that it teaches us experientially that positive results can come from doing less, not more. Many of us have been trained to believe we must “work hard” in order to reap the benefits of any particular effort, whether it is practicing yoga, being married, or running a business. And, of course, whilst that is useful and appropriate advice at times, viparita karani offers a paradigm shift in how to approach the notion of “work,” in both yoga and life. The benefits derive not just from inverting an action but also from inverting the whole notion of action. When you relax with your legs up the wall, you are practicing the polar opposite of activity, which is receptivity.

Start by setting up a cozy space around a wall. Next, shimmy your hips as close to the wall as possible, then start walking your feet up the wall until your body is in a somewhat “L” shaped position. Make any adjustments to facilitate a more relaxing space– maybe place a pillow under your head, a blanket under your lower back, and  let your arms rest out to the sides.

Once you are in the pose, simply focus on your inhales and exhales (breathing through the nose only), trying to lengthen the latter.  When your mind wanders, bring it back to the breath.

Stay in the pose for 5-10 minutes for optimal benefits.  You may even stay longer if you wish.

Affirmation you may wish to say: “Awake, my sleeping powers, awake!” (This follows the system of Raja Yoga, the inner science of yoga that works with the mind just as much as the body).

Although ‘legs up against the wall’ is a great way to start practising inversions, the more subtle (and thus deeper) benefits of this yogic position may be lost if one does not progress to the unsupported version of Viparati Karani.

Getting into the pose:

Viparati Karani is a powerful mudra.  Learn the secrets of this pose, and other meditation and yoga secrets, on Energy Therapy’s e-learning site.

From Viparita Karani proceed to Sarvangasana (the Shoulder Stand) to draw energy up into the upper spine and neck. Finally, practice Sirshasana (Headstand)  to bring the energy all the way up into the brain, and to concentrate it at the ‘third eye’ (the point between the eyebrows).

Inversions calm the heart, flushes and stimulates organs and glands above the heart, particularly the brain, it refreshes the skin of the face, promoting better circulation and even helping it have a more youthful appearance from the ‘lift’ that naturally happens.  Who need Botox?! 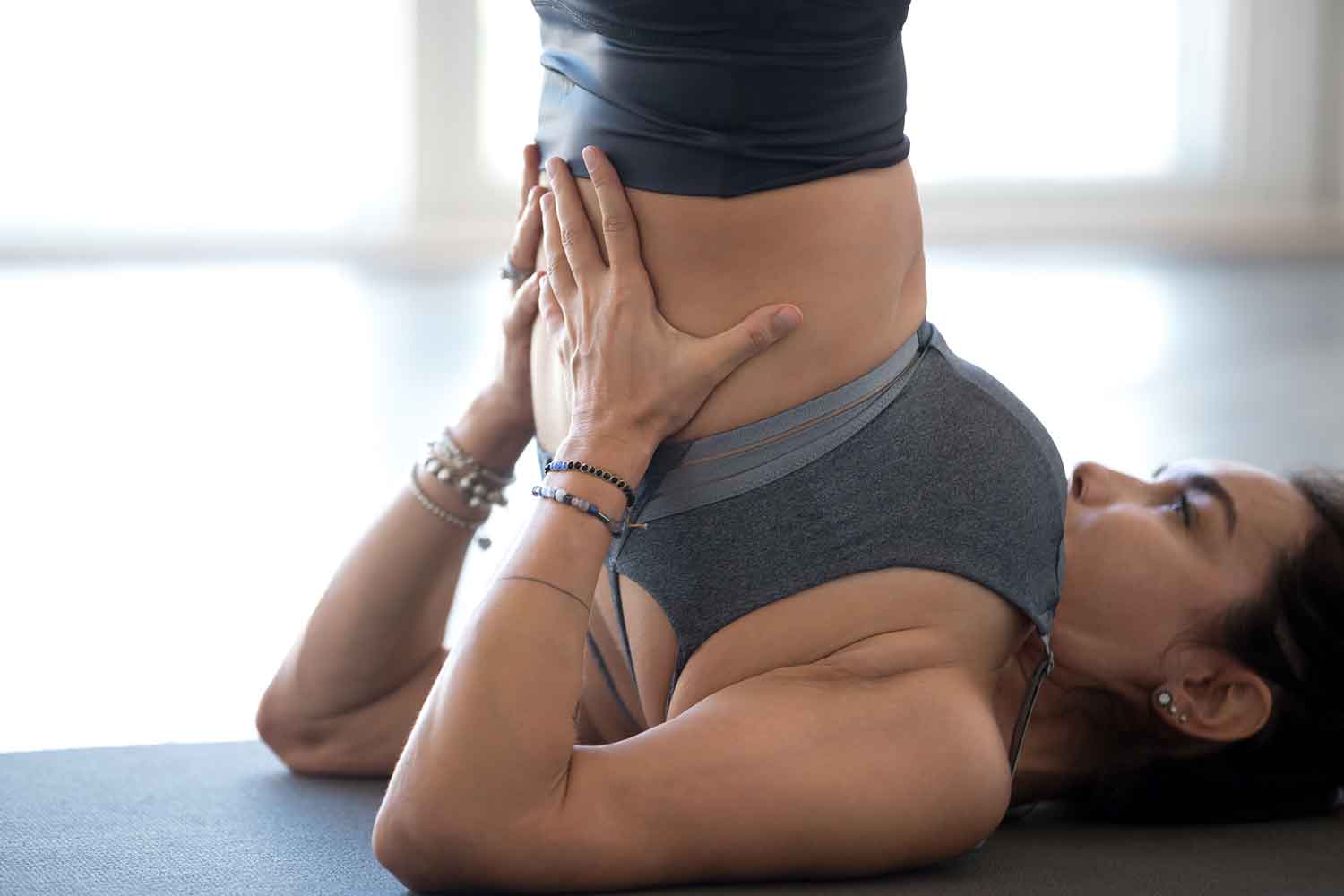 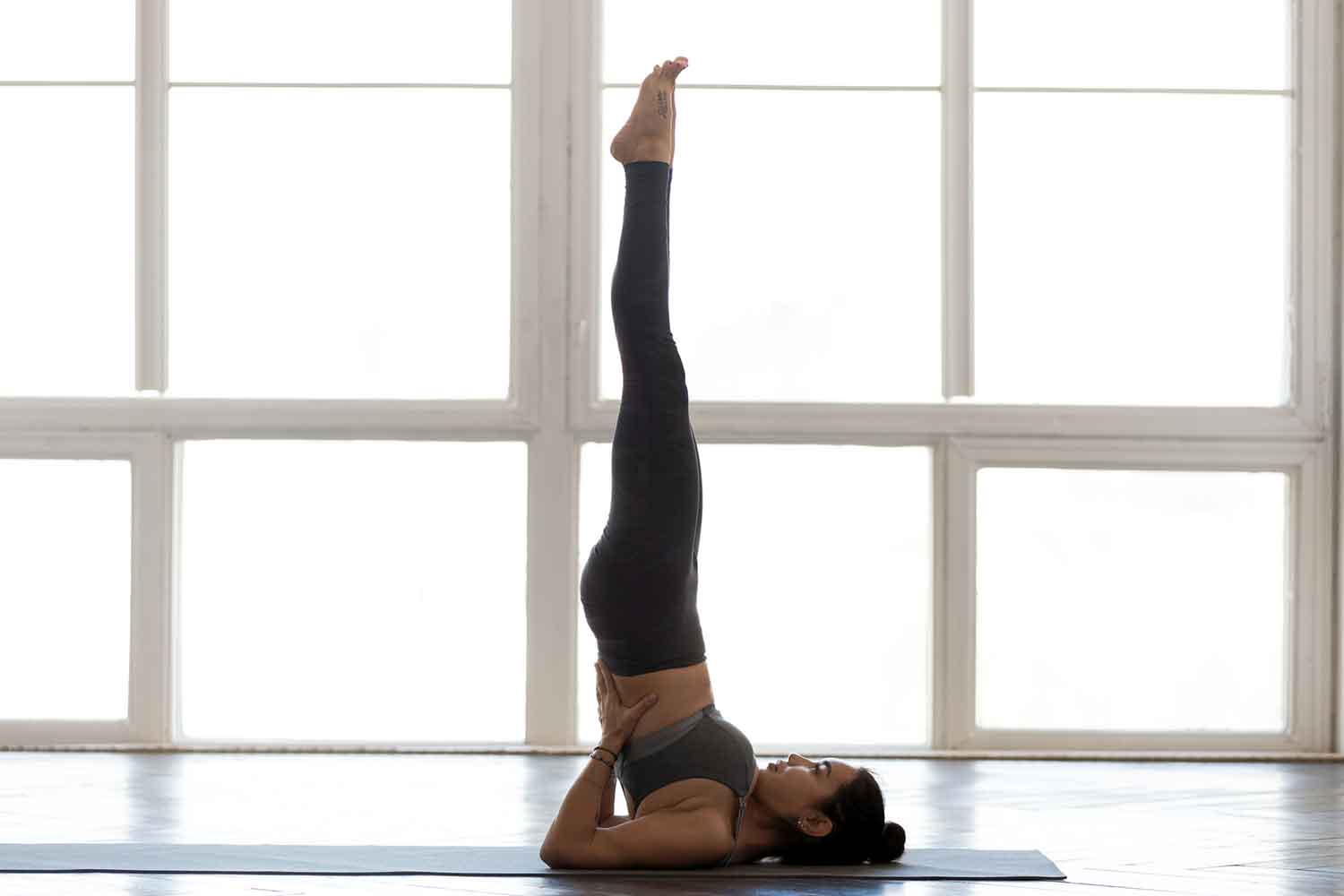 How to get into the pose: 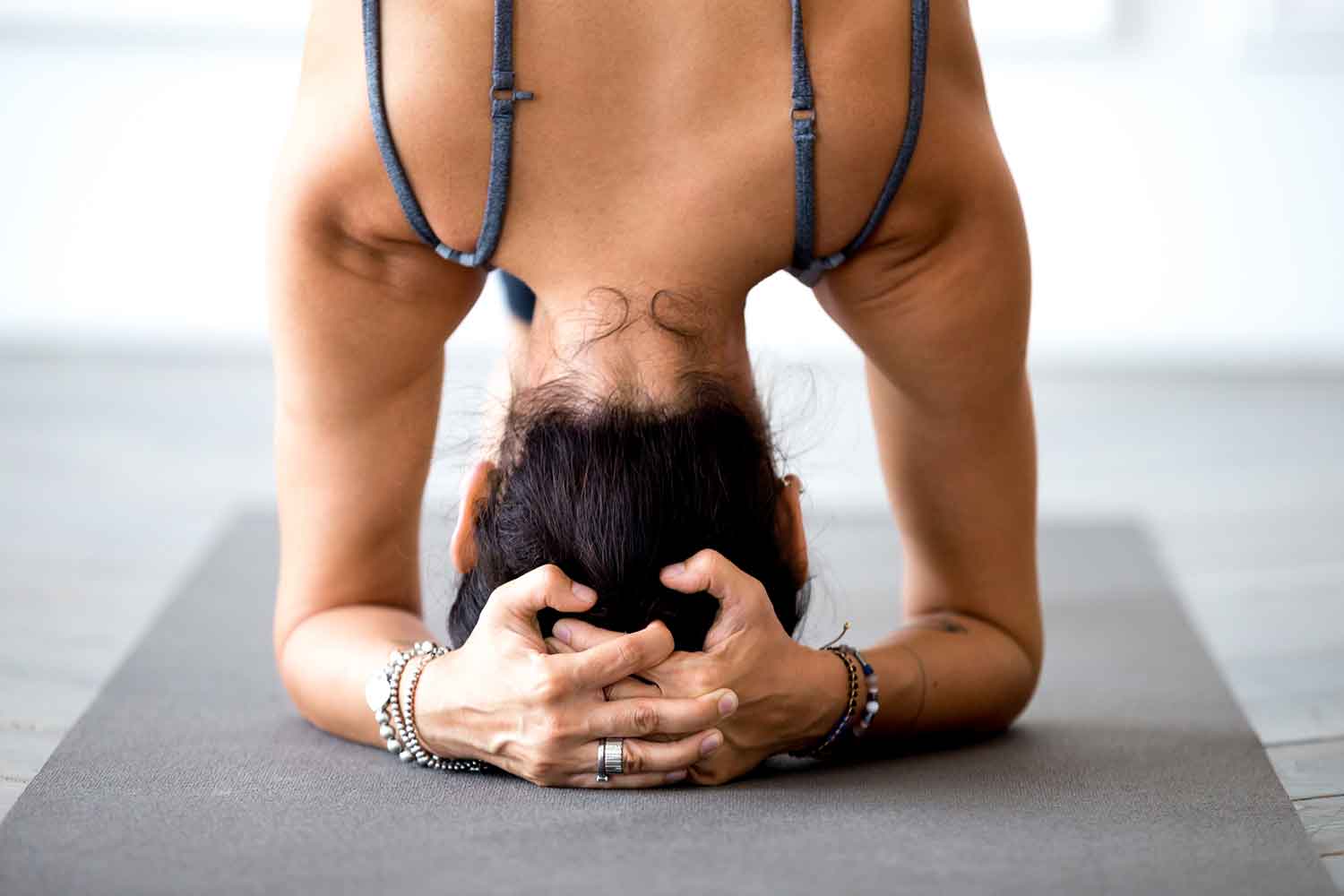 Headstand is one of the most important but also the most difficult poses to practice.  The common mistake for many beginning students is to try to kick themselves up into it, which often lands them on their backs!  It’s also dangerous for the neck!

You must assume this pose slowly, and with complete awareness and control.  If you are unsure, have a friend help – or, better still, an experience yoga teacher.

Use a wall, or a corner of your room, to help you build confidence gradually to stand upside down on your own head.

How to get into the pose: 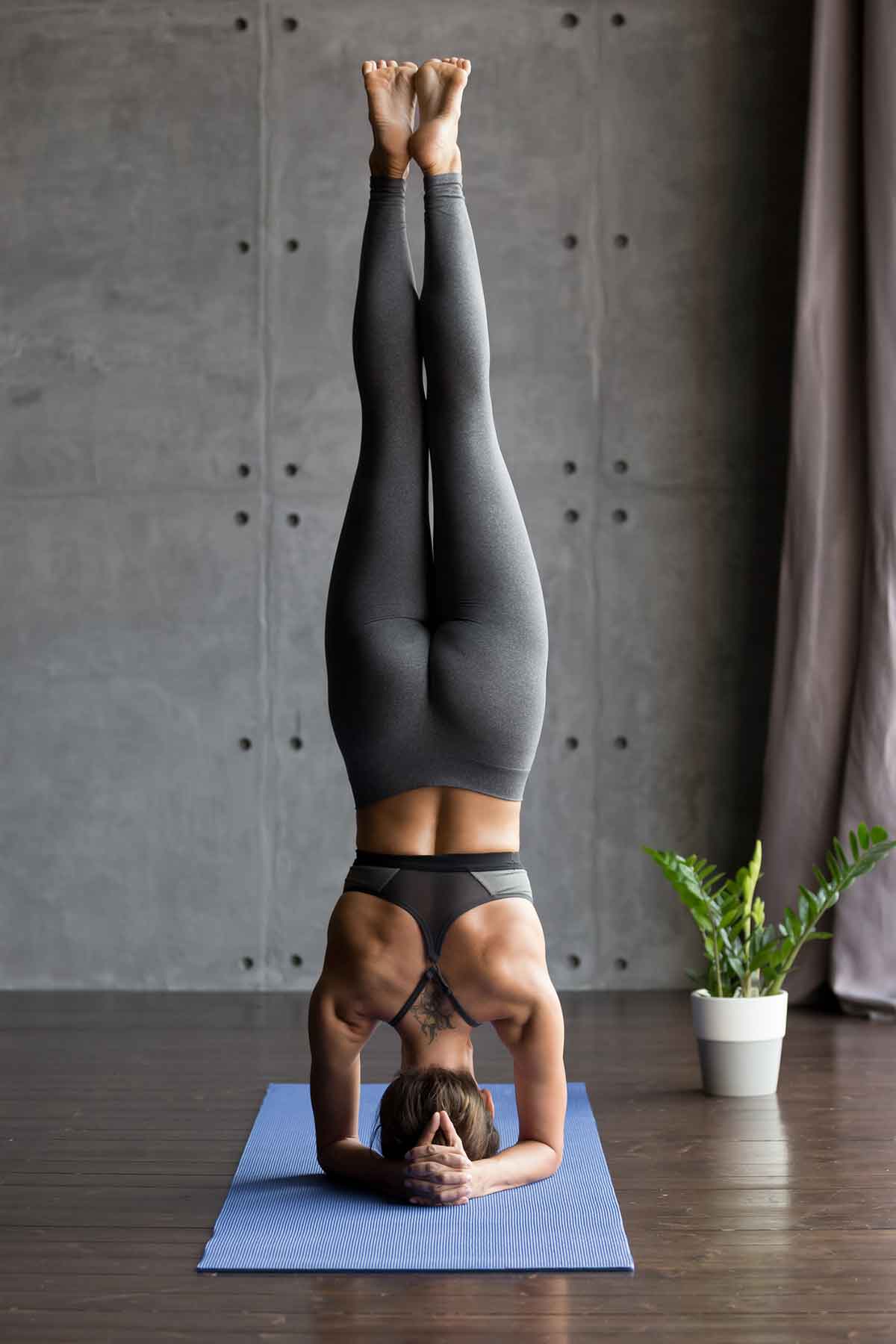 Note: The beginner should not remain in headstand longer than one or two minutes.  Even more advanced yogis should confine their practice to 10 minutes.

Sirsasana is a powerful inversion.  Learn the secrets of this pose, and other meditation and yoga secrets, on Energy Therapy’s e-learning site.

Inversions should be practiced at the end of one’s series of postures, when the muscles of the body and especially those supporting the spine have been loosened and all internal organs ‘rinsed’ of toxins as this will permit the free flow of energy to the brain.

Although the inversions have some general points and benefits in common, each has its own specific benefits; so it’s best to practice them in the sequence mentioned above. For anyone who cannot practice the more advanced poses (Shoulderstand and Headstand), just doing the Simple Inverted Pose (Viparita Karani) can bestow many of the benefits of all the poses.