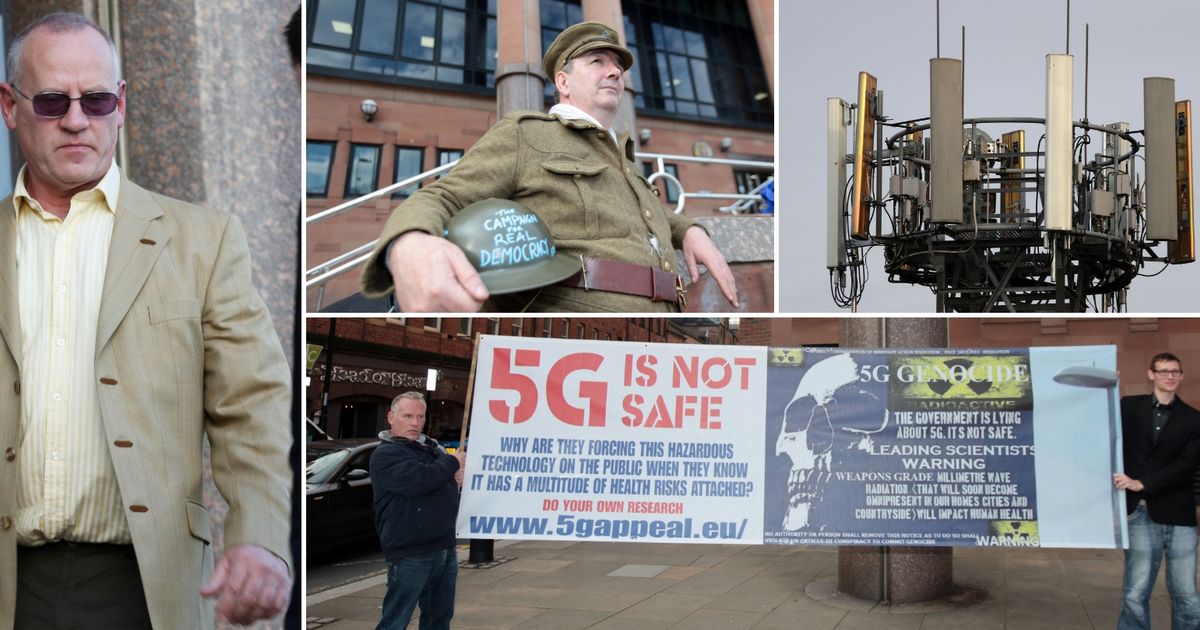 Mark Steele, a 5G campaigner, has been highlighting the dangers of a secret 5G rollout by Gateshead Council where residents have been complaining of increased illness and Cancer in the affected area.

With enough evidence showing the new smart 5G arrays on the top of new LED lamp posts emit Class 1 Radiation frequencies and should thus be treated as a danger to pubic health, Gateshead Council ignorantly rebutted that evidence and even went so far as to create false allegations on social media, as well as printing  leaflets stating that Mark Steele was spreading “Pseudo Science”.

“Please be assured that there is no scientific basis or credible evidence for any of these scare stories about street lights causing cancer and other illnesses.” Gateshead Council

This seems to be the norm today by those in positions of authority, basing their ‘facts’ on mistaken assumptions, rather than having clear, solid evidence.

They actually misused Police Powers to gag Mark Steele but he was vindicated when Gateshead Council was forced to pay out £11,000 of taxpayers money to cover the court costs amounting to woeful ignorance.

In Court,  the Council Officers were embarrassed as they could not explain what 5G actually is – and even their leading Government expert refused to attend the Court hearing.

In conclusion, the Judge refused to gag Mark, stating, “The public have a right to know.”

The secret 5G rollout issue in Gateshead is now officially of public interest and will be treated as a landmark case for other people to start using this Court’s ruling to challenge their Councils.

Surrey, Westminster and Luton all have these toxic Microwave EMF arrays installed on their new LED streetlights. Even if these arrays are currently broadcasting the lesser 2G, 3G and 4G frequencies, they can be 5G enabled by fitting a lens that ‘focuses’ the frequency.

The Judge declared Mark Steele as a credible expert and engineer on EMF and GSM technologies, which proves Gateshead Council are liable for corruption, misleading the public, making people ill and attempting to discredit Mark Steele.

Smart City companies are going into Councils with amazing futuristic presentations detailing the first step, which is to install the 5G infrastructure, i.e. the lampposts on streets and motorways. The “benefits” include 24/7 Police surveillance that sees through walls; smart road signs; 4k live streaming on the move; driverless vehicles and public transport; mobile virtual and mobile augmented reality. All these features provide a wet dream for Councils who will be the first ones to become Smart Counties.

In reality, the truth is sobering.

The evidence that radio frequency (RF) radiation is harmful to life is already overwhelming. The accumulated clinical evidence of sick and injured human beings, experimental evidence of damage to DNA, cells and organ systems in a wide variety of plants and animals, and epidemiological evidence that the major diseases of modern civilization—cancer, heart disease and diabetes—are in large part caused by electromagnetic pollution, forms a literature base of well over 10,000 peer-reviewed studies.

If the telecommunications industry’s plans for 5G come to fruition, no person, no animal, no bird, no insect and no plant on Earth will be able to avoid exposure, 24 hours a day, 365 days a year, to levels of RF radiation that are tens to hundreds of times greater than what exists today, without any possibility of escape anywhere on the planet. These 5G plans threaten to provoke serious, irreversible effects on humans and permanent damage to all of the Earth’s ecosystems.

We must not allow Big Business to convince us that 5G is safe or good for the people as this is a severe breach of trust. Indeed, these companies are continuing to mislead the public on the very real dangers, so either they are ignorant, or they simply don’t care.  Either way, the public loses heavily because financial interests are taking precedent over humanitarian interests, as usual!

Many cities and boroughs across the UK are looking to roll out 5G technology over the coming months in 2020.  Indeed, many have been taking advantage of the Corona Virus lockdown to install 5G towers, so there has been an even greater lack of public scrutiny on this matter.

Questions such as ‘who is paying for these 5G rollouts?’ and ‘who’s given consent on behalf of the public?’ are being quietly and conveniently ignored.

Further, who has done research to prove the safety of the new infrastructure?  Answer: no one.

Mark Steele has made it his mission to raise awareness of this vital issue, and you can find his work at Save Us Now.

What you can do to help!

Firstly, please spread the word and get in touch with us if you want any advice in how to approach your Council. We’re going to be producing a simple Template Pack you can send to your Councils very soon.

WE HAVE A HUMAN RIGHTS’ LAWYER REPRESENTING THE BRITISH PEOPLE!

With the help of Tim Buley QC of Landmark Chambers, as a first step, the High Court will be asked to review the stance taken by the Secretary of State for the Department of Health and Social Care and Public Health England. The claim will be for judicial review of their policy of using ICNIRP’s guidelines to set the limits of public exposure which many scientists say is too high, thereby, causing harm to humans.

Please would you let us know if you can support this vital campaign against 5G started by a group of friends who care about human health?

At the time of writing this article, the petition has already raised nearly £27,000 out of the initial £50,000 needed.  The full amount needed will be £150,000 to take this all the way to the High Court. Therefore, please donate and share across social media platforms and on email.

5G in action: Hundreds of Sparrows Fall Dead from the Roofs and the Sky

Elon Musk’s 5G from space project: His biggest folly yet?