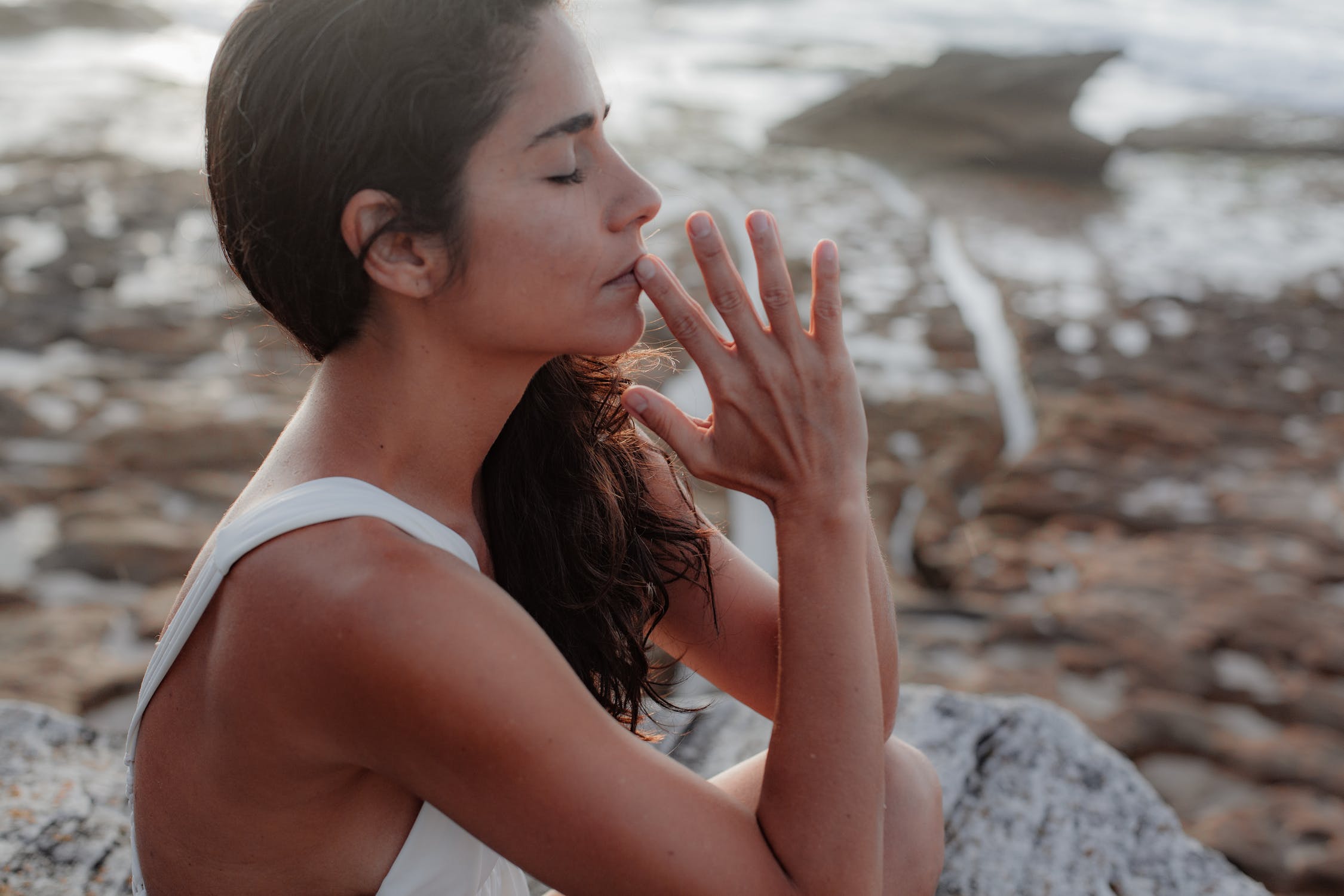 If you are new to the practice of yoga, you could be forgiven for thinking that yoga is for young people or that it’s a series of exercise classes to help you stretch and decompress a bit.

Certainly, in the West, there has been a continual, heavy focus on yoga asanas – or postures.  From yoga flow to yoga yin to hatha yoga and so on, the teacher is usually very busy focusing on correct alignment.

I don’t have a problem with alignment – good alignment means the body gets a chance to heal.

But here’s the thing – yoga has always been first and foremost about the alignment of your energy first. In the Yoga Sutras by Patanjali, a sacred text that most seasoned yogis seek to live by, ‘asanas’ are mentioned only fleetingly.  There are actually seven other interconnected limbs on the 8-limbed path.  Each informs the other.

One is not ‘higher’ than another, they form an interdependent system that takes one to higher and higher levels of awakening. And what is ‘awakening’?  Less identification with the body and mind (ego), and more with the formless, timeless dimensions of the True Self.

In the real yoga, you must eventually let go into the spacious awareness of your broader, all-wise Spirit.  Nothing is to be ‘attained’, there is no ‘goal’ or ‘trophy’ for the ego to acquire.

Coming to yoga from an energy healing practice was very good for me because I quickly let go of my own attachment to getting the ‘perfect pose’ (another ego habit) – and certainly, as my practice has matured, I certainly don’t feel the least bit bothered about doing every pose ‘right’.  I just explore each pose for the joy of it – knowing that the poses are neither the ‘end result’ of yoga nor the beginning.  Asanas are simply a part of the whole system, an entry point into one’s own consciousness.

When yoga is performed without ego on a daily basis, you awaken to being ‘now here’, or ‘nowhere’ in particular.  You realise you have always been ‘here’ as a formless presence, as well as your body and mind.  You recognise yourself as that ‘broader awareness’ in a body which is having many experiences.  You are the ‘up’ as well as the ‘down’, the ‘left’ and the ‘right’, the ‘good’ and the ‘bad.’

A lucky encounter with Glen Ross-Hudson 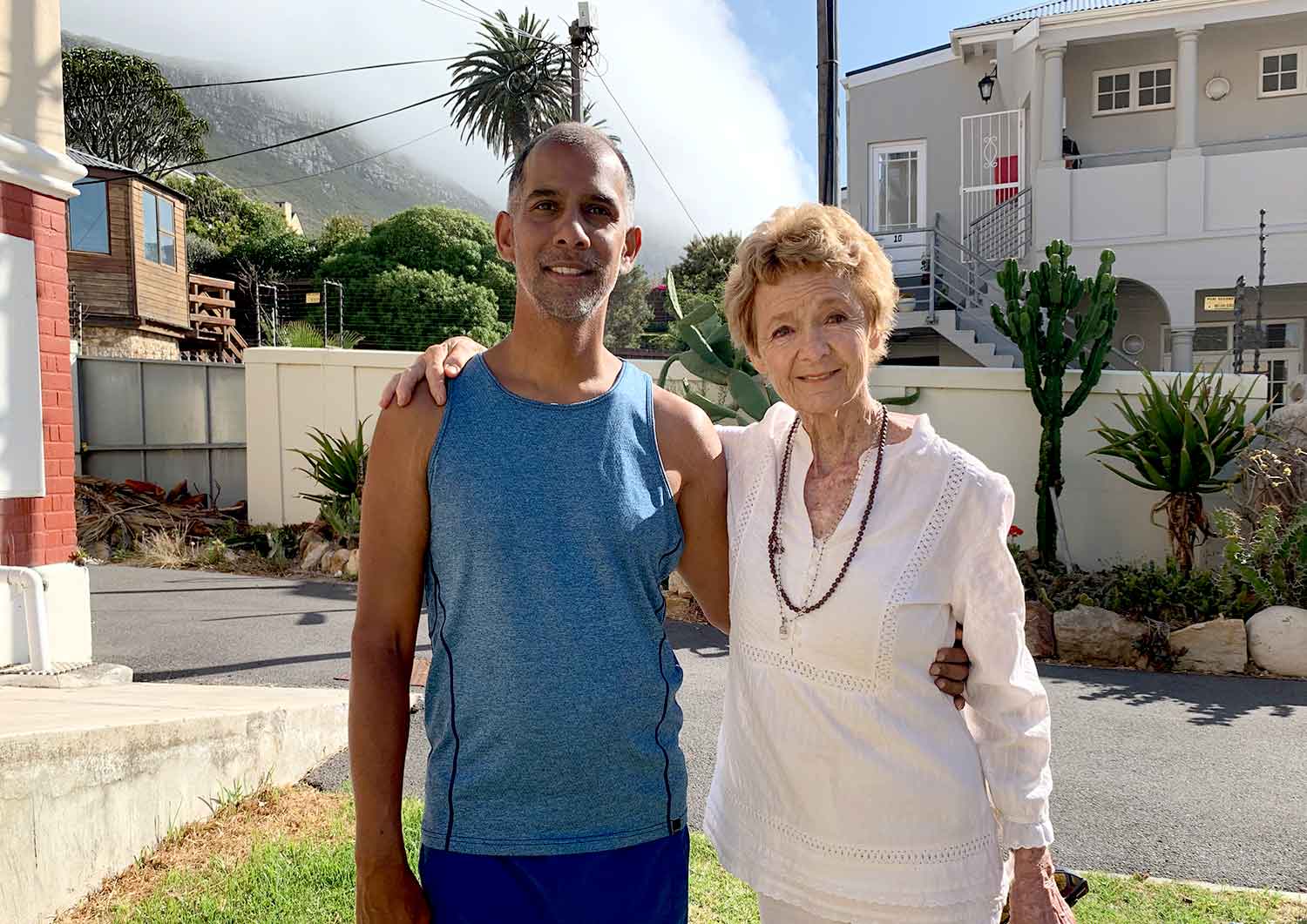 Recently, I was fortunate to spend several months living in Muizenberg in Cape Town, South Africa. My wife’s mother Clare recommended that we go to a teacher in Kalk Bay’s community centre, a five minute ride away in an Uber or a 20 minute walk.  This teacher was in her 70s, and apparently taught very ‘strong’ classes. I was curious.

My wife and I had tried a few other yoga classes which were very good in terms of physical asanas and alignment – but they just weren’t what we were looking for at this stage in our personal evolution.  They seemed to lack the full depth and breadth of yoga – and, of course, this is a very personal observation. For some those other classes are, and will be, perfect.

When I first walked into Glen Ross-Hudson’s classes, however, I was struck by her Presence and ‘no nonsense’ approach to her students, along with a fun approach to the discipline of yoga. Moreover, as the weeks progressed I got to really understand what a hidden gem Glen’s classes are – supporting a diverse and growing family of yogis of all ages.

Glen’s spiritual name is ‘Turiyana’ – meaning ‘Cosmic consciousness’ – but many just know and call her Glen.  She is a devotee of the late Kavi Yogiraj Mani Finger, who brought yoga to South Africa in the 1950s and who also created ISHTA yoga, and also initiated into the Himalayan lineage by his successor Swami Veda Bharati.

Her teachings are a superb example of karma yoga – the discipline of selfless action as a way to ultimate liberation.  She lives what she teaches including all the postures and ‘energy clearing’ routines (yoga chi) including the various kriyas that also purify and cleanse the energy system.  She also keeps her classes very affordable.

Glen literally has eyes in the back of her head, never missing what any of her students do incorrectly in class, and she has many turn up!

She brings a sassy, practical and relatable wisdom, plus a wonderful sense of humour to all her classes — and for those who are attentive, many ‘pearls of wisdom’ are shared to students in each and every class she teaches.

Glen, most of all, wants yoga to awaken the student to their full, as yet unrealised, potential, just as yoga has touched her own life.

In her own words:

“I have been fortunate to have had the blessings and guidance of many great yoga teachers and masters in my life but I learned the most important lesson even before I started yoga, whilst working in the theatre as a ballet dancer. Both ballet and yoga use the body as an instrument to awaken one’s inner awareness but nothing can be achieved without discipline.

When I started the purely physical aspects of yoga, I found my ballet training and knowledge of anatomy to be a boon, but I went further to combine breathing with specific asanas (postures) and found that one could get even deeper into the practice, obtaining even better results.

While I was with a ballet company in Paris, I was first introduced by a devotee of the great Paramahansa Yogananda, author of ‘Autobiography of a Yogi’ to the philosophy and spiritual teachings of yoga but it was only after a long dancing career, when I finally returned to South African and met Kavi Yogiraj Mani Finger, that it call came together for me… I could see it would be my life path.

Since then I’ve tried to live the yogic path, including the yamas and niyamas, and evolve spiritually. However, that was over 35 years ago and I’m still learning… I have found there are many paths up the mountain and just as many pitfalls!

I studied and taught with Mani for over 20 years, and during this time we had regular visits from swami Ventakesananda, a disciple of Swami Sivananda’s ashram in India, himself a great master and highly respected.

It was during his last satsang (offering of truth) at Mani’s studio/ashram that he said ‘Be like a bee – go from flower to flower and make your own honey.’  I felt that this was a personal message for me as it was also his last.  He went into Maha Samadhi (conscious death of the physical body) by leaving his body four days later.

Mani spent a lot of time visiting overseas during which I, and his teachers, took care of his studio and classes. It was during one of these times that he gave me the title ‘Acharya’ (spiritual teacher) and later my spiritual name ‘Turiyana’. This honour is passed from guru to chela (devotee) when the master sees fit, and links them with his lineage.

In the 1990s, I travelled with my good friend Swami Ramanarayananda (Mataji) from the Sivananda Yoga School in Johannesburg to India, and spent a wonderfully enlightening time at the Divine Life Society (D.L.S), Swami Sivananda’s ashram in Rishikesh… I think this is where I started doing yoga outside, at first light, and putting the breath with the asanas – the technique I was to take to Cape Town.

I was fortunate to have many satsangs with Swami Chidananda, the then head of the D.L.S., Swami Krishananda and many other great masters, now since departed. I also visited the great Swami Rama’s ashram, and was initiated into the Himalayan lineage by his successor Swami Veda Bharati in a moving ceremony in a mud hut around the ‘sacred havan’ (fire ceremony) on the banks of the mighty Ganges River.

Throughout many years I built up a wonderful yoga centre in Sandton, which I was happy to leave in very good hands six years ago when I retired to Cape Town to do my own yoga and practice seva (service).

I thought I wouldn’t miss teaching but I did and yoga then took over, opening new doors.

I established a new yoga centre in Kalk Bay where I now teach regularly and do teacher workshops. I also found a way to help the people who need yoga most but don’t always have the ability (health) or means (money) or time to do a full class.

Remembering the classes on the rooftops in India, I devised a special yoga breathing and alignment class, usually done outside, which has been very popular and it has been very rewarding to see people blossoming, growing younger with radiant good health, love, light and laughter. After all, breath is the cord that binds the soul to the body, and the quality of your life depends on the rhythm of prana (life force) within you.”

Glen graciously allowed us to film one of her fabulous morning Yoga Chi sessions for our students Energy Therapy – and you can access a small sample of the full routine below.  If you like it, we invite you to start learning her full fabulous ‘yoga chi’ sequence online here, along with many other yoga, meditation and energy medicine videos from us.

The full sequence is 20 minutes long, and links the power of the breath with movement and awareness.  It’s a wonderful way to start your day, so commit to it for 30 days and see what happens to you!

Learn the routine for free today by joining us.**

** Free trial of 14 days. Cancel within this time frame and you will not be charged. After 14 days, monthly rates apply.