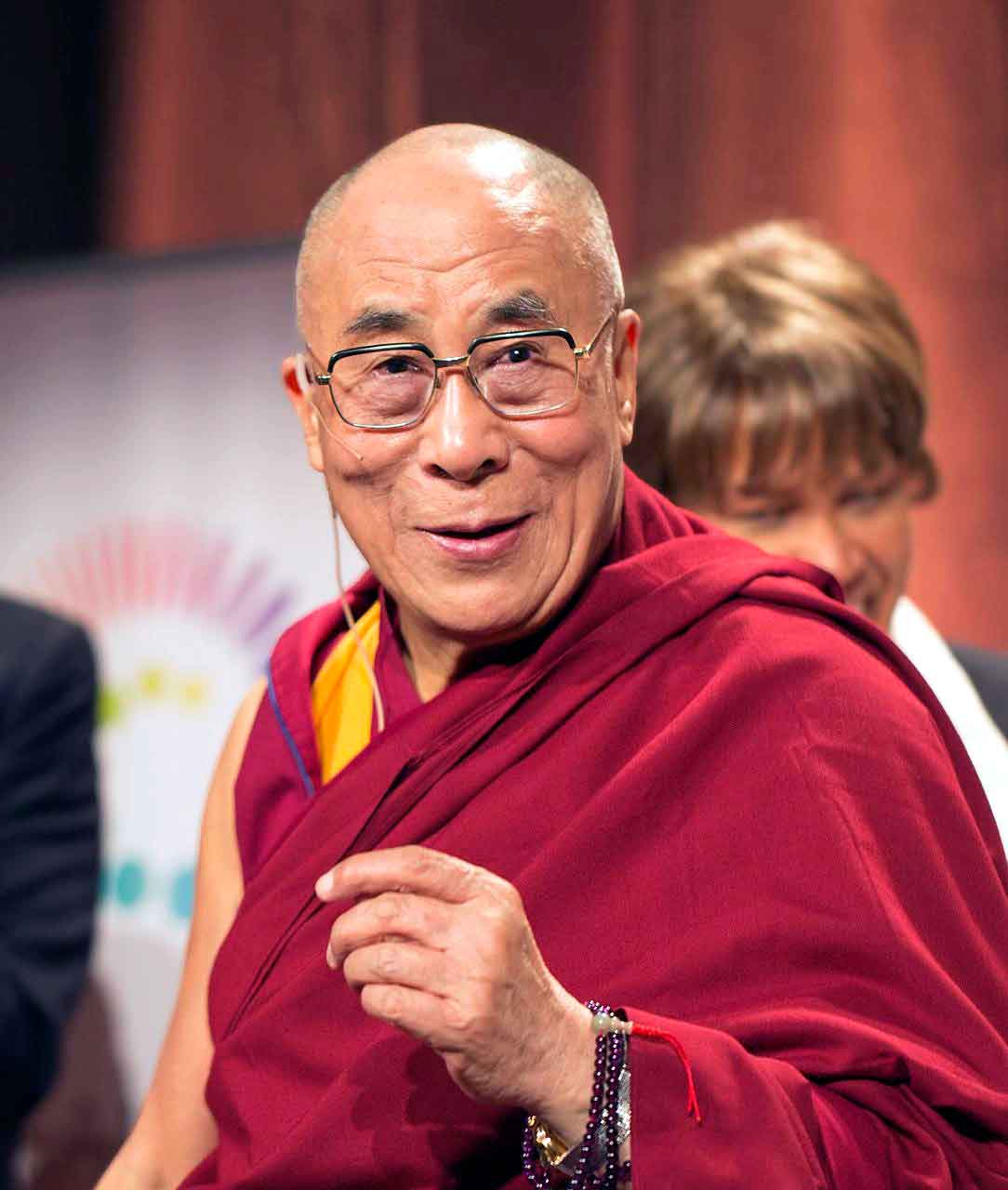 His Holiness the 14th Dalai Lama, Tenzin Gyatso, describes himself as a simple Buddhist monk. He is the spiritual leader of Tibet. Born on 6 July 1935, to a farming family, in a small hamlet located in Taktser, Amdo, northeastern Tibet, at the age of two, the child, then named Lhamo Dhondup, was recognized as the reincarnation of the previous 13th Dalai Lama, Thubten Gyatso.

At age 15, he assumed political power of Tibet as the Dalai Lama. The People’s Republic of China invaded that same year. Fearing assassination, he and thousands of followers fled to Dharamsala in northern India, where they established an alternative government. Since then, the Dalai Lama has taken numerous actions in hopes of establishing an autonomous Tibetan state within the People’s Republic of China. However, the Chinese government has shown no signs of moving toward peace and reconciliation with Tibet.

Dalai Lamas are believed to be the reincarnation of Avalokitesvara, an important Buddhist deity and the personification of compassion. Dalai Lamas are also enlightened beings who have postponed their own afterlife and chosen to take rebirth to benefit humanity. “Dalai” means “ocean” in Mongolian (the name “Gyatso” comes from the Tibetan word for ocean). “Lama” is the equivalent of the Sanskrit word “guru,” or spiritual teacher. Put together, the title of Dalai Lama is literally “Ocean Teacher,” meaning a “teacher spiritually as deep as the ocean.”

Lhamo Thondup was the fifth of 16 children—seven of whom died at a young age. After several months of searching for a successor to the 13th Dalai Lama and following many significant spiritual signs, religious officials located Lhamo Thondup, at age 2, and identified him as the reincarnation of the 13th Dalai Lama, Thubten Gyatso. Young Lhamo was renamed Tenzin Gyatso and proclaimed the 14th Dalai Lama.

His Holiness began his monastic education at the age of six. The curriculum, derived from the Nalanda tradition, consisted of five major and five minor subjects. The major subjects included logic, fine arts, Sanskrit grammar, and medicine, but the greatest emphasis was given to Buddhist philosophy which was further divided into a further five categories: Prajnaparamita, the perfection of wisdom; Madhyamika, the philosophy of the middle Way; Vinaya, the canon of monastic discipline; Abidharma, metaphysics; and Pramana, logic and epistemology. The five minor subjects included poetry, drama, astrology, composition and synonyms.

At 23, His Holiness sat for his final examination in Lhasa’s Jokhang Temple, during the annual Great Prayer Festival (Monlam Chenmo) in 1959. He passed with honors and was awarded the Geshe Lharampa degree, equivalent to the highest doctorate in Buddhist philosophy.

Buddhism was created in the sixth century, BCE, with the birth of Buddha Siddhartha Gautama, making it one of the oldest religions practiced today. Originating in India, the religion spread throughout most of eastern and southern Asia. Buddhism came to Tibet in the 8th century, CE. Unlike other religions that are centered on a supreme being, Buddhism is centered on four basic truths: Life is not perfect; people are left unsatisfied by trying to make life perfect; people can realize there is a better way to achieve fulfillment; and by living one’s life through wisdom, ethical conduct and mental discipline, people will reach enlightenment.

Within these truths are countless layers of teachings on the nature of existence, life, death and the self. Buddhism encourages its followers not to believe in those teachings, as followers of other religions believe in their religion’s central figures and dogma, but rather to explore, understand, and test the truths against their own experiences. The emphasis here is on the exploration.

Tenzin began his religious education at age 6. His schooling consisted of logic, Tibetan art and culture, Sanskrit, medicine and Buddhist philosophy, which is divided into five other categories dealing with the perfection of wisdom, monastic discipline, metaphysics, logic and epistemology—the study of knowledge. At age 11, Tenzin met Heinrich Harrer, an Austrian mountaineer, who became one of his tutors, teaching him about the outside world. The two remained friends until Harrer’s death in 2006.

In 1950, at the age of 15, Tenzin assumed full political power as the Dalai Lama. However, his governorship was short. In October of that year, the People’s Republic of China invaded Tibet against little resistance. In 1954, the Dalai Lama went to Beijing for peace talks with Mao Zedong and other Chinese leaders. However, in 1959, continued suppression of the Tibetan people by Chinese troops led to their uprising. The Dalai Lama and his closest advisers believed the Chinese government was planning to assassinate him. Consequently, he and several thousand followers fled to Dharamshala in northern India and established an alternative government there.

Since the Chinese invasion, the Dalai Lama has taken numerous actions in hopes of establishing an autonomous Tibetan state within the People’s Republic of China. In 1963, he issued a draft constitution for Tibet containing a number of reforms to democratize the government. Called the Charter of Tibetans in Exile, it grants freedom of speech, belief, assembly, and movement. It also provides detailed guidelines for Tibetans living in exile.

Later, in September 1987, the Dalai Lama proposed the Five Point Peace Plan for Tibet as the first steps in a peaceful solution to reconcile with the Chinese government and end the volatile situation there. The plan proposed that Tibet would become a sanctuary where enlightened people can exist in peace and the environment can be preserved. In June 15, 1988, the Dalai Lama addressed members of the European Parliament in Strasbourg, France. There he proposed talks between the Chinese and Tibetans that would lead to a self-governing democratic political entity for Tibet. The entity would be associated with the People’s Republic of China, and the Chinese government would be responsible for Tibet’s foreign policy and defense.

In 1991, the Tibetan government-in-exile declared the Strasbourg Proposal invalid because of the current Chinese leadership’s negative attitude toward the proposal.

The Dalai Lama is the spiritual leader of Tibetan Buddhism, and in the tradition of Bodhisattva he has spent his life committed to benefiting humanity. He has written numerous books and conducted hundreds of conferences, lectures and workshops at major universities and institutions throughout the world, discussing engaging in wisdom, compassion and, more recently, environmental sustainability. Unlike his predecessors, the Dalai Lama has met with many Western leaders and has visited the United States, Europe, Russia, Latin America and many countries in Asia on a number of occasions.

Known as an effective public speaker, the Dalai Lama is often described as charismatic. His message is always one of peace and compassion for people all over the world. During his travels abroad, he has stressed the need for a better understanding of and respect among different faiths of the world. He has made numerous appearances at interfaith services and has met with several heads of other religions, including Pope John Paul II; Dr. Robert Runcie, the Archbishop of Canterbury; Gordon B. Hinckley, the president of the Church of Jesus Christ of Latter-day Saints; and Patriarch Alexius II, of the Russian Orthodox Church.

In 1989, the Dalai Lama was awarded the Nobel Peace Prize for his nonviolent efforts for the liberation of Tibet and his concern for global environmental problems. The Committee’s citation stated, “The Committee wants to emphasize the fact that the Dalai Lama in his struggle for the liberation of Tibet consistently has opposed the use of violence. He has instead advocated peaceful solutions based upon tolerance and mutual respect in order to preserve the historical and cultural heritage of his people.”

In recent years, a number of Western universities and institutions have conferred peace awards and honorary doctorate degrees upon the Dalai Lama in recognition of his distinguished writings in Buddhist philosophy, as well as his outstanding leadership in the service of freedom and peace.

In the run-up to the 2008 Beijing Olympics, unrest broke out in Tibet in anticipation of media attention and increased repression by the Chinese government. The Dalai Lama pleaded for calm and condemned Chinese violence. This was met with frustration by many in Tibet, who considered his comments ineffective, and allegations by the Chinese that the Dalai Lama incited the violence—an accusation that he strongly denies. While the United Nations has passed several resolutions on China, calling for the respect of fundamental human rights and a cessation of human rights violations, and has expressed concern about continuing human rights violations in Tibet, little has been done to resolve the problem. In recent years, proposed resolutions to protect Tibetan human rights have been postponed or reworded to ease any pressure on the Chinese government.

In recent years, Chinese President Hu Jintao has shown no signs of moving toward peace and reconciliation with Tibet. Some say that the Chinese government is just waiting for the Dalai Lama, now 74, to die and thereby finally dispel any lingering hopes for an autonomous, democratic Tibet. In December 2008, the Dalai Lama announced his semi-retirement after having gallstone surgery.

On March 10, 2011, on the 52nd anniversary of his exile from Tibet, the Dalai Lama announced that he would give up his role as Tibet’s political leader. He said the decision came from a long-held belief that the Tibetans needed a freely elected leader.

In 1989 his Holiness was awarded the Nobel Peace Prize for his non-violent struggle for the liberation of Tibet. He has consistently advocated policies of non-violence, even in the face of extreme aggression. He also became the first Nobel Laureate to be recognized for his concern for global environmental problems.

His Holiness has travelled to more than 67 countries spanning 6 continents. He has received over 150 awards, honorary doctorates, prizes, etc., in recognition of his message of peace, non-violence, inter-religious understanding, universal responsibility and compassion. He has also authored or co-authored more than 110 books.

His Holiness has held discussions with heads of different religions and participated in many events promoting inter-religious harmony and understanding.

Since the mid-1980s, His Holiness has engaged in a dialogue with modern scientists, mainly in the fields of psychology, neurobiology, quantum physics and cosmology. This has led to a historic collaboration between Buddhist monks and world-renowned scientists in trying to help individuals achieve peace of mind. It has also resulted in the addition of modern science to the traditional curriculum of Tibetan monastic institutions re-established in exile..

Although you may not always be able to avoid difficult situations,you can modify the extent to which you can suffer by how you choose to respond to the situation.
x
Dalai Lama

difficult respond situations suffer
The purpose of our life needs to be positive. We weren't born with the purpose of causing trouble, harming others. For our life to be of value, I think we must develop basic good human qualities—warmth, kindness, compassion. Then our life becomes meaningful and more peaceful—happier.
x
Dalai Lama

Life positive purpose
Our day-to-day existence is very much alive with hope, although there is no guarantee of our future. There is no guarantee that tomorrow at this time we will be here. But we are working for that purely on the basis of hope. So, we need to make the best use of our time. I believe that the proper utilization of time is this: if you can, serve other [Countinue reading...]
x
Dalai Lama 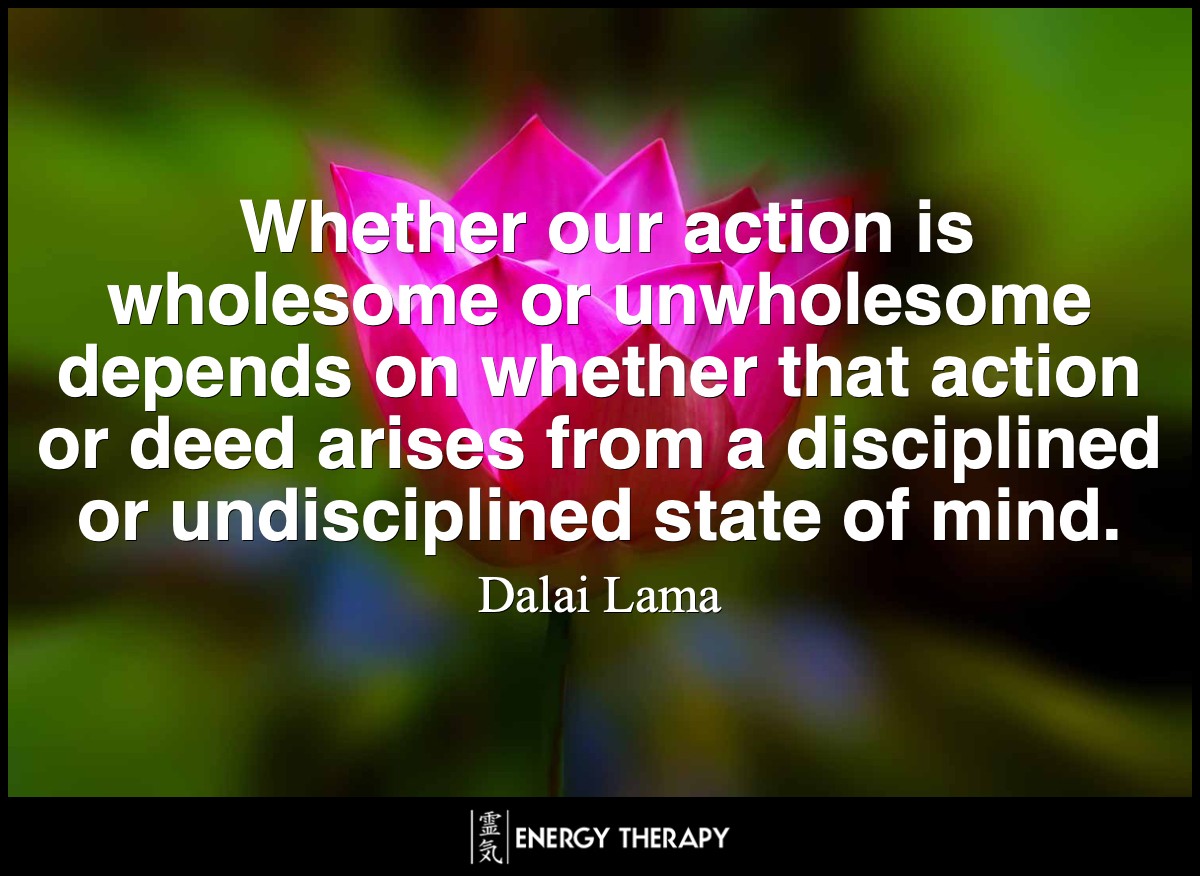 x
Whether our action is wholesome or unwholesome depends on whether that action or deed arises from a disciplined or undisciplined state of [...]
Dalai Lama 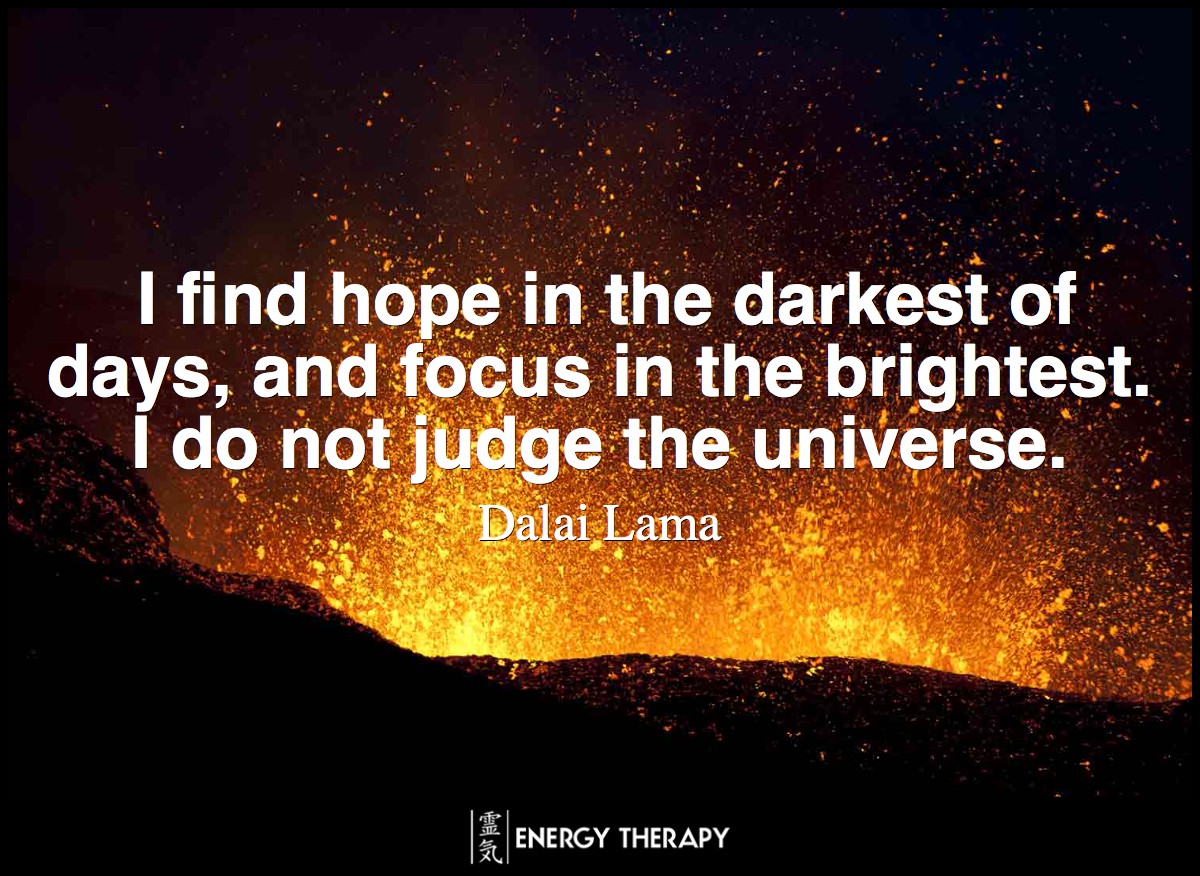 x
I find hope in the darkest of days, and focus in the brightest. I do not judge the universe.
Dalai Lama