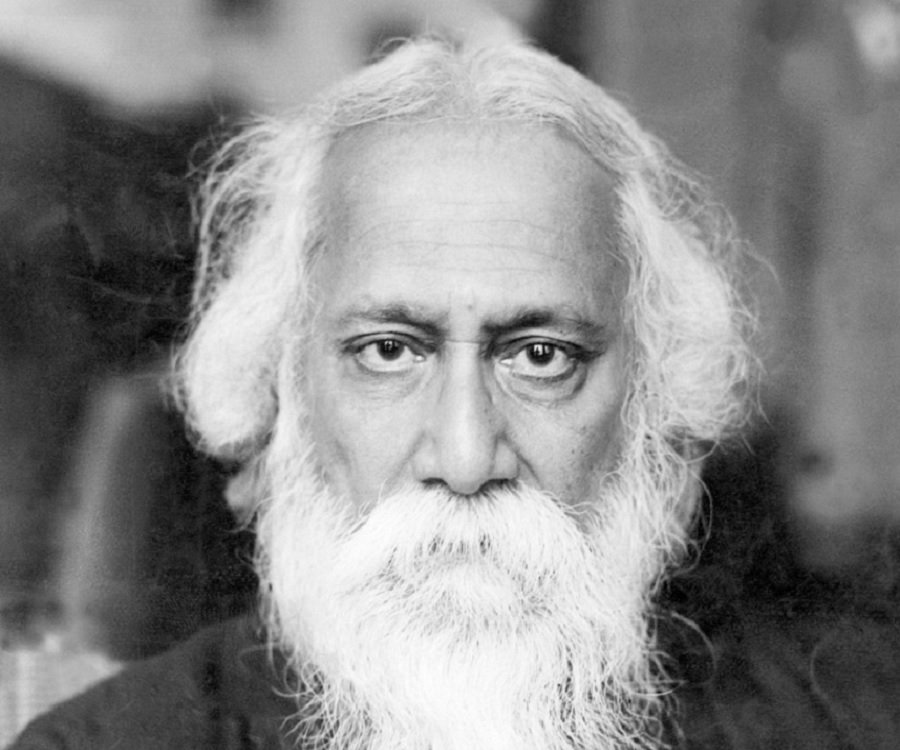 Poet, writer and humanitarian, Rabindranath Tagore was the first Indian to be awarded the Nobel Prize for Literature and he played a key role in the renaissance of modern India. Tagore is most widely known for his poetry, but he was also an accomplished author of novels, short stories, plays and articles. He took an active interest in a widespread range of social, cultural and artistic endeavours.

“So I repeat we never can have a true view of man unless we have a love for him. Civilisation must be judged and prized, not by the amount of power it has developed, but by how much it has evolved and given expression to, by its laws and institutions, the love of humanity.” Sadhana: The Realisation of Life, (1916)

Rabindranath was born on 7 May 1861 Calcutta. His father Debendranath Tagore was a leading light in the Brahmo Samaj – a reforming Hindu organisation which sought to promote a monotheistic interpretation of the Upanishads and move away from the rigidity of Hindu Orthodoxy which they felt was holding back India. Debendranath Tagore also encouraged his family to learn English.

Rabindranath began writing from an early age and impressed with his free-flowing style and spontaneous compositions. He mostly rejected formal schooling; he spent much time being taught at home. In 1878 he travelled to England and sought to study law at University College, London, but he left before finishing the degree.

After returning to India, in 1901, Tagore moved to Shantiniketan to found an ashram which became his focal point for writing and his view on schooling. He chose the name for the ashram – Shantiniketan meaning ‘Abode of Peace’

Tagore was firm friends with Gandhi and admired him very much. But, despite this friendship, he could be critical of his views. For example, he disagreed with Gandhi’s views on Swaraj protests and upbraided Gandhi when Gandhi claimed an earthquake was ‘divine retribution for the mistreatment of Dalits in India.’ Yet despite the frequent divergence of opinions, they could admire each other.

In 1913, Tagore was awarded the Nobel Prize for literature for his work ‘Gitanjali‘ This made his writings internationally known and his fame spread throughout the world. This gave Tagore the opportunity to travel extensively giving lectures and recitals in many different countries. He also became acquainted with many of the leading cultural contemporaries of the day; this included W.B.Yeats, George Bernard Shaw, Romain Rolland, Robert Frost and Albert Einstein.

Tagore had a great love for nature and many of his poems invoke the simple beauties of the natural world. For Tagore, his religion could be found in the wonders and mysteries of nature – as much as in temples and sacred books.

Tagore was a prolific composer of music. He composed over 2,000 songs which have been popularised and sung widely across Bengal. Like his literature, he broke away from classical constraints to offer a great emotive and spiritual appeal. Tagore is unique for being the official composer for the national anthem of two countries – India’s Jana Gana Mana and Bangladesh’s Amar Shonar Bangla.

Tagore was an opponent of British imperialism, though he also felt Indians had a duty to improve their self-education; he said that British rule was partly due to the state India had fallen into. In particular, he was very denigrating about India’s obsession with caste.

In 1919, Tagore returned his knighthood in protest at the Jallianwala Bagh Massacre, in which many peaceful Indian protesters were killed.

Tagore was a polymath, and towards the end of his life he took up art and also pursued an interest in science. Tagore was also very much an internationalist, criticising nationalism, though also writing songs and articles in support of the general principle of the Indian independence movement.

“Patriotism cannot be our final spiritual shelter; my refuge is humanity. I will not buy glass for the price of diamonds, and I will never allow patriotism to triumph over humanity as long as I live. “ Rabindranath Tagore

Although Tagore wrote successfully in all literary genres, he was first of all a poet. Among his fifty and odd volumes of poetry are Manasi (1890) [The Ideal One], Sonar Tari (1894) [The Golden Boat], Gitanjali (1910) [Song Offerings], Gitimalya(1914) [Wreath of Songs], and Balaka (1916) [The Flight of Cranes]. The English renderings of his poetry, which include The Gardener (1913), Fruit-Gathering(1916), and The Fugitive (1921), do not generally correspond to particular volumes in the original Bengali; and in spite of its title, Gitanjali: Song Offerings (1912), the most acclaimed of them, contains poems from other works besides its namesake. Tagore’s major plays are Raja (1910) [The King of the Dark Chamber], Dakghar(1912) [The Post Office], Achalayatan (1912) [The Immovable], Muktadhara (1922) [The Waterfall], and Raktakaravi (1926) [Red Oleanders]. He is the author of several volumes of short stories and a number of novels, among them Gora (1910),Ghare-Baire (1916) [The Home and the World], and Yogayog (1929) [Crosscurrents]. Besides these, he wrote musical dramas, dance dramas, essays of all types, travel diaries, and two autobiographies, one in his middle years and the other shortly before his death in 1941. Tagore also left numerous drawings and paintings, and songs for which he wrote the music himself. 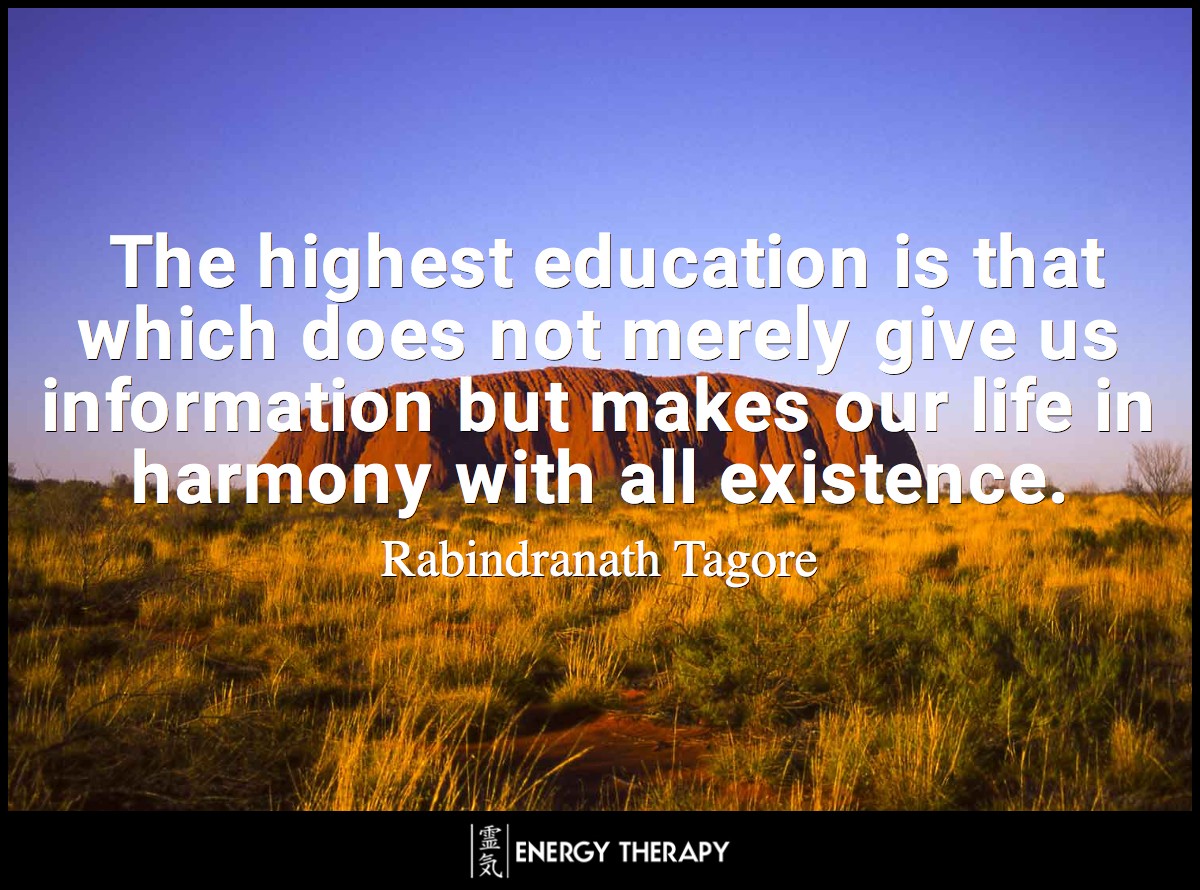 x
The highest education is that which does not merely give us information but makes our life in harmony with all existence.
Rabindranath Tagore 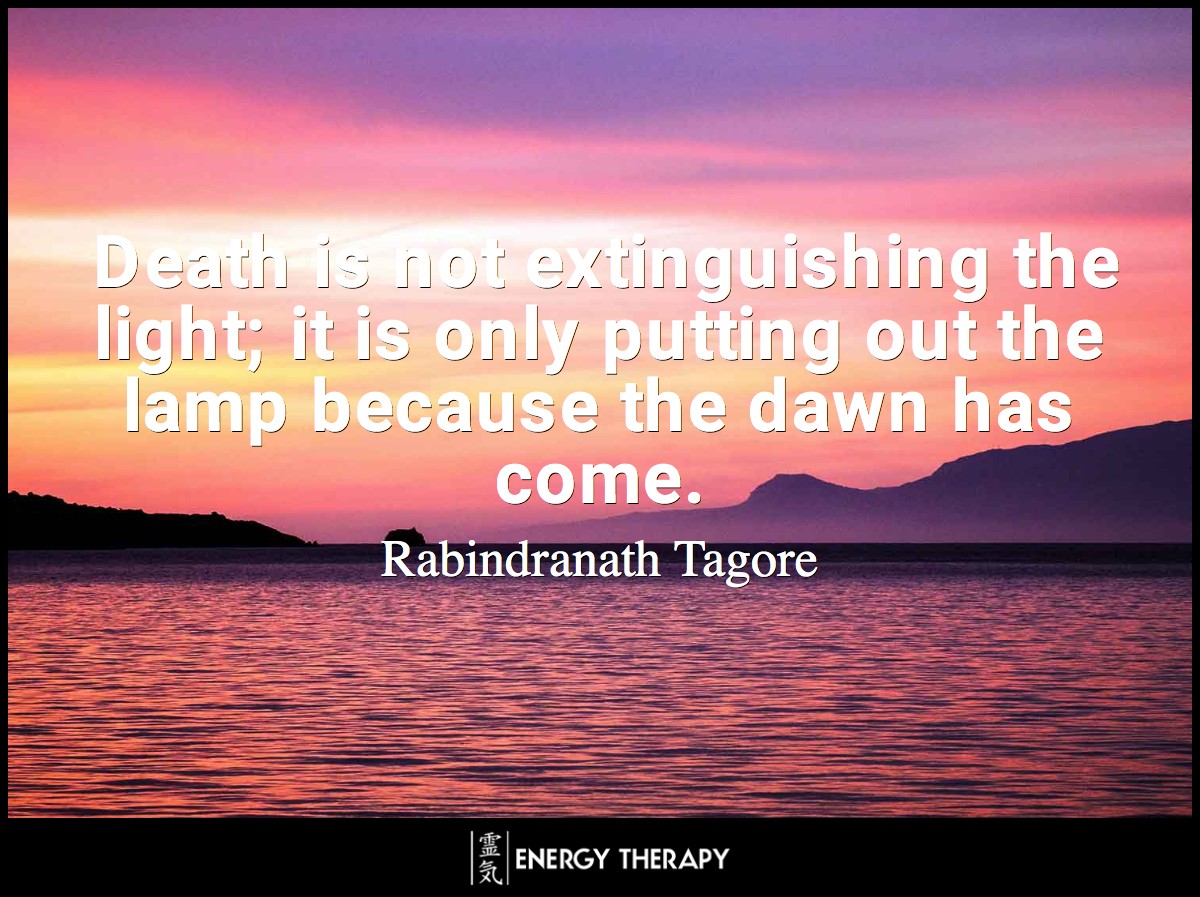 x
Death is not extinguishing the light; it is only putting out the lamp because the dawn has come.
Rabindranath Tagore

dawn Death extinguish lamp light
Let your life lightly dance on the edges of Time like dew on the tip of a leaf.
x
Rabindranath Tagore 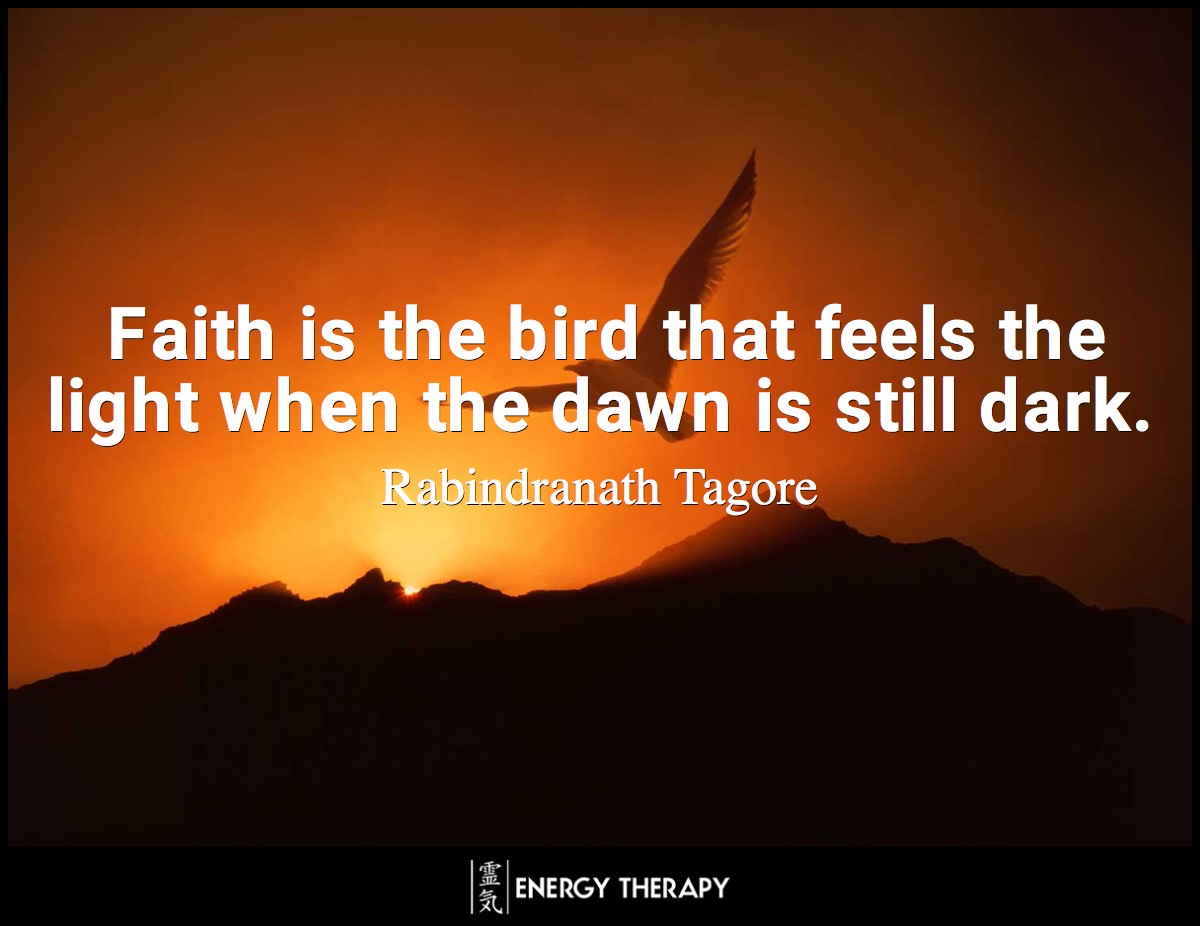 x
Faith is the bird that feels the light when the dawn is still dark.
Rabindranath Tagore 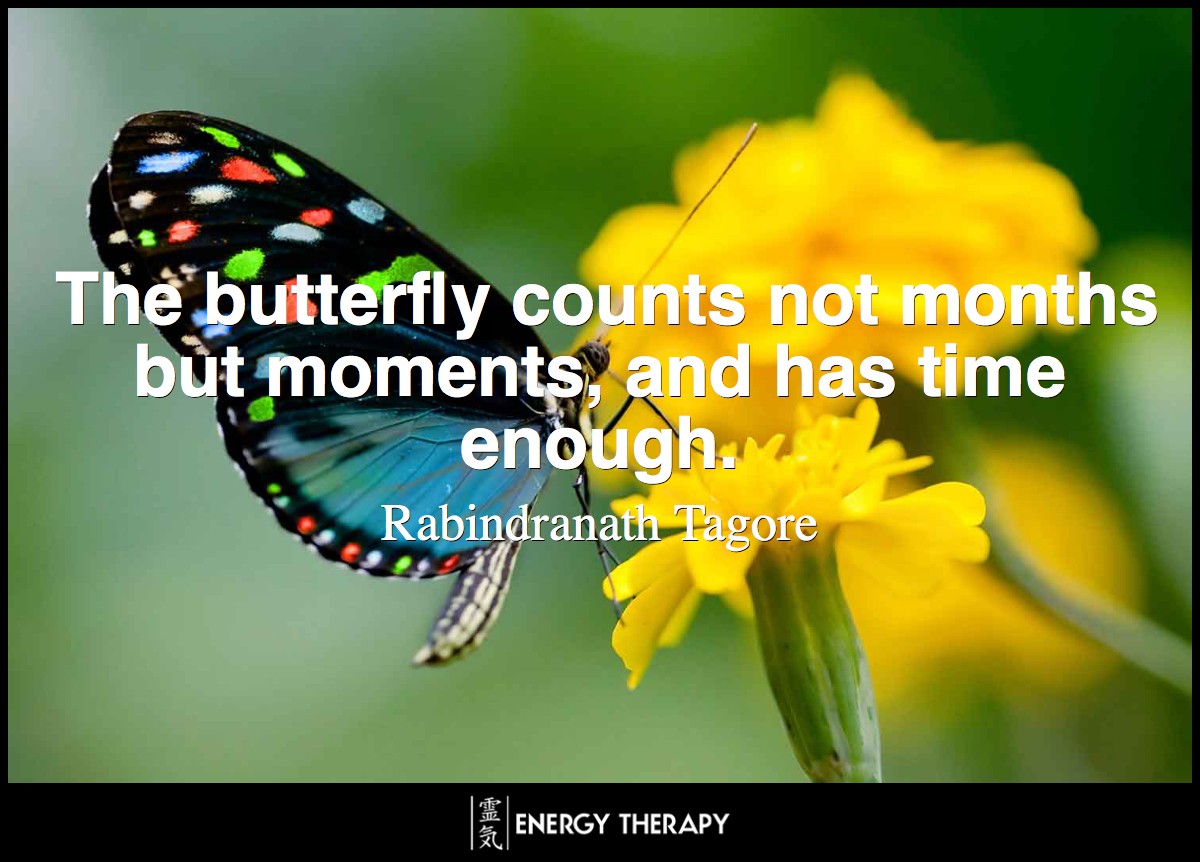 x
The butterfly counts not months but moments, and has time enough.
Rabindranath Tagore 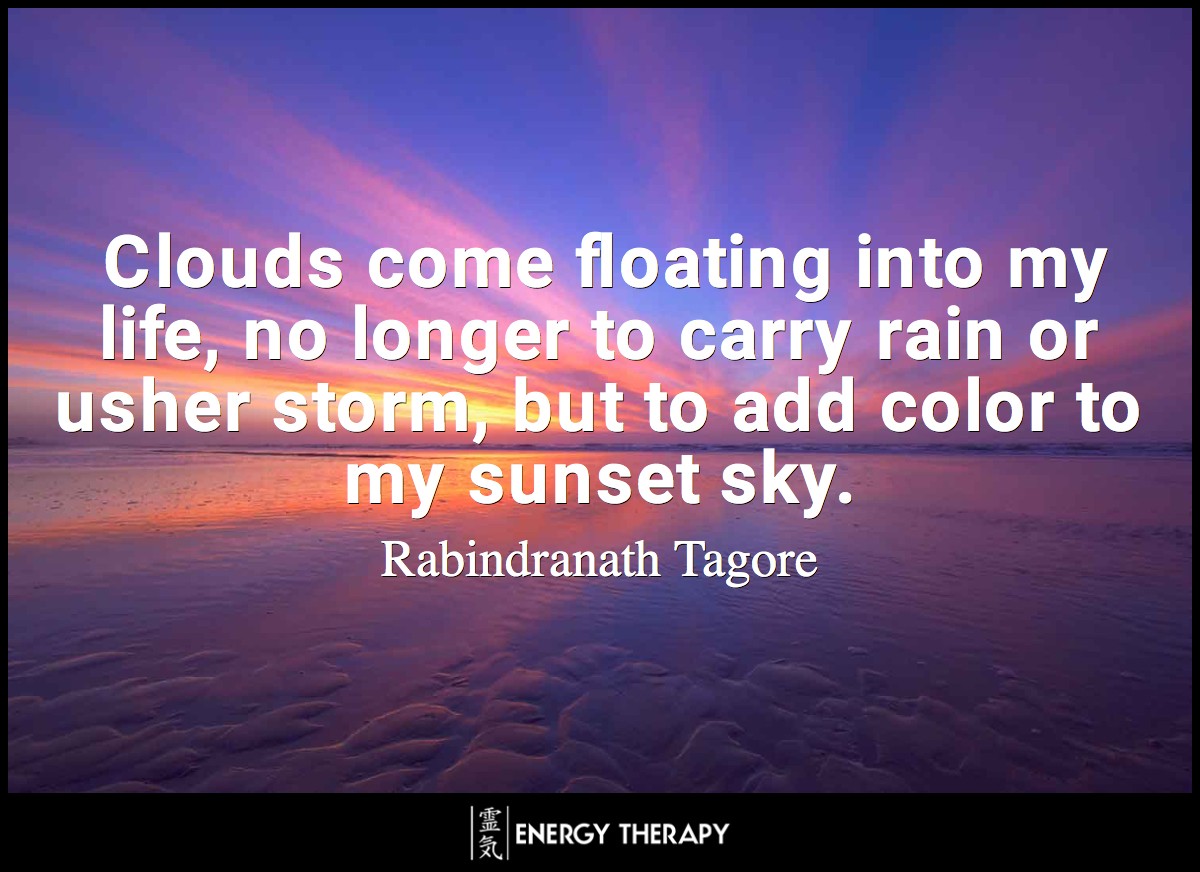 x
Clouds come floating into my life, no longer to carry rain or usher storm, but to add color to my sunset sky.
Rabindranath Tagore