ESP & Animal Communication: A Walk with Lions and a ‘Cheetah Massage’ 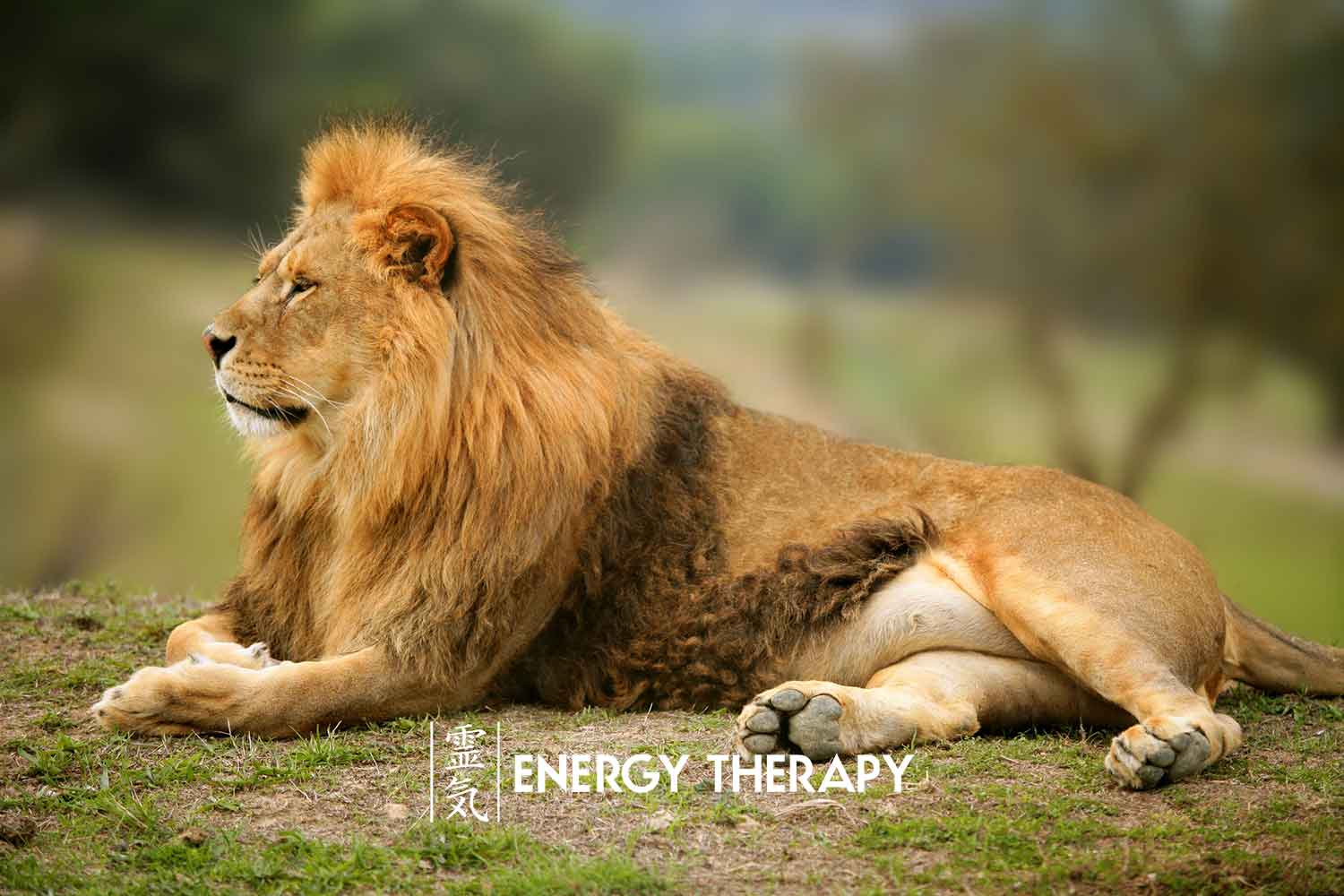 At the level of the energy field, there is much more going on than we consciously know, or care to admit to! For me personally, I’ve always been enthralled by the energy of cats… small ones, and much bigger ones!

When my mother took me to Australia to visit my cousins in Sydney, I was just 3 years old. We visited a Safari park and it just happened to be around the time the lions were being fed. The continuous roaring of the lions was visceral and I immediately felt scared, as any small child would! However, that initial fear gave way to an immense curiosity later on in life!

Since that powerful experience in my early days, I’ve found always had meaningful interactions with domestic cats – they’ve always tended to ‘find me’ when I’ve been in some sort of emotional distress and they have offered me unconditional love without asking anything in return. For example, the first time was when I was around 13 or 14, after I had a big argument with my parents (as most teenagers do!) and stormed out of the house feeling very upset… As I sat on the wall opposite my house, I also felt quite sad about what had happened… and I couldn’t shake my sadness, anger and tears.

Suddenly, a kitten appeared out of nowhere and jumped up on my lap, and then immediately sprung up onto my shoulders and lay flat across my upper back… it lay across on my neck and upper trapezius, if you want to get technical!  I was quite surprised at the antics of this kitten but the affectionate ‘hug’ was very welcome…

As I sat there, I noticed the cat breathing in sync with me and I soon began to feel a warmth spreading across my back and down my torso.  I also started to feel my energy ‘lift’ somehow, and my mood improved.  I turned my head and silently asked ‘what are you doing?’ but there was no response of course!  This beautiful creature simply looked lovingly, and knowingly, into my eyes and we just held each other’s gaze for that time.

After about 10 or 15 minutes, I felt enormous relief as ‘negative energy’ left my energy field… and then quick as a flash, the kitten jumped down, caressed my legs as a last goodbye and then wandered off..

I looked for her every day for about 2 weeks but there was no sign of her.

It was one of those moments that make you realise the Universe has your back… later, I realised it was a sign from the Shamanic path, an awakening, and the beginning of a long journey into other worlds beyond the five senses that keep so many trapped in a small, ‘safe’ reality that really has very little do with the nature of how things really are.

Fast forward to 2013 and I was now running my own successful practice in Energy Medicine, having transitioned from a more ‘traditional’ and accepted career working for dot com in Soho, London.

I’d already facilitated truly amazing healing responses through energy work for clients and animals. I was still fascinated by the power of psychic, non-verbal communication.

My own unique experience with Big Cats

In December 2013, my wife and I went to Mauritius for a holiday and I was presented with a unique chance to fulfill a personal dream! We found a small game reserve where there was an opportunity to ‘walk with the lions’ and be ‘up close and personal’ with some cheetahs!

I ‘knew’ I would not have any fear of lions, unlike my previous time as a small child… but how did I know?  I had never been in front of an un-caged lion!  Even though these animals were not fully wild, they were by no means ‘tame’!

Deep down, there was only excitement at the thought of personal interaction.  Indeed, Jennifer and I opted to do a private walk because we felt being with other tourists might disrupt our experience if they lacked respect or acted out of fear. Ben, the lead ranger, mentioned that it is common for many people to experience a great deal of fear whenever they see a lion run towards them and there’s no cage to protect them!  They sign up for this walk out of curiosity but then panic! Many of them run behind the ranger, an action which triggers the cat’s innate predatory response and creates a completely different sort of dynamic!

When I finally saw the two year old, adolescent male white lion and a 10 month old tawny cub run towards us, I felt nothing but excitement and joy at greeting them.  In fact, the rangers were more nervous about protecting us from this boisterous pair than we were about being with them!

For me, it was a dream fulfilled because of my affinity with cats and also the day-to-day healing work I do with people and animals as an ‘intuitive’ – sensing energy comes naturally. The first thing I noticed apart from the raw strength was their smell. Lions have a powerful smell, and that’s before they urinate everywhere to mark their territory!

I thought that was incredible enough, but then we got to interact with two cheetahs after our walk too! 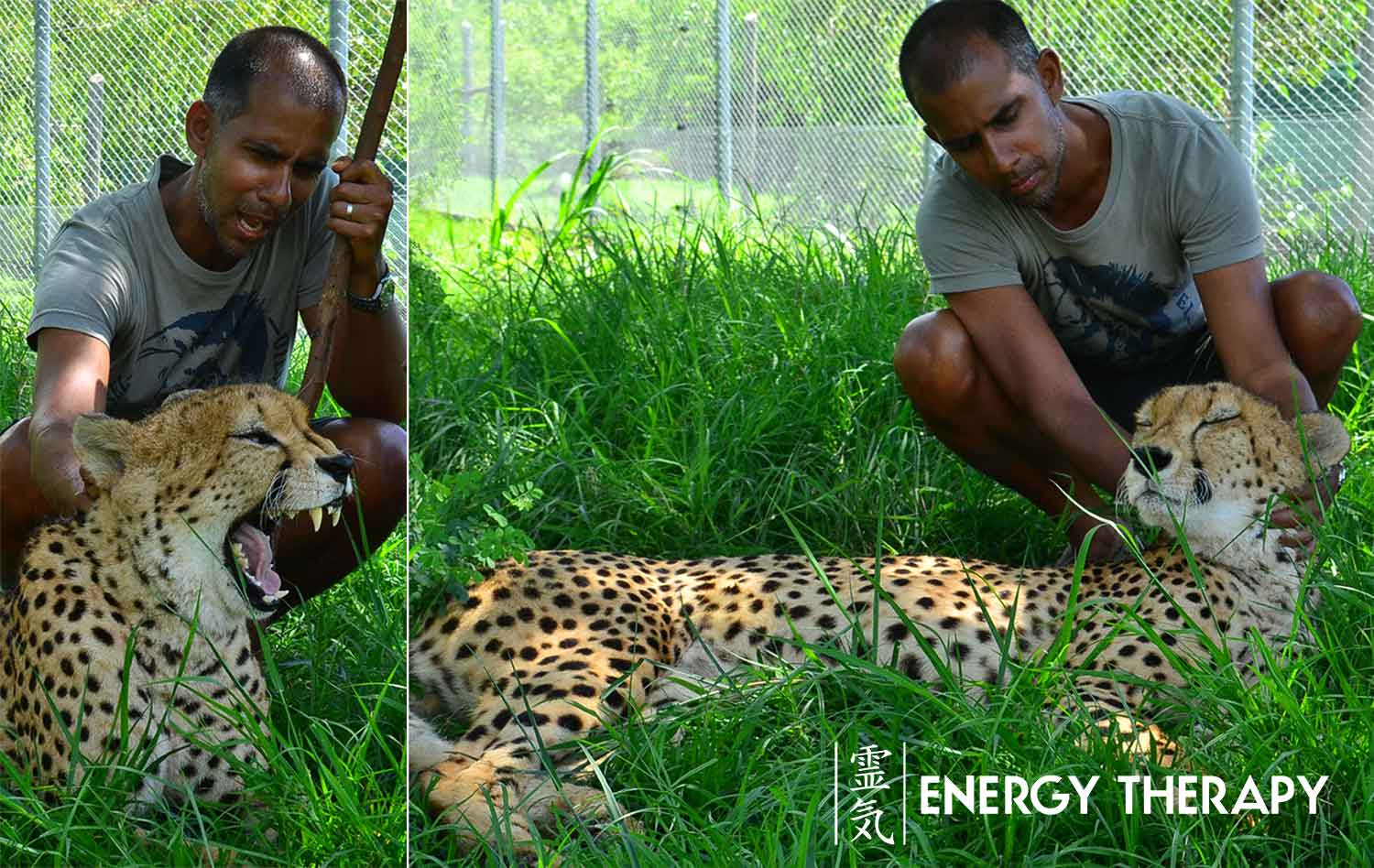 Whilst the ranger was reluctant at first, I appreciated that he allowed me to demonstrate a true ‘energy connection’ and bond with the cats…

When we entered the cheetah park, there were two lying on the grass.  I could tell one was moody and not to be approached long before the rangers told us not to approach. The other one had very open energy, and I was keen to see if she would be receptive to a ‘cat massage’. I had done this type of massage on smaller cats, and I figured that the cheetah would be the same…

I approached with respect, and ‘asked’ permission non-verbally. My body told me ‘yes’…

Firstly, I bonded with the wild cat by ‘roaring’ with her, synchronously our energy fields.  Then, drawing a deep breath, I put my hands on the back of her head and on her neck and simply allowed energy to flow through my hands…

She received the healing energy very well as her eyes closed and her whole body purred and visibly relaxed. At no point was there any sense of danger – in fact, I felt calm and grounded – and totally safe!

Someone once asked the animal behaviourist Kevin Richardson, regularly seen playing with fully grown male and female lions, ‘what if you die whilst working with these Big Cats?’

He replied that he would be doing what he loved most and so it would not matter!

For me, his attitude shows alignment with the love and respect that is necessary for our planet and development of a new inter-species communication that will help nature thrive again.  This is why ESP and animal communication is vital at this time of awakening.