Epigenetics vs Genetic Determinism: It’s Your Choice How You Face A Life-Threatening Disease 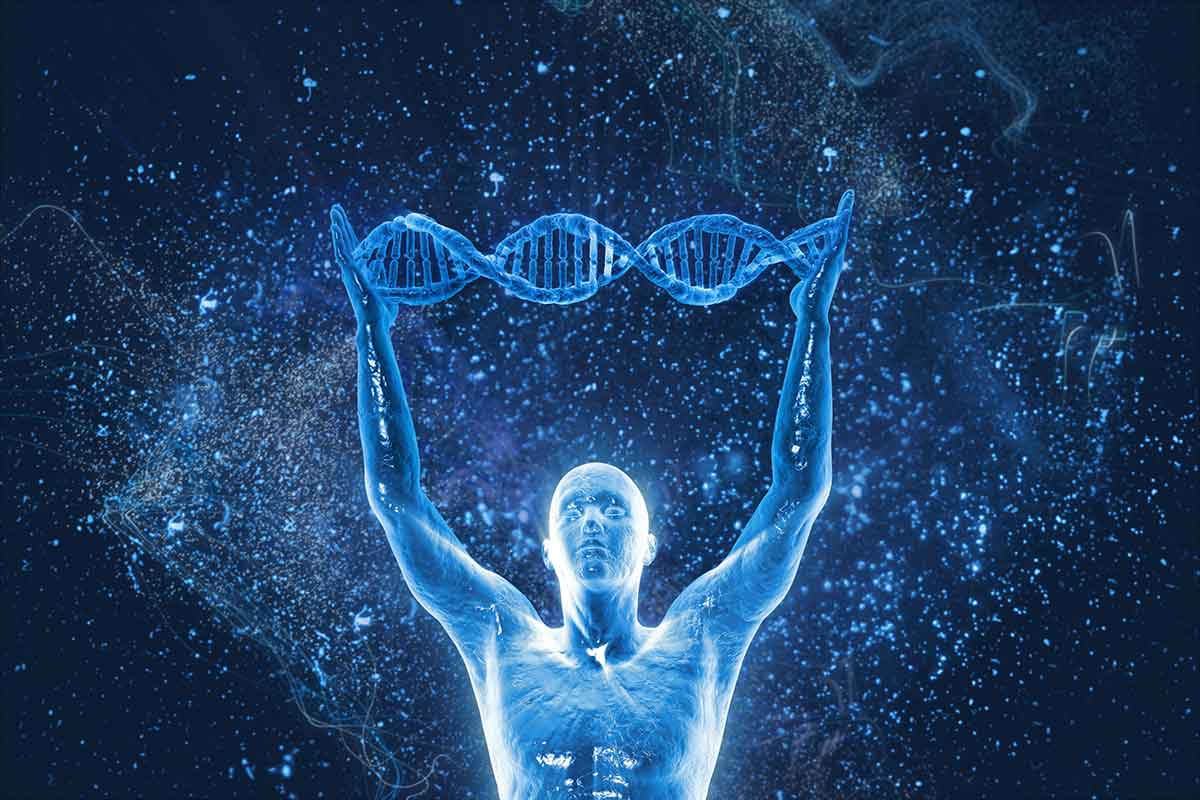 How much control do we really have over our body’s health? This question has intrigued and puzzled mankind since the beginning of time!

The current biology laid down in most text books is known as ‘genetic determinism’, a persistent, pervasive idea that your genes decide your fate.  Like all hypnoses, this idea is rather difficult to break for most people.

Genetic determinism leaves you helpless since it implies that you have very little control over your health if your body develops a disease, apart from taking meds and having invasive surgery – all the while ignoring the fact that this is a belief, not a fact.

The trillion dollar industry doesn’t want us to wake up.  Trust me.

I have the privilege of growing up in a medical family, yet exploring yoga and energy medicine simultaneously.  Guess which path I chose as I looked deeper into both.

Congenital disease – where the foetus develops abnormally – is very low accounting for less than 5% of all births worldwide, and even some of these birth defects will be caused or triggered by environmental factors rather than being a spontaneous mutation.

Today, we are witnessing a slow but sure revolution in health consciousness, despite mainstream beliefs and practices that are reluctant, if not downright opposed, to change.

Some scientists and leaders exploring the cutting-edge of the mind-body continuum are showing us that changing our biology from disease to health may be as simple as changing our innermost thoughts and beliefs, alongside other key environmental factors including lifestyle choices.

Yet this is nothing new… ancient wisdom has also said this.

Now we are simply saying it in a new way, but the core message is still the same.

“Contrary to what many people are being led to believe, a lot of emphasis placed on genes determining human behavior is nothing but theory and doctrine. We are free to make decisions that impact our lives and those of others. Our beliefs can change our biology. We have the power to heal ourselves, increase our feelings of self-worth and improve our emotional state.” Konstantin Eriksen

It’s surely not easy when we face simple challenges to our personal health, yet alone a disease that is life threatening, so I’d firstly like to celebrate the courage and honesty of all people everywhere facing serious diseases such as cancer, which seems to be on the increase in the West despite our advances in materialistic science.

If you suddenly experience pain, severe fatigue or something just doesn’t feel right, then it is critical to ‘walk with awareness’ and get it checked out by a doctor. This is a natural first step.

Yet once diagnosed with a disease — life-threatening or otherwise — how each of us chooses to treat it is a personal choice.

What astounds me is that personal choice is usually eroded because of a medical, autocratic system that guilt trips patients if they don’t comply with ‘standard protocol’.

Any ‘out of the box’ decision in terms of their own health is often discouraged, and even undermined!

Some doctors can be downright disparaging if anything goes against their ingrained medical beliefs. Not all doctors are like this, but many are, including senior ranking oncologists who won’t tolerate deviation from the norm.

Not having traditional chemotherapy and radiation is too often portrayed as a reckless choice, even though over 97% of those people having it will die anyway, and suffer even more unnecessary trauma because of the highly toxic methods being used!

Why is Chemo still used?

According to a report by Morgan, Ward, and Barton: “The contribution of cytotoxic chemotherapy to 5-year survival in adult malignancies. … survival in adults was estimated to be 2.3% in Australia and 2.1% in the USA.“

Read those shocking statistics about the ‘success rate’ of chemo again.

Did you know that it is a well known fact that the vast majority of oncologists will not take chemotherapy if they suffer from cancer themselves! Nor would they allow their families to take it. So, it’s a question of “do as I say, but not as I do!”

Many people in society will still prefer to be follow whatever medical treatment is offered, even if it is known to be harmful to their health, due to socialised norms in behaviour and persistent media stories about chemotherapy saving yet another person’s life! 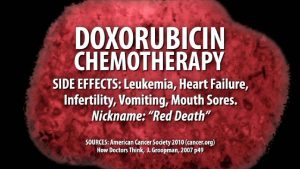 Yes, it’s certainly a miracle with a 2% success rate.. so maybe they should focus on that statistic. Or the fact that the ‘success’ of chemo is determined by a five year window. So, if you die in your sixth year after having chemo, you’re still classified as a winner! Dead, mind you…

When people wake up to the disturbing fact that the Pharmaceutical Industry and FDA have knowingly suppressed Cannbis Oil (“RSO”) as a natural and valid treatment for cancer for over 40 years, as well engaging in hostile treatment of their own kind (read about the continual harassment of Doctor Burzynski in Texas for treating cancer with a revolutionary new treatment using ‘Antineoplastons’) it becomes alarmingly obvious that not only is our system of treating cancer (and other diseases) severely out of date but that the approaches being used are highly questionable since huge monetary interests are involved.

Chemotherapy and radiation fail children with brain stem gliomas — with the only known medical exception being the treatment offered by Dr. Burzynski. Yet he has been needlessly harassed for the past four decades by both the FDA and Texas Medical Board, taken before a grand jury five times but without indictment. Why?

Most likely because Dr. Burzynski holds the patents and it seems that Big Pharma does not want one man to have that much power! Again, admitting that chemotherapy does more harm than good would seriously undermine the use of chemotherapy worldwide, and the trillion dollar industry would come crashing down to the ground overnight.

It’s a fact that Big Business makes obscene profits every time someone follows ‘standard protocol’ without questioning it, and there continues to be a gross amount of money being made at the expense of people’s lives.

Did you know that chemotherapy actually has the side effect of “causing cancer” as it destroys healthy cells?  Chemotherapy is a self defeating immune therapy as most chemotherapeutic drugs decrease white cell counts.

Where, exactly, is the ‘therapy’ in that?

Case histories of terrible side effects are not widely available to the public, and cancer patients feel unduly pressurised to go along with what they see as the ‘responsible choice‘, mainly due to fear of being ostracized by their oncologist and hospital staff if they pursue any other course of treatment that does not sit within the strict parameters laid down before them.

Some people want to go down the chemotherapy route… it’s their choice and that’s fine.

However, at the end of the day, isn’t it better for each patient to be allowed to find an integrated approach where they have a real say in what happens and their own healing process beyond medical ‘belief systems’ and entrenched commercial interests that are hidden outside of public awareness?

Can our bodies heal from severe diseases?

We must learn to listen to our own bodies and the new research in biology (‘epigenetics’) which tells us that our bodies can heal naturally.

This approach may not work in all cases but bodies can certainly repair themselves without invasive medical intervention… in the 1970s Louise Hay was diagnosed with cancer of the vagina, and was given just a few months to live. She healed herself without the need for medical intervention!

More recently, Anita Moojani had an NDE and spontaneously healed from Stage 4 Terminal Cancer, going on to write about her experiences in her bestselling book ‘Dying To Be Me‘,

A kid called Jared, known as the “Kid Against Chemo” on Facebook was diagnosed with stage 4 Hodgkin’s Lymphoma in July 2014. After doing ONE round of chemo, he experienced such severe side effects that he knew that he would die if standard treatment continued. Sores, severe bone pain, blurred vision, everything tasting like metal, losing 16 pounds in 2 weeks, nausea and more…

He was categorically told that he would die within 6 months without the chemo but thankfully he didn’t give up. His mother left her job and researched like crazy about alternative methods… he started juicing, eating organic and detoxing (which included infrared sauna,rebounding,coffee enemas). Jared started working with an energy healer, and also a naturopath for supplements and guidance. He also took time to pray… and he is now cancer free!

All his tests are normal and the tumors are gone!

The establishment told him that he might live 5 years after chemo and radiation but he was astute enough to ask them, “with what quality of life?”

Many people have gone down alternative pathways to healing and conquered cancer, and other diseases – but this fact is conveniently ignored time and again.

Some people even get angry when you suggest that chemotherapy is not effective as a treatment, despite the colossal evidence against it – and those same people get mad when alternative therapies are mentioned because mainstream media takes one or two high profile cases that failed and wrongly magnify them out of proportion.

Steve Jobs is an example of this.

Making a mountain out of molehill serves a very greedy corporate agenda which pays mainstream media to keep running stories that promote the current bias and propanda.

Even if alternative or integrated approaches don’t work at the end of the day, they are certainly no worse than the current medical paradigm of ‘poison, cut and burn‘.

Vitally, alternative approaches support the patient in his/her choices and they don’t cause further grievous harm to mind, body and spirit at a time when nurturing care is needed.

I’ve seen too many close friends and family members disintegrate and then die from conventional cancer treatment to ignore the inconvenient truth that chemo doesn’t work the vast majority of the time.

We must look more carefully at what we are choosing, and why. What are the hidden agendas at play, influencing us at practically every turn?

Asking direct questions to authority figures who are part of a locked-in system is the path of wisdom and the only way we will be free from the tyranny of Big Business agendas and Big Pharma’s tentacles which span the globe.