How to Clean Your Arteries With One Simple Fruit 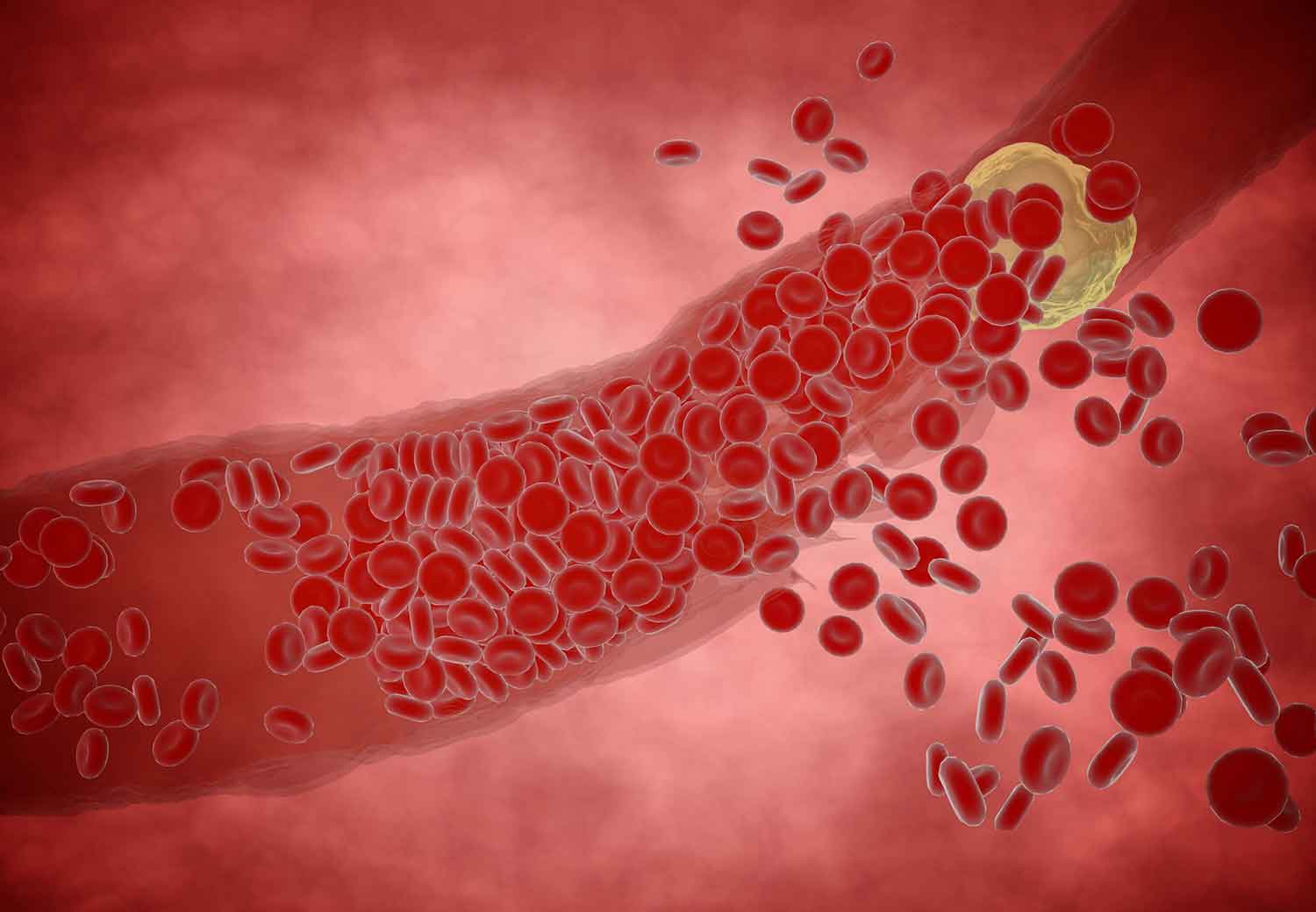 The future of cardiovascular disease prevention and treatment will not be found in your medicine cabinet, rather in your kitchen cupboard or in your back yard growing on a tree

A study published in the journal Atherosclerosis confirms that pomegranate extract may prevent and/or reverse the primary pathology associated with cardiac mortality: the progressive thickening of the coronary arteries caused by the accumulation of fatty materials known as atherosclerosis.

Mice with a genetic susceptibility towards spontaneous coronary artery blockages were given pomegranate extract via their drinking water for two weeks, beginning at three weeks of age. Despite the fact that pomegranate treatment actually increased cholesterol levels associated with very low density lipoprotein-sized particles, the treatment both reduced the size of the atherosclerotic plaques in the aortic sinus (the dilated opening above the aortic valve) and reduced the proportion of coronary arteries with occlusive atherosclerotic plaques.

How can something as benign and commonplace as a fruit extract reverse so many aspects of coronary artery disease, simultaneously, as evidenced by the study above? The answer may lie in the fact that our ancestors co-evolved with certain foods (fruits in particular) for so long that a lack of adequate quantities of these foods may directly result in deteriorating organ function. Indeed, two-time Nobel Prize winner Linus Pauling argued that vitamin C deficiency is a fundamental cause of cardiovascular disease, owing to the fact that our hominid primate ancestors once had year-round access to fruits, and as a result lost the ability to synthesize it.

There’s another obvious clue as to how pomegranate may work its artery opening magic. Anyone who has ever tasted pomegranate, or consumed the juice, knows it has a remarkable astringency, giving your mouth and gums that dry, puckering mouth feel. This cleansing sensation is technically caused, as with all astringents, by shrinking and disinfecting your mucous membranes.

Anyone who drinks pomegranate juice, or is lucky enough to eat one fresh, can understand why it is so effective at cleansing the circulatory system. Nature certainly planted enough poetic visual clues there for us: its juice looks like blood, and it does resemble a multi-chambered heart, at least when you consider its appearance in comparison to most other fruits.

Indeed, your mouth and your arteries are lined with the same cell type: epithelial cells. Together, they make up the epithelium, one of four basic tissue types within animals, along with connective tissue, muscle tissue and nervous tissue, and which comprises the interior walls of the entire circulatory system. So, when you feel that amazing cleansing effect in your mouth, this is in fact akin to what your circulatory system — and the epithelium/endothelium lining the inside of your veins and arteries — “feels” as well. 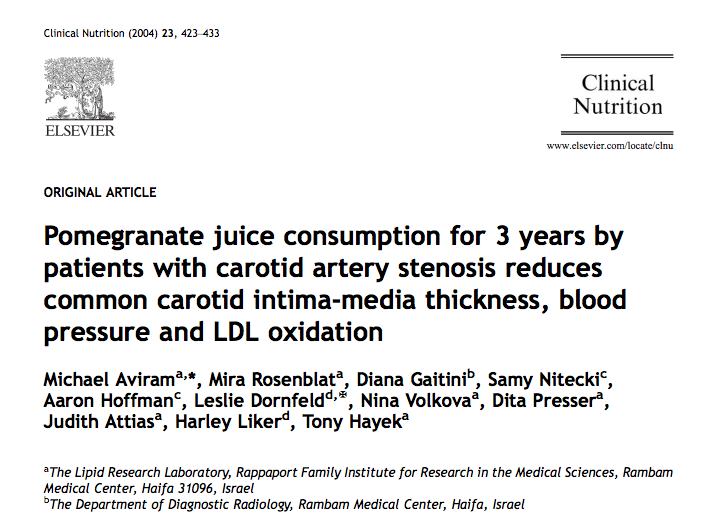 The study consisted of nineteen patients, 5 women and 14 men, aged 65-75, non-smokers. They were randomized to receive either pomegranate juice or placebo. Ten patients were in the pomegranate juice treatment group and 9 patients that did not consume pomegranate juice were in the control group. Both groups were matched with similar blood lipid and glucose concentrations, blood pressure, and with similar medication regimens which consisted of blood-pressure lowering (e.g. ACE inhibitors, β-blockers, or calcium channel blockers) and lipid lowering drugs (e.g. statins).

The ten patients in the treatment group group received 8.11 ounces (240 ml) of pomegranate juice per day, for a period of 1 year, and five out of them agreed to continue for up to 3 years.

The remarkable results were reported as follows:

The mean intima media thickness the left and right common carotid arteries in severe carotid artery stenosis patients that consumed pomegranate juice for up to 1 year was reduced after 3, 6, 9 and 12 months of pomegranate juice consumption by 13%, 22%, 26% and 35%, respectively, in comparison to baseline values.”

You can only imagine what would happen if a pharmaceutical drug was shown to reverse plaque build up in the carotid arteries by 13% in just 3 months! This drug would be lauded the life-saving miracle drug, and not only would be promoted and sold successfully as a multi-billion dollar blockbuster, but discussion would inevitably follow as to why it should be mandated.

While these results are impressive, if not altogether groundbreaking for the field of cardiology, they may be even better than revealed in the stated therapeutic outcomes above. When one factors in that the carotid artery stenosis increased 9% within 1 year in the control group, the pomegranate intervention group may have seen even better results than indicated by the measured regression in intima media thickness alone. That is, if we assume that the pomegranate group had received no treatment, the thickening of their carotid arteries would have continued to progress like the control group at a rate of 9% a year, i.e. 18% within 2 years, 27% within 3 years. This could be interpreted to mean that after 3 years of pomegranate treatment, for instance, the thickening of the arteries would have been reduced over 60% beyond what would have occurred had the natural progression of the disease been allowed to continue unabated.

Essentially these results reveal that not only does pomegranate reduce the lesion size in the carotid arteries, but “the lesion itself may be considered less atherogenic after PJ consumption, as its cholesterol and oxidized lipid content decreased, and since its ability to oxidize LDL was significantly reduced.”

This finding is quite revolutionary, as presently, the dangers of carotid artery stenosis are understood primarily through the lesion size and not by assessing for the quality of that lesion. This dovetails with the concept that the sheer quantity of lipoproteins (i.e. “cholesterol”) in the blood can not accurately reveal whether those lipoproteins are actually harmful (atherogenic); rather, if lipoproteins are oxidized (e.g. ox-LDL) they can be harmful (or representative of a more systemic bodily imbalance), whereas non-oxidized low density lipoprotein may be considered entirely benign, if not indispensable for cardiovascular and body wide health. Indeed, in this study the researchers found the pomegranate group had increased levels of triglycerides and very low density lipoprotein, again, underscoring that the anti-atherosclerotic properties likely have more to do with the improved quality of the physiological milieu within which all our lipoproteins operate than the number of them, in and of itself.

Finally, it should be pointed out that all the patients in this study were undergoing conventional, drug-based care for cardiovascular disease, e.g. cholesterol- and blood pressure-lowering agents. Not only did the pomegranate treatment not appear to interfere with their drugs, making it a suitable complementary/adjunct therapy for those on pharmaceuticals, but it should be pointed out that the control group’s condition got progressively worse (e.g. the mean IMT increased 9% within 1 year), speaking to just how ineffective drugs are, or how they may even contribute to the acceleration of the disease process itself.

Pomegranate’s value in cardiovascular health may be quiet broad, as evidenced by the following experimentally confirmed properties: