Why and How To Detox From Heavy Metals 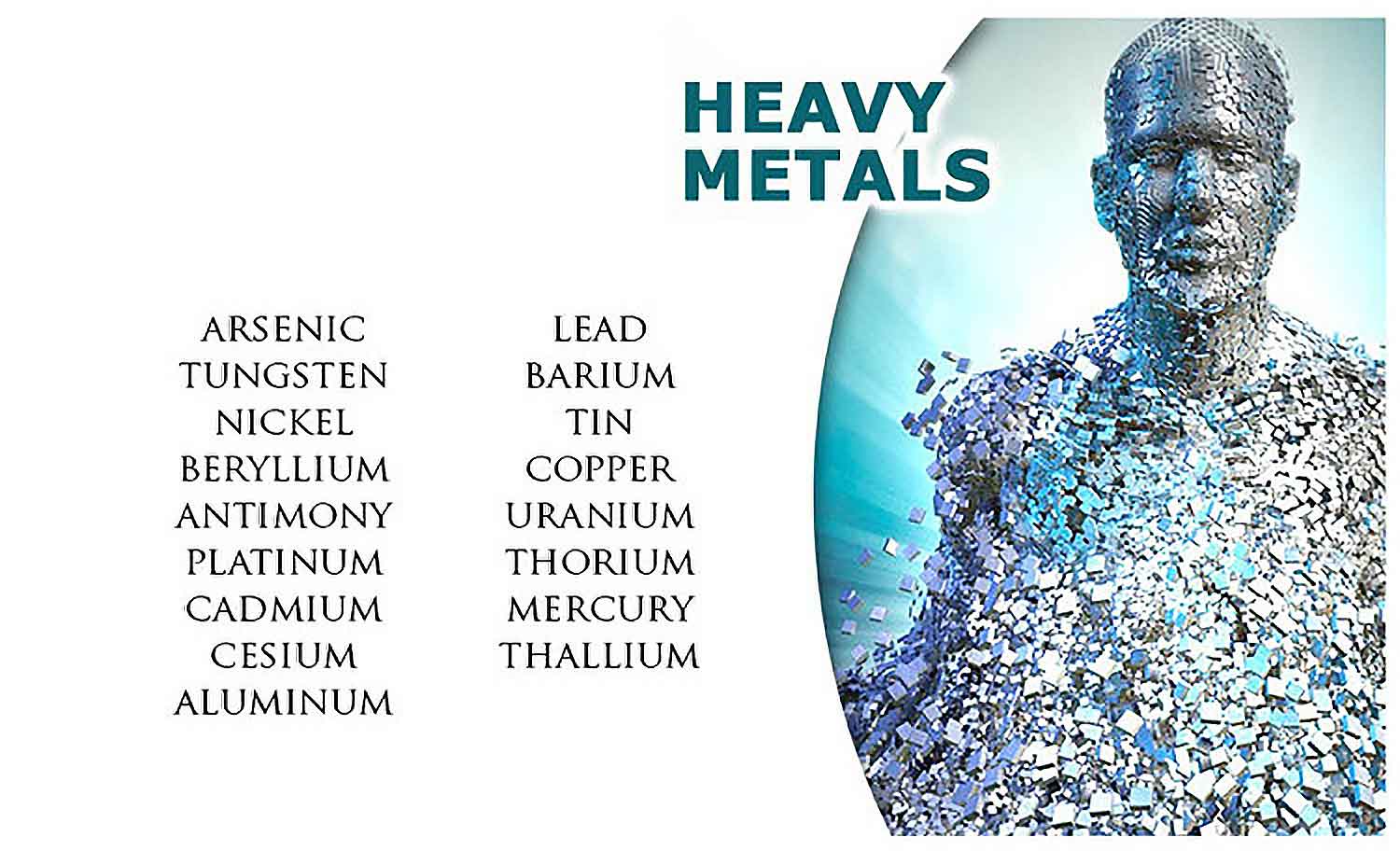 Toxic heavy metals cause severe disruption to the well-being of our bodies – and, today, most of us will take in a certain amount of these toxic heavy metals from our environment, including so-called ‘safe’ vaccines.

If you want to heal from the chronic illnesses and mystery illnesses that doctors label but can’t treat, removing the heavy metals in your body and brain is a vital place to start.

According to Anthony William, heavy metals (e.g. mercury, aluminum, copper, cadmium, lead, arsenic, nickel, chrome, alloy, and steel) can cause ADHD, ADD, autism, depression, OCD, mood disorders, Alzheimer’s, focus, concentration and memory loss issues, and much more – and they can also increase any viral or bacterial issues you may be battling.

Additionally, he points out that when viruses such as Epstein-Barr and shingles feed off toxic heavy metals, this can produce symptoms such as tingling, numbness, fatigue, anxiety, heart palpitations, ringing in the ears, dizziness and vertigo, as well as neck pain, knee pain, foot pain, pain in the back of the head, and a variety of other aches and pains that are often attributed to other causes.

Toxic heavy metals have been inside many of us since before we were born. The heavy metals we are born with are passed on through our family line and can be up to a thousand years old. Although mercury was in the earth well before then, it wasn’t until two to three thousand years ago that people started to mine mercury and gather it for various uses.

Mercury mining is the reason the mercury inside of us can be up to eighty generations old! Sounds crazy but it’s true.

As this old mercury has been passed from generation to generation, each succeeding generation grows more intolerant to the toxic heavy metal.

Over time toxic heavy metals can oxidize, causing damage to surrounding tissue and promoting inflammation. They literally poison our bodies, and can inflict damage on virtually every system and organ, including our brain, liver, digestive system, and other parts of our nervous system.

Toxic heavy metals put an immense burden on our immune system, leaving us vulnerable to a variety of illnesses and are also a form of neurotoxin – a poison that disrupts nerve function and confuses your immune system 0 which can leave your health in a compromised state.

In the 1700s and 1800s, mercury elixirs were given out in conventional medical offices – talk about quackery!  If you went to a conventional doctor for anything from a stomach ache to a broken leg, you were given a big glass of water mixed with mercury.

This tonic was mandatory upon entering a conventional doctors’ office regardless of your age or health issue.

The effects were devastating, and many patients lost their families, their work, and their sanity.

Something the medical industry doesn’t talk about much today, do they?

Mercury – and other heavy metals – sadly don’t leave our bodies unless we know exactly how to detoxify them.

We are not only dealing with inherited mercury, but new sources of toxic mercury that enter our bodies through environmental exposure. Mercury is falling out of the sky, it’s also in many water supplies, in non-organic foods, in pesticides, and even in some so-called ‘medicines’ – vaccines.

Have you ever eaten a can of tuna? Have you had pesticides sprayed inside your home or lived in a heavily sprayed apartment complex?  Have you been on a plane that’s been sprayed? These are just a few ways in which you might have encountered this toxic heavy metal.

How Mercury Damages Our Bodies

Mercury gathers together in the body. If you have inherited mercury or been exposed to it in your lifetime, it will find any new mercury you come into contact with and collect together in your system.

Fact: mercury becomes more toxic as it builds on itself over time.

This occurrence can be seen by the worsening of symptoms throughout someone’s life, such as an increase in OCD, anxiety, depression, or memory loss.

Heavy metals reside in unique areas of the brain and body for each individual, so one person may have heavy metals in the left temporal lobe while someone else may have a pocket near the pituitary gland, and this is why people experience different heavy metal symptoms at varying levels of severity.

Every “body” is different.

Why You Need To Remove Heavy Metals

Why is a heavy metal detox essential for prolonged health and vitality?  Without taking action to remove toxic metals, your neurotransmitters will be short circuiting and burning out.

Just like a wire runs “hot” when it encounters resistance, the same thing happens to your brain when heavy metals are present, bringing about symptoms like brain fog, confusion, chronic fatigue and much much more.

How To Detox Today

Coriander: Goes deep into hard-to-reach places, extracting metals from yesteryear (so it’s great for that mercury inheritance you’re carrying around!). Blend one cup in a smoothie or juice, or add to salad or guacamole.

Barley grass juice extract powder: prepares the mercury for complete absorption by the spirulina. This nutritive grass has the ability to draw heavy metals out of your spleen, intestinal tract, pancreas, thyroid, and reproductive system. Drink 1-2 teaspoons mixed into coconut water or juice.

Atlantic dulse: In addition to mercury, this edible seaweed binds to lead, aluminum, copper, cadmium, and nickel. Unlike other seaweeds, Atlantic dulse is a powerful force for removing mercury on its own. Atlantic dulse goes into deep, hidden places of the digestive tract and gut, seeking out mercury, binding to it, and never releasing it until it leaves the body. Eat two tablespoons of flakes daily, or an equal amount of strips if it’s in whole-leaf form.

Note: As it comes from the ocean, if you are concerned about the dulse itself having mercury, be aware that Atlantic sea dulse will not release any mercury it might possess into the body. It holds on to the mercury as it works its way through, and even grabs onto other metals along the way and drives them out as well. Atlantic dulse is a critical part of the team because it can hang out near the finish line (i.e., our colon), waiting for the other foods that have been grabbing on to heavy metals along the way. It serves as emergency backup, helping ensure that all the heavy metals that made it as far as the colon actually leave the body.

Along with whipping up a daily smoothie, drinking celery juice in the morning is highly beneficial. The mineral salts in the celery juice give extra support to the five heavy metal detox foods by helping to flush metals out of the liver.

Knowing What NOT To Eat Is Half The Battle Too

Eliminate eggs, pork, and any dairy products from your diet – if you want to succeed.

Lower your intake of free-range chicken or grass-fed beef to once or twice a week.

These dietary changes will help with the process of drawing heavy metals out of the body. At the same time, fill your body with an abundance of fruits and vegetables so that as you heal you feel nourished and satisfied and gain their healing benefits also!

Sounds simple but SO many people just continue doing the same things ad nauseam, and expecting a change to happen miraculously!

Medical Myth #1: The belief that your body can attack itself

Have you or a loved one been told you have an autoimmune condition?

Millions of people today are being given a convenient “autoimmune disease” diagnosis or label for their symptoms and conditions. These same people walk away from their doctor, natural health practitioner, mistakenly thinking that their body is attacking itself.  This is fatal.

This misconception around autoimmune disease is so rampant and widespread today that millions of people now believe their body has turned against them, when in reality, nothing could be further from the truth!

Your body never attacks itself!

Remember this.  Your body fights FOR you, not against you.