Dowsing: Exploring the quantum universe through the frontiers of your mind 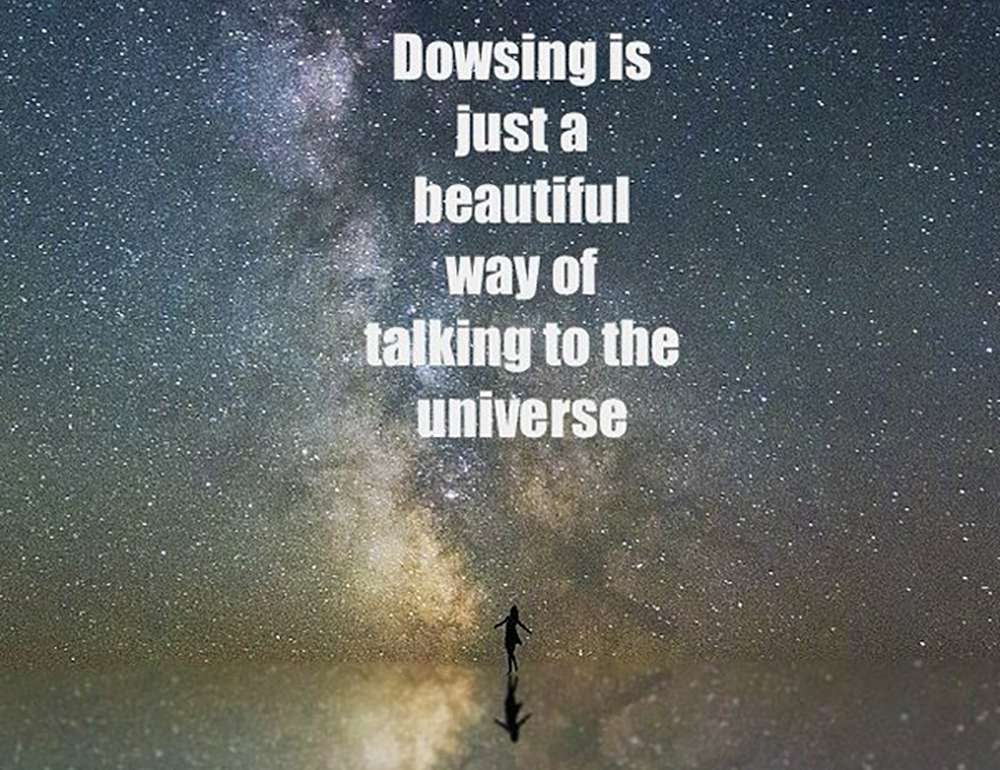 We are all much more than the physical form we perceive in the mirror each day. Inside the body resides the timeless, immortal self. The ancients seers and yogis all spoke of this from ‘knowing’ – direct, first-hand experience.

Today, many of us are disconnected from this knowing this because of society’s over-emphasis on intellect.

How can you begin this process of self-discovery that will change your world view forever as well as bringing a lasting sense of peace and a deep connection with life itself?

One of the fastest ways to get in touch with the essence of your being is through your personal energy field, which is intimately connected to a much larger field of consciousness, often referred to as the quantum field.

Our bodies and minds are already connected to the “super-conscious intelligence” of the Universe, so this fact alone should blow your mind! How is it possible that we are ‘localised” in time and space, yet ‘non-locally’ connected to everything at the same time?

There are many methods to get in touch with this aspect of consciousness but one of my favourites is through the art & science of dowsing.

I find it surprising that the majority of people today are uneducated about dowsing or suspicious of it.. this ranges from the religious person who thinks it is associated with the Devil, and material scientists who want nothing to do with ideas as nebulous as consciousness.

Some may have come across it through the dictionary’s extremely limited definition which appears to be stuck in the 19th century, or even earlier!

The online Oxford Dictionary still defines it as “a technique for searching for underground water, minerals, ley lines, or anything invisible, by observing the motion of a pointer (traditionally a forked stick, now often paired bent wires) or the changes in direction of a pendulum, supposedly in response to unseen influences.”

Not that dowsing isn’t used to find water! It still is, of course! Yet whilst many dowsers, and the art of dowsing itself, has leapt into the 21st Century, many people remain blissfully unaware of its true potential!

“Dowsing has undergone a paradigm shift from the useful but relatively mundane science of finding water sources, lumps of metal and old drains, to the realms of a spiritual search into the mysteries of human consciousness and its relationship with the earth.”
~ Hamish Miller, dowser, author, “The Definitive Wee Book on Dowsing“

Sadly, I’ve found that many so-called reputable internet sources still negate (and even disparage) the hugely positive work of thousands of dowsers around the world.

Skepdic.com is a pathetic excuse for a website, yet appears at the top of Google searches for the keyword ‘dowsing’ and this undoubtedly will put many people off exploring this fascinating field. The write-up is misinformed at best, totally misguided in its reasoning, and appears to be written by those with vested interests in dismissing the validity of the mechanics of dowsing.

Well, that’s a low consciousness for you! It really shouldn’t surprise anyone seeking to elevate their own consciousness and find the ‘truth’ that there will be information like this leaked on the internet.

Many so-called scientific experiments on dowsing have not been open to investigating the phenomenon properly but have set out from the beginning to disprove it! Wikipedia’s current write-up is also misinformed and totally misguided in its understanding of what dowsing actually is. Whilst Wikipedia can be a good source of information, in this case it shockingly misses the mark… and it doesn’t inspire! Not that it’s meant to, of course!

Since dowsing is a subtle art, and highly responsive to the principles of quantum mechanics, so it can be said here that the outcome of any dowsing experiment will be heavily influenced (or, interfered with) by the mere act of observation. This principle is known as the ‘observer effect’ and points to the ‘uncertainty principle’ of quantum mechanics, something that the scientists in the Betz study absolutely failed to take into consideration.

Dowsing works at the quantum level, and must be investigated as such!

To dowse properly and effectively requires you to be in a state of receptivity (‘meditation’) yet in a  heightened state of focused awareness (‘concentration’).

The two most common tools used for dowsing are pendulum or ‘L Rods’. The tool you select will depend on what you are trying to dowse for. My preferred method is to use a pendulum to dowse over charts which contain detailed information about the Soul’s energies, including ‘programs’ that may be limiting expression in the physical body, and even causing illness or suffering.

Luckily, despite those who insist on their rather limited viewpoint that ‘dowsing doesn’t work’, there are many pioneering scientists today who are very open to investigating the phenomenon of dowsing, and many experiments that have since proven dowsing to be highly accurate, and thus highly valuable.

“It may be said with great confidence that dowsing has contributed and continues to contribute to geology, geophysics, ecology, medicine, and the economy of those countries where dowsers conduct their operations.” Professor Alexander Dubrov, Russian Academy of Science

Alongside the research of the Russian Acameny of Science, the simple fact is that thousands of people dowse successfully for health and information, and for correct guidance in determining their own calibrations of ‘truth’. That is, once they have learned to put their conscious minds aside, so they don’t unwittingly scupper their ability to receive clear, accurate information.

Experienced dowsers are generally not put off by negative opinions, or even their own failures, because they have witnessed the positive effect of dowsing in their own lives. If dowsing didn’t work, it would have been discarded a long time ago – and it certainly wouldn’t have experienced the exponential growth it has done in recent times!

Most dowsing happens quietly in the background, out of the media spotlight.

It’s true that people often start by dowsing for the location of water hidden underground, or some other ‘physical’ substance because this idea sits within their comfort level of what is ‘humanly’ possible. However, the true scope of dowsing transcends Newtonian, physical laws of space and time; rather, it is to developments in advanced theoretical physics that we must look for answers.

“All things vibrate, and they vibrate at their own frequencies. When you understand this, you will significantly broaden your understanding of the universe. With this understanding, your eyes will open to things you have never seen before â€“ things previously pushed to the back of your consciousness â€“ and these discoveries and feelings will give new life to your soul.”
~ Dr Masaru Emoto, “The Hidden Messages in Water“

Many students of dowsing start to interact and get answers from the “Quantum Field” immediately. Why? Because they are already connected to it! We are all connected to this wonderful, invisible web of intelligence! This field is also known as the Akashic Records (‘Akash’ from the Sancrit means ‘boundless space’), which is a non-physical database of truly gigantic proportions, containing every human thought, feeling and action, which is unconstrained by time and space. It exists in the eternal NOW.

Accessing ‘the field, or the ‘akashic records’, can be said to be a truly visceral experience that changes the dowser’s perception of ‘reality’ forever. The student can learn to dowse for information which is located (seemingly) thousands of miles away, and immediately ask for changes to be made to their own subtle energy bodies, or the energy bodies for another person (with permission).

This doesn’t mean ‘dowsing’ is foolproof – yet, most times error lies with the dowser in their questioning (and their beginning inability to hold a coherent thought for more than one second), not with the method:

“Poor questioning ability is actually the most common factor behind why those learning to dowse consequently give up. They attribute their confused, unintelligible and seemingly incorrect responses as an inability to dowse and believe they have failed. Not true. If the dowsing tool moves, you can dowse. What needs to be mastered is the skill of the questioning!”

~ Elizabeth Brown, Dowsing: The Ultimate Guide for the 21st Century

Students must learn to consciously focus their minds, and this is no easy task at first. Anyone who has attempted to meditate knows how difficult it is to silence the intellectual ‘chattering’ mind, and to dispense with the constant commentary going on inside. Dowsing is unerringly precise when we are calm enough, and clear enough, to step outside our own thoughts (i.e. belief structures) and enter a true space of open neutrality. This is where dowsing gets really exciting!

Dowsing, using a pendulum, and conscious understanding of your breath, intention, and attention to the field of consciousness, is one extraordinary way that can really help you understand yourself as a vibratory being.

Ask yourself the following:

I assume most people would rightly say ‘yes’ to most of these questions, and dowsing can help with all of these areas, and more!

Dowsing provides you with a wonderful tool to create more of what you want in your life, and less of what you don’t. Be prepared for an eye-opening experience, once you step into the realm of dowsing for health and information! And stay away from the skeptics who have no willingness to explore this field, and also want to stop others from serious enquiry!

Make no mistake, there is a grass-roots movement afoot, with more and more people becoming open to energy work including dowsing!

Anyone can learn to dowse, and you can start exploring this exciting field today! There’s nothing stopping you exploring the frontiers of your Inner Mind, except your own doubts about ‘whether it works’ and ‘whether it’s true’. Yet that is a breathtakingly long journey of self-discovery and self-awareness. In truth, you can dowse all your life and never stop learning!

If you find your current set of friends are not being supportive of your desire to explore this field, then try to find like-minded people to connect with who will support you on your dowsing journey. Be sure to find a good teacher — preferably someone with lots of experience! – who can help guide you past the common pitfalls when beginning to dowse!

Keep your dowsing light-hearted, and most of all, keep it fun!

One response to “Dowsing: Exploring the quantum universe through the frontiers of your mind”