Hawaii’s volcano is raining green gems from the sky

The gems have rained from the sky (Picture Twitter)

Hawaii’s volcano has spewed billions of tons of molten rock for the last 40 days – and now residents have even reported green gems falling from the sky.

“It is literally raining gems,” tweeted Tucson meteorologist Erin Jordan, who posted a photo sent to her by a friend in Hawaii.

Whilst they are not valuable in the material sense some people, like Erin, are seeing it as a blessing from nature in the midst of destruction.

Friends of mine live in Hawaii, right next to the area impacted by the most recent lava flows. In the midst of the destruction nearby & stress of the unknown, they woke up to this – tiny pieces of olivine all over the ground. It is literally raining gems. Nature is truly amazing. pic.twitter.com/inJWxOp66t

The gems are also known as olivine, “a common mineral in basaltic lava, which is what this eruption is producing,” said Concord University volcanologist Janine Krippner. “Olivine is formed in hot and deep magmas and is brought up to the surface during an eruption.”

If verified, this olivine could have fallen out of the lava as it was spewed into the air, U.S. Geological Survey (USGS) scientist Wendy Stovall told Mashable.

It’s certainly not unusual to find olivine crystals in most Hawaiian lava rock, both new and ancient. “It’s pretty common,” Stovall said to Mashable. “There’s often olivine in rocks all over Hawaii.”

Krippner said “there is even a green sand beach in Hawaii from these minerals eroding out of the basalt (lava).” Green sand beaches are rare, the U.S. Geological Survey said.

The crystals are heavier than most sand types on the beach and remain behind when lighter sand grains are washed away by strong wave activity, the U.S. Geological Survey said.

The little crystals discovered near the volcano this week, however, are not being created during the eruption. They’ve been formed deep underground long ago, brewing in the molten rock, Mashable reported.

However, falling from the sky during an eruption is an unusual event: “I have never heard of it raining out as single crystals like this,” Krippner said.

The eruption is now in its 41st day and has already destroyed 600 homes.

The USGS says that three volcanic fissures are still issuing, ‘vigorous eruptions of lava’ and ‘the three closely spaced lava fountains at Fissure Eight are erupting with maximum heights reaching 150 to 180ft.’ 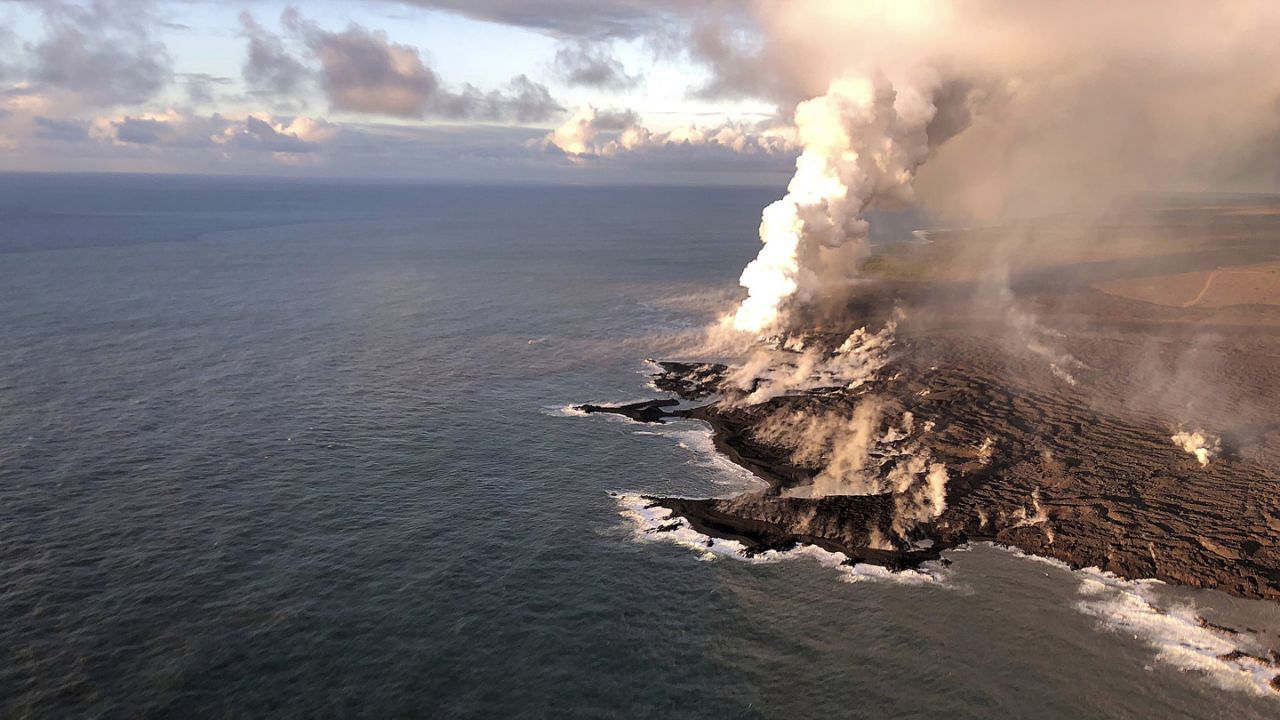 The eruption stands as the most destructive in the USA since at least the violent 1980 eruption of Mount St. Helens in Washington state, according to geologist Scott Rowland, a volcanologist at the University of Hawaii at Manoa.