Living the Four Agreements: Awakening To A Life Changing Journey

In his best selling book The Four Agreements don Miguel Ruiz gives four simple principles to practice in order to create love and happiness in  our lives.

Adopting and committing to these agreements seems simple enough – but, as with all great spiritual truths, living the Four Agreements is challenging.

In the beginning you will lapse countless times because the nature of the ego is to revert to type. Yet, the journey of a thousand miles begins with a simple first step, does it not?

If you begin to practice these agreements, living from your heart, your life will become effortless as a result.

The four agreements are as follows.

Write them down somewhere you will see them regularly – for example, on a post-it on your bathroom mirror, on the home screen of your phone or tablet.

1. Be Impeccable with your Word: Speak with integrity. Say only what you mean. Avoid using the Word to speak against yourself or to gossip about others. Use the power of your Word in the direction of truth and love.

2. Don’t Take Anything Personally
Nothing others do is because of you. What others say and do is a projection of their own reality, their own dream. When you are immune to the opinions and actions of others, you won’t be the victim of needless suffering.

3. Don’t Make Assumptions
Find the courage to ask questions and to express what you really want. Communicate with others as clearly as you can to avoid misunderstandings, sadness and drama. With just this one agreement, you can completely transform your life.

4. Always Do Your Best
Your best is going to change from moment to moment; it will be different when you are healthy as opposed to sick. Under any circumstance, simply do your best, and you will avoid self-judgment, self-abuse, and regret. 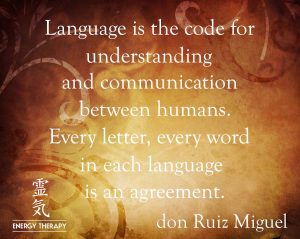 Integrating and Living the practices

People are excited when they realise the immense potential for happiness, love, and respect with themselves and in all their relationships. What they often fail to see is the huge resistance the mind will have to living just ONE of the agreements.

Your everyday mind is your ego, trapped in false beliefs and assumptions about the nature of life.  It is asleep, operating on automatic. Even if you have a PhD, you can still be asleep.  Intellect alone does not bring wisdom – and, in fact, may do just the opposite!

During our early life we began making agreements.

Our parents rewarded us when we did what they wanted and they punished us when we didn’t. We also learned behaviours and habits in school, at church, and from other adults and children around us.

The impact of other people’s opinions and reactions to us became a very strong force in the habits we created for ourselves. In this process we created agreements in our mind of who we should be, what we shouldn’t be, who we were, and who we were not.

Over time we learned to live our life based on the agreements in our own mind.

We learned to live according to the agreements that came from the opinion of others, not our true selves.

We have out of years of habit not paid enough attention to how we express our self.  Instead of living in the light of our spiritual self – which we can call ‘Presence’ – we live by default.

Our minds are filled with beliefs that generate incessant, and often destructive, thinking. In all that thinking we have many assumptions that we are not aware of. We even make the assumption that what we think is true because we are identified with ‘thought’.

As the spiritual teacher Eckhart Tolle points out, we often become our ‘thoughts’ and we fight against anything or anyone that threatens our way of thinking.

Often, the untrained mind will immediately make the false assumption that it should immediately be able to keep the Four Agreements all of the time.

The mind completely ignores that there are already existing deep-seated habits and agreements in place – taking things personally, for example.

Our inner judge tells us that we failed, that we are a ‘failure’, and the voice of the victim (in the mind) accepts this as ‘truth’.

At this point it will seem like things are getting worse instead of better – and it will often seem like attempting to keep the Four Agreements causes us more problems than before – which is exactly what the ego wants!

The ego is well aware that keeping the four agreements will lead to its death, so it will use every trick in the book to maintain the status quo. Without the light of your Spiritual Self to guide it, the ego is a self-perpetuating negative entity.

If you are aware that you are judging your self for taking something personally, your inner judge might use that awareness to judge and reject yourself for ‘judging’ yourself.  It becomes a self-fulfilling prophesy of rejection, guilt and self-punishment.

This is when the fourth agreement, Always Do Your Best, is most important.  It gives you Immunity from self-condemnation.

Your best isn’t perfect practice of these agreements on day one.

Your best will include a lot of stumbling in the beginning… just like walking when you were just a baby, or learning a new language, you won’t and can’t be adept from the get-go.

To expect to do so will create an “energy gap” between your expectation and your reality that you have to deal with.

The escalating problems you will first witness is not because of adopting the Four Agreements.

What is really happening is that you are having an awakening!

You are waking up to the truth of your Being – and you are seeing, perhaps for the first time, how your mind continually operates from  false assumptions, launches into fear-based emotional reactions, and is quick to criticise both self and others.

The process of awakening is downright bumpy, which is why it’s so important to have a spiritual mentor to hand who can ‘see’ and guide you through the forest.  That teacher will be most likely be a modern day ‘shaman’.

With time, you will come to see that it is not the Real you that is judging yourself for failing. It is the inner judge that you gave your power away to!

With consistent practice, a sense of humour, and deep compassion for yourself and others, you will gain more awareness and personal power.

So the agreements may be simple, but don Miguel never says they are easy to keep.

Don Miguel thus refers to people who decide to adopt the Four Agreements and create love and happiness in their life as Spiritual Warriors.

Spiritual is a loaded term today – but keeping the agreements is ‘spiritual’ because it is about living your Life.

You become a warrior because you dare to challenge the old fear based beliefs in your mind.

The quest of a Spiritual Warrior is for Personal Freedom.

Spiritual traditions around the world have their own names for this state of awareness including ‘nirvana’ and also ‘heaven’ – although the latter word has become perverted to mean a ‘physical’ place you go to after you die.

‘Heaven’ or ‘Nirvana’ is simply living your life with unconditional love, gratitude, and respect, for your self, and for others.