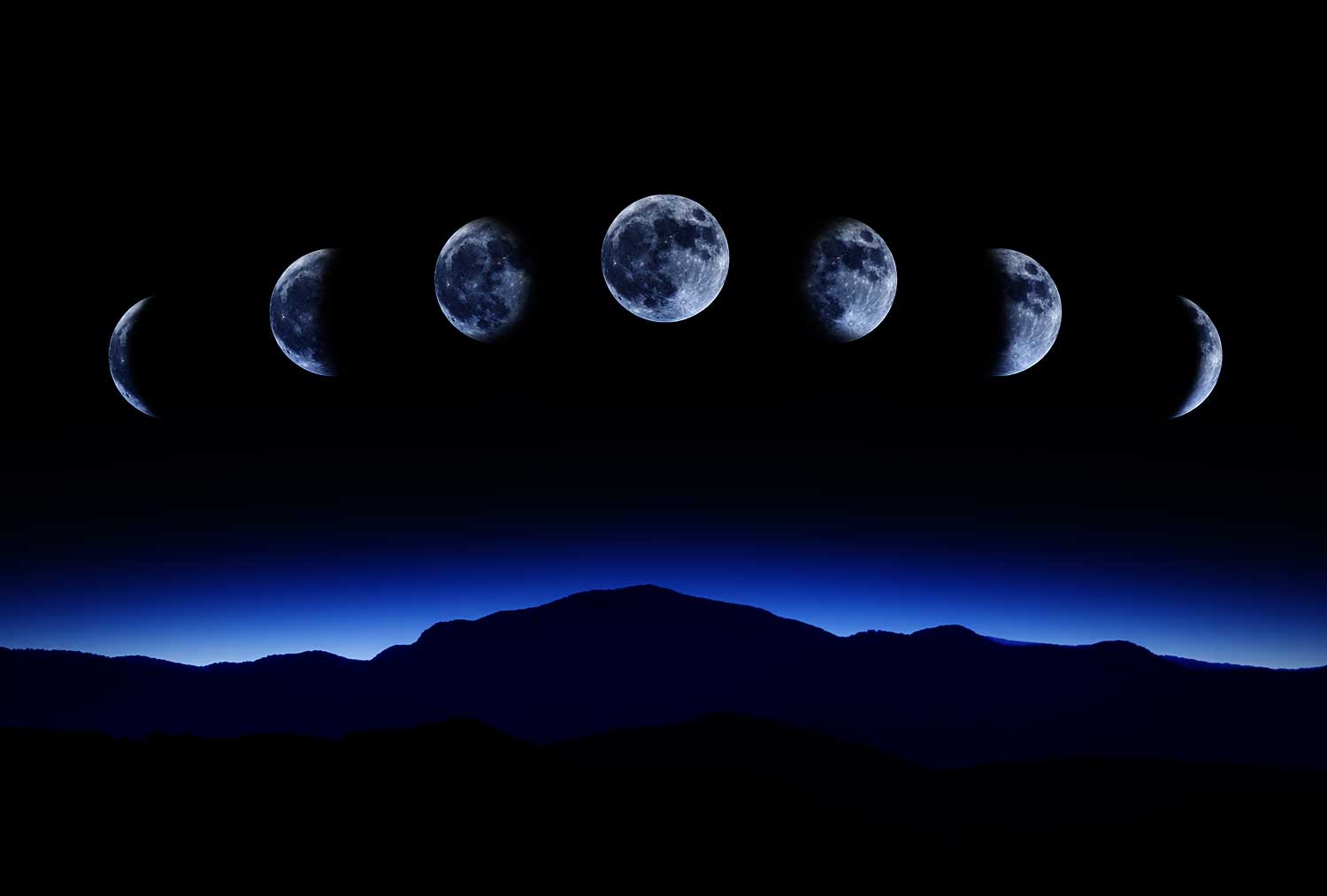 Humans have an ancient and sacred relationship with the moon. Lunar calendars were probably the first method of time keeping developed by our earthly ancestors.

Whether we are conscious of it or not, the moon is directly related to the changing of the seasons and to the way we experience time. The moon affects the tides, way plants grow, as well as human fertility.

Did you know the words month and moon are etymologically related?

The phases of the moon are caused by the relative positions of the earth, sun, and moon. The moon goes around the earth, on average, in 27 days 7 hours 43 minutes. The edge of the shadow (the terminator) is curved, being an oblique view of a circle, giving the moon its familiar crescent shape.

The sun always illuminates the half of the moon facing the sun — except during lunar eclipses, when the moon passes through the earth’s shadow.

When the sun and moon are on opposite sides of the earth, the moon appears “full” to us, a bright, round disk. When the moon is between the earth and the sun, it appears dark, a “new” moon. In between, the moon’s illuminated surface appears.

Depending on your intention, you should aim to work with the cycles of the moon to receive the most effective results in your meditations.

The three major aspects of the moon are the Waxing (or New), Full and Waning.

The Moon is waxing and growing. This marks the phase of the moon when the light is not visible from Earth, because the side of the moon that is being lit by the sun is not facing us.

This is a time to focus on new beginnings and projects: a new career, house move, job, relationship… any new venture in life.

The New Moon occurs in the middle of the monthly Dark Moon period. A Dark Moon describes the Moon during the time that it is invisible against the backdrop of the sun in the sky. The dark moon lasts between 1.5 and 3.5 days depending on the orientation of the earth and the sun.

A half moon looks like half a circle. It is sometimes called a quarter moon as this Moon has completed one quarter of an orbit around the Earth from either the new position (First Quarter) or the full (Last Quarter) and one quarter of the moon’s surface is visible from Earth.

This is a time when the Moon energy at its most powerful. Meditating and/or performing any positive ritual at this time will bring about harmonious results.

This is the ideal time for healing and guidance as you go within and contact your Soul.

The full moon is referred to by a different name, depending on when it appears. For example, the “Harvest moon” is the full moon that appears nearest to the Autumn Equinox. Other names given to the full moon include the following: