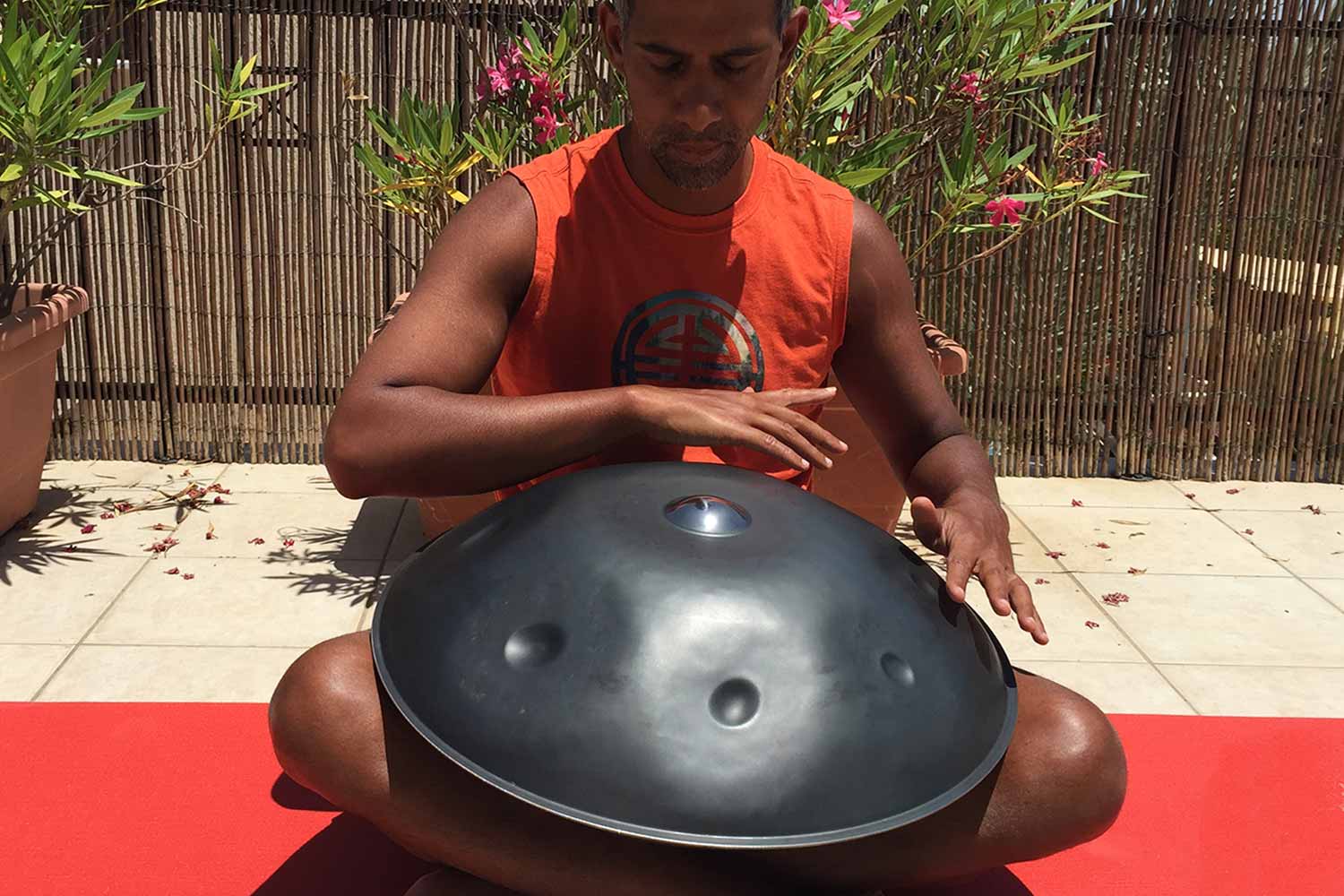 Since its modest beginnings in Switzerland, the Hang (also called ‘Handpan’) has continued to capture the attention of millions, firstly because of the unique, hypnotic sounds and intricate rhythms that a skilled player can produce but also because of the HIGH difficulty in obtaining one! Wait lists are typically in the thousands!

What is a HANG?

The Hang is a sound sculpture which was inspired by the steelpans of Trinidad. On the top of the Hang there is a central gong like tone field called Ding surrounded by the ‘chorus’, a circle of seven tone fields called voices. The bottom side has a round resonant opening, the Gu, that generates a deep bass sound.

The original creators of the Hang, Felix Rohner and Sabina SchÃ¤rer (PANArt), through many decades of research, transformed common steel into a new kind of material which was more suitable for acoustic purposes, naming it ‘Pang’. As they deepened their knowledge of acoustic instruments from the near and far east, the result was a series of interesting instruments whose acoustic qualities – especially the vitality of the sound – made them prick up their ears. This, eventually, led to the development of the Hang, meaning ‘hand’ in their own dialect.

“The gong revealed the purpose of the dome, the tabla refined our acoustic art decisively, the gatham led to the integration of air resonance, and the cymbals and pans introduced us to the world of sounds.”

The label ‘hang drum” has now stuck around the world but it’s not technically correct because to really capture the richness of the Hang’s potential, the artist must play from his or her centre, or hara.

Percussionists were initially attracted to the Hang — many calling it UFO, flying saucer, Pantam, and Hang Drum amongst others — but then came many others who were interested in acquiring one… the source of attraction seemed to be the ‘energetic vibrations’ of the Hang, which enthralled players and listeners with the richness of its overtones.

Sound therapists, psychologists, psychiatrists, shamans and healers were all fascinated and drawn to work with this new instrument as well.

The scales of the earliest Hanghang (plural for “hang”) were bright and higher, and then in 2006 the sound became warmer, more organic and pleasing to the human body.

Felix and Sabina began to listen more intently and expanded their understanding of the nature of the hand on this complex membrane and how it affects body, mind and spirit. Through better understanding of our Pang material, they succeeded to manage the high stresses in it through controlled distribution of these forces.

The reduction of the tonal circle around the central dome resulted in a better balance in this complex system of forces. A more suitable relationship was established between the choir and the dome. The acoustic relationship of both sides of the instrument with the human body became evident when played on a person’s lap.

The Integral Hang was developed in the spring of 2008, which emphasized the fact that individual voices were exciting other voices that were harmonically related:

“The chant of the overtones was like a choir singing in a cathedral, which is how we see the Hang. We were entering a multi-dimensional walk to a vast potential.”

PANArt stopped official production of this unique and inspiring instrument at the end of 2013 to concentrate on their next evolution in sound called the Gubal® [ËˆÉ¡uËbaËl].

Since that time, other makers of the Hang have sprung up around the world… they have had to call their own instruments ‘Handpan’ due to the fact that the name ‘Hang’ is trademarked by PANArt.

The quality of Hanghang/handpan vary enormously, with the best makers having wait-lists of several thousand people… and that means most of them are now closed due to the fact that he Hang is made in very small numbers each year (40-80), with each one tuned precisely by hand and ear.

Since the quality would suffer greatly with mass production, buyers eager to get one should beware of those claiming to be able to turn out such instruments quickly and in bulk, as the quality will surely be far inferior to the sounds produced by authentic Hanghang/Handpans. Buyers should also be cautious when acquiring a second hand one… it is best to buy one in person, so you can check for any damage that might have occurred to the tone fields.

The decision to acquire a beautiful Hang really is an inner journey, so you can’t just go to a music store and buy one!