Buying your first Handpan! What you MUST know! [Videos of Favourite Artists] 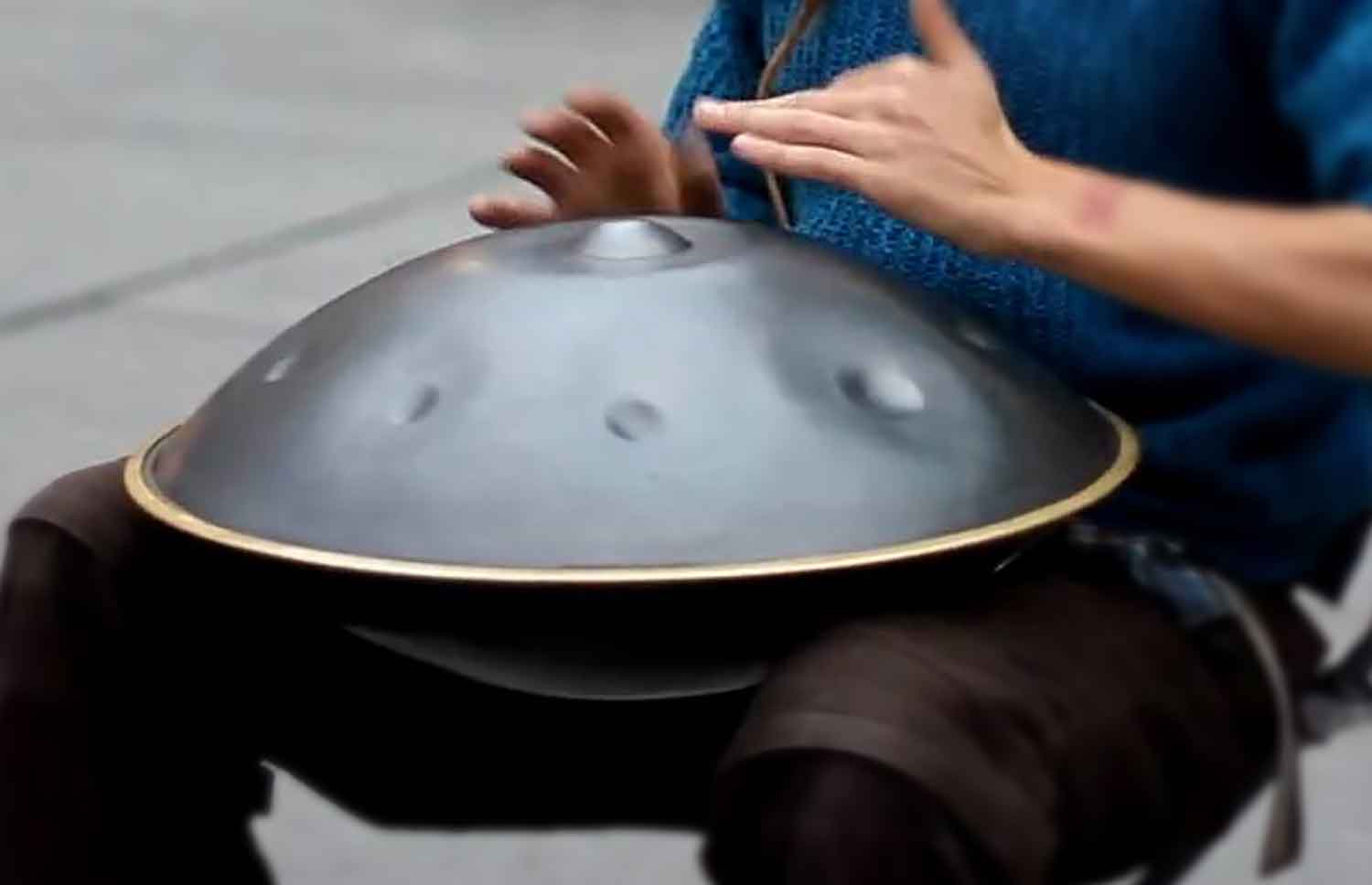 The Hang (Drum), or Handpan has captivated people around the world since its inception in Switzerland in 2000.

The “Hang,” is a percussion instrument that belongs to the family of handpans. Extremely rare and difficult to find, this instrument often retails for insane amounts in the grey market. Created by Felix Rohner and Sabina Schärer, this unique instrument is made from two-half shells of deep drawn nitrided steel sheets glued together at the rim, leaving the inside hollow and giving it the unusual UFO shape – and sometimes referred to as a “UFO Drum”.

The top of the instrument, “Ding” has a centre note hammered into it with (usually) seven or eight “tone fields” hammered around this centre. The bottom is called the “Gu,” and has a rolled hole in the centre along with a tuned note that can be created when the rim is struck.

A modern marvel, the Hang was successful in inspiring makers around the world to create a new family of instruments called “handpans” (called “pantam” in non-English speaking countries).

The Hang, although applying some of the basic principles of the steel pan, is modified in such a way that it acts like a Helmholtz Resonator (the phenomenon of having air resonance in a cavity). A good example of Helmholtz resonance is the sound created when one blows across the top of an empty bottle.

The interior of the Hang in conjunction with the Gu hole creates a Helmholtz resonator. The frequency with which the air in this system oscillates is based on both the air volume inside the Hang and by diameter and length of the neck of Gu, giving the Hang a deep fundamental and a strong harmonic resonance to the whole instrument.

The inventors revealed their motive for producing the “Hang” with its third iteration, called the “Internal Hang”.  Felix and Sabina believe that the Hang is a very personal instrument and is made for someone who doesn’t apply their conditioned knowledge on it, but interacts with it in a more personal way, a way of ‘discovering’ something unique, and forming a bond of creativity that makes the artist and listener feel free.

In 2013, PANArt announced that they would no longer be producing the “Hang” as the makers were engaging in a new instrument called the “Gubal”.

Since 2007/8, quality handpans have been extremely difficult to get hold of – with wait lists in the tens of thousands! Even today, still, they aren’t sold in musical retail stores, and many (if not most) of the best Handpan makers of this world aren’t taking any more orders as their wait lists are full.

A standard price for a good quality handpan from a current maker (i.e. NOT PANArt) will around anywhere from $3000 to $3500.  PANArt Hanghang generally sell for more.

Is a Handpan really  WORTH the high price tag?

Buying a handpan is a bit of journey just because of the above mentioned facts.  Price and rarity!

I advise caution when buying.  Do you trust the buyer?  Have you heard the tonal quality/scale on video?  Are they covering you for any damage when shipping the goods?

That said, there are many different handpans out there now and if you’re not savvy, you could spend a lot of money and get, well, a pile of crap, instead of the glorious sheet metal you really want! Paying a lot of money doesn’t mean the handpan is good. Make no mistake, in any industry there are those unscrupulous characters who want to make a quick buck at your expense!

Several sites I’ve seen pop up recently, for example, recommend Tzevaot which is priced ridiculously high for what it is.  In this case, the high price tag does NOT match the quality. Sadly, many sites have popped up recommending low quality handpans (including Tzevalot) because they are in it for the money… notice the Amazon referral link that earns them money if you ‘click and buy!  These sites appear on the first page on Google.

I personally looked into acquiring one by Tzevalot in late 205/early 2016 and I am glad I listened to my gut and didn’t go ahead. Simultaneously, I was very fortunate enough to acquire a rare PANArt Integral Hang from Felix and Sabina at PANArt.  I had to fly to Switzerland to get it!

Handpans continue to be made by other good makers around the world. My favourites are Echo Sound Sculptures, Ayassa and Saraz.

How to choose your Scale!

The handpan is not like a piano, where each successive note is a half-step above the previous. Indeed, its notes consist of a single scale, a series of notes in steps. And that lots of handpans are tuned differently! Indeed, there are hundreds of scales, and each one has its own unique sound and flavour! And each musician plays differently!

Start by exercising your ear frequently!  Listen to different players and demos online (check out the links and YouTube videos below).

Listen to many different scales on the internet to determine which ones you like the most – the ability to record high quality sound has improved massively.

Make a note of the scales that speak to you, delight you, charm you, carry you – i.e. those with which you “connect”. Record their name and the notes that compose them – this information may not be obvious, so you might need to dig around a bit.  Look in the description of the video, in the title, in a commentary, etc.

Here is one of my favourite Handpan players, Adrian Portia, demoing different scales.

Determine how you would like to feel when playing or listening!

Each scale has its own color and sound. Depending on the scale, you will feel different emotions. Note, however, that the same scale will evoke different emotions depending on how it is played, and who is listening. All this remains very subjective, but here are some examples that I hope will help you:

– You love those which make you travel and disorient you?

Everything is subjective. Depending on how a scale is played, and the emotion of the player at the time, each instrument can evoke a wide variety of feelings.

If you can create the opportunity, visit various manufacturers and ask if you can try their scales: nothing replaces an in-person trial and listening in person, by yourself.  This may require a plane trip!

Select the number of notes you want

There are two ways to count the notes of a handpan. Some include the ding (the central note) and others not.

We can speak either of 8 notes or 7 + 1 (“+ 1” representing the ding).  You need to be clear with the maker/manufacturer during your discussions.

On the other hand, the fewer notes there are, the fewer possibilities there are on the harmonic level. You will be more limited for composition and may may get bored with the scale more quickly.

I advise to choose a handpan with a minimum of 8 circular notes (not counting the ding), and not more than 9.  This is standard tuning for most quality handpans.

Some people now feel that a handpan tuned to 432 Hz is more pleasing to the ear, and Soul.

You may therefore feel alone and frustrated not being able to share musical moments with other players of different instruments – guitar, violin and so forth.

Many people, and perhaps it is true of you, are attracted by the “Eastern” scales such as Hijaz and Romanian. They will feel exotic and other-worldly, and they will certainly accentuate the “zen”, “relaxation”, and “meditation” naturally present in the sound of the handpan. Whilst they can feel more charming and mesmerising, they can also very quickly become limiting and prevent you from exploring variation.

The lowest center note (the ding) commonly found on these scales are:

These scales are simpler to play, and an inexperienced player is more quickly able to create beautiful melodies out of them. which reinforces the intuitive side of the instrument. Being very popular, they will allow you to play with more people. So keep this information in mind when buying!

How to choose your scale?

Well, by using your ears and your tastes, according to who you are, what touches you, and what brings you delight. Avoid the tendency to over-analyse – which will lead to overwhelm and possibly indecision.

Even before watching your first videos, you might already know a little bit about what you like. You know the sounds that resonate with you! By listening to several scales, you will still discover new sensations, new feelings, and new moods.

So, dear friends, I hope this article will help you make your decision.

Do you have another tip to find a good quality Handpan or scale? Write it down in the comments!