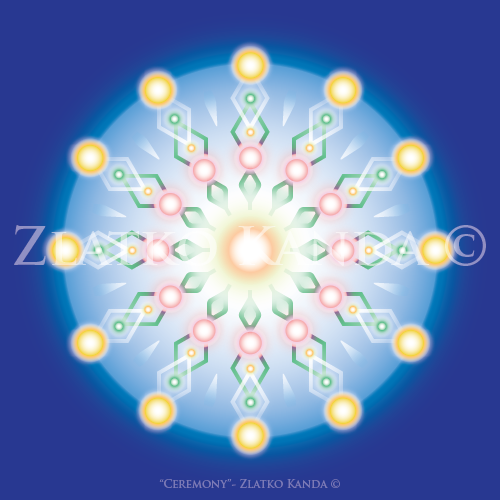 The word mandala comes from the Sanskrit, meaning “circle”, and each mandala that is drawn with intention and awareness of the Cosmic whole contains sacred energies that bring wholeness, harmony and health to all those who interact with it.

A highly conscious person can create mandalas that are extraordinarily effective for meditation, self-empowerment, harmonisation and healing of self, and receiving knowledge, wisdom and insights.

Such a mandala, made with sacred intent, communicates at the cellular level, right down to your DNA.

Yes, the sacred geometries that are ‘encoded’ into the mandala are that powerful!

The mandala is used in many traditions already.

Tibetan mandalas are often highly intricate illustrations of religious significance that are used for meditation and empowerment, as well as blessing the Earth itself.

Tibetan Buddhists use mandalas as a meditation aid:

Mandalas are an intrinsic and universal feature of Tantric deity meditation practices (known as sadhanas). Such meditations are considered extraordinarily powerful methods of overcoming our ‘ordinary’ mistaken perception and distorted world view — the source of our misunderstanding and suffering. By meditating upon oneself as the deities of the mandala, reflecting deeply upon its rich symbolism and engaging in particular internal practices, we can transform our daily perception, lodged in its chaotic, egocentric world-environment, into exalted wisdom and the perfected world of enlightened beings — that is, the blissful world of buddhas. (From Kalachakra for World Peace*)

American Indians also create medicine wheels and sand mandalas. The ancient Aztec and Mayan calendars were both circular and used as timekeeping device and a spiritual expression of power.

Both Navajo Indians and Tibetan monks continue to create sand mandalas to demonstrate the impermanence of life. A Navajo sand painting ritual may last from five to nine days and range from three to fifteen feet or more!

From Buddhist stupas to Muslim mosques and Christian cathedrals, the principle of a structure built around a centre is a common theme in good architecture. Native American teepees look simple but are conical shapes built around a pole that represents the “axis mundi” or world axis.

Buckminster Fuller expanded on the dome design with his famous “geodesic dome” structures. The dome structure has the highest ratio of enclosed area to external surface area, and all structural members contribute equally to the whole–a great structural representation of a mandala!

As above, so below

Representing the universe itself, a mandala is both the microcosm and the macrocosm, and we are all part of its intricate design. The mandala is more than an image seen with our eyes – it can be can be used as a powerful vehicle to explore the inner dimensions of life itself.

As already mentioned, mandalas also have powerful healing capacity, especially for emotional disease. (The word disease should actually be broken into its halves, for it is a disease within oneself that has separated him from the harmony and unity of the Universe and his oneness with it.) The separateness caused by dis-ease is responsible for both physical and mental disorders.

Using the mandala for meditation can conquer those dis-eases.

Psychologists have used mandalas and the colouring of mandalas with patients for years. Carl Jung, in particular, drew his own mandalas for inner peace and had his patients do so was well. In making and coloring mandalas, he discovered that great healing could occur. He even kept detailed records of his research with mandalas which can be studied today.

Zlatko Kanda: the birth of Sacred Mandalas for this ‘New Age’ 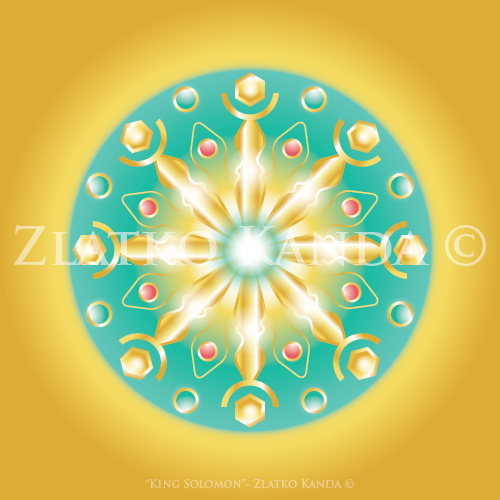 In my travels, I’ve been fortunate enough to come across the Divine consciousness work of one enlightened soul living on this planet who creates exceptionally beautiful mandalas – in digital form. Whilst unconventional, this embracing of our digital world is allowing these creations to spread much more quickly than before.

Born in worn torn Yugoslavia, Zlatko Kanda witnessed many atrocities before fleeing with his family to Holland, where he grew up.  Those lasting impressions and experiences during the war greatly impacted his desire to heal both the earth and humanity, and today he creates very special mandalas that impact consciousness.  His work is created digitally and many people have a very strong calling to learn about them when they see them.

Each mandala is created from a Divine state of consciousness and this spiritual energy is imprinted in the work itself.  Zlatko says that the work comes through him as an open channel for Source.

Most of us have now heard about the incredible work of Dr. Emoto who froze water crystals to show how human thought can effect changes in form – and, since we are made up of water, showed very clearly how our thoughts affects our biology.

Imagine the positive power of thought amplified a thousand times and you have the work of Zlatko in your hands!

How these Sacred mandalas can help you with healing and meditation

If you are going to use a mandala for healing and meditation, then pick one that appeals to you.

What types of harmony and unity does it represent to you? Keep this in mind as you focus on it, on the design elements and the colors, and the wonderful symmetry that symbolizes the great symmetry of the physical universe and of Universal Mind. Take in all the beauty of the design.

Let your mind “float” away from the race world and the creativity of Mind flow through you. Many who do this state that issues and problems with which they have been grappling are solved – the solutions present themselves during the meditation.

By focusing on a circle, with no beginning or end, a meditation can take an individual within and enhance spiritual energy. The intricacies and symmetry of the design remind us that the Universe has many facets but that all of those facets exist in perfect harmony. It is when we get out of harmony with the Universe that the race world of discord and strife enters in. Contemplating the mandala during meditation reminds us that the real world is within us, and it is one of harmony.

2 responses to “Spirit Science: How Mandalas Heal And Transform”