The Reality of War! Read The Dalai Lama’s Hard Hitting Words About The Mass Brainwashing Of Society! 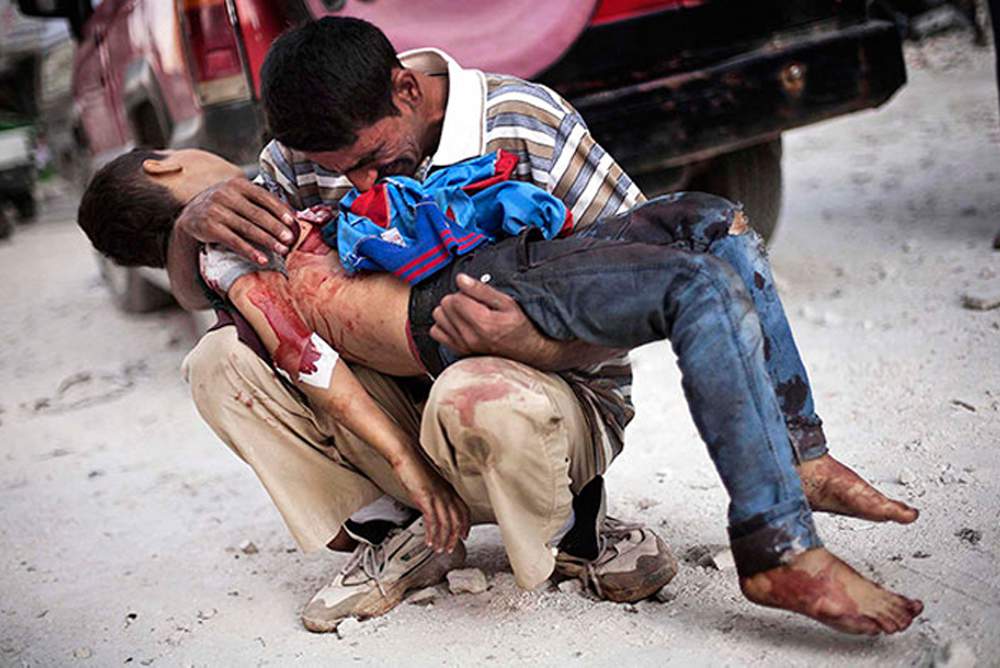 Most recently, the 14th Dalai Lama of Tibet told the world that simply praying is not the answer for the wars and atrocities we are witnessing all over the globe now – and which seem to be increasing at an alarming rate.

His holiness categorically stated that humans have created this problem, and now we are asking “God” to solve it, which makes no sense. If we created this mess, we are the ones who must solve it, not some external force.

These comments resonated with many around the world who are realising that action on a mass scale is required to change the unhappy direction in which our planet seems to be headed!

The reality of war is sadly with us, every day – promoting the agendas of a few self-serving, egotistical few, no matter what the cost to human, plant or animal health… even if the planet itself is destroyed in the process, these so-called ‘leaders’ do not care at all.

Here is what his holiness has to say on the matter:

“Of course, war and the large military establishments are the greatest sources of violence in the world. Whether their purpose is defensive or offensive, these vast powerful organizations exist solely to kill human beings. We should think carefully about the reality of war. Most of us have been conditioned to regard military combat as exciting and glamorous – an opportunity for men to prove their competence and courage. Since armies are legal, we feel that war is acceptable; in general, nobody feels that war is criminal or that accepting it is criminal attitude. In fact, we have been brainwashed. War is neither glamorous nor attractive. It is monstrous. Its very nature is one of tragedy and suffering.

War is like a fire in the human community, one whose fuel is living beings. I find this analogy especially appropriate and useful. Modern warfare waged primarily with different forms of fire, but we are so conditioned to see it as thrilling that we talk about this or that marvelous weapon as a remarkable piece of technology without remembering that, if it is actually used, it will burn living people. War also strongly resembles a fire in the way it spreads. If one area gets weak, the commanding officer sends in reinforcements. This is throwing live people onto a fire. But because we have been brainwashed to think this way, we do not consider the suffering of individual soldiers. No soldier wants to be wounded or die. None of his loved ones wants any harm to come to him. If one soldier is killed, or maimed for life, at least another five or ten people – his relatives and friends – suffer as well. We should all be horrified by the extent of this tragedy, but we are too confused.

Frankly as a child, I too was attracted to the military. Their uniform looked so smart and beautiful. But that is exactly how the seduction begins.  Children starts playing games that will one day lead them in trouble. There are plenty of exciting games to play and costumes to wear other than those based on the killing of human beings. Again, if we as adults were not so fascinated by war, we would clearly see that to allow our children to become habituated to war games is extremely unfortunate. Some former soldiers have told me that when they shot their first person they felt uncomfortable but as they continued to kill it began to feel quite normal. In time, we can get used to anything.

It is not only during times of war that military establishments are destructive. By their very design, they were the single greatest violators of human rights, and it is the soldiers themselves who suffer most consistently from their abuse. After the officer in charge has given beautiful explanations about the importance of the army, its discipline and the need to conquer the enemy, the rights of the great mass of soldiers are most entirely taken away. They are then compelled to forfeit their individual will, and, in the end, to sacrifice their lives. Moreover, once an army has become a powerful force, there is every risk that it will destroy the happiness of its own country.

There are people with destructive intentions in every society, and the temptation to gain command over an organisation capable of fulfilling their desires can become overwhelming. But no matter how malevolent or evil are the many murderous dictators who can currently oppress their nations and cause international problems, it is obvious that they cannot harm others or destroy countless human lives if they don’t have a military organisation accepted and condoned by society. As long as there are powerful armies there will always be danger of dictatorship. If we really believe dictatorship to be a despicable and destructive form of government, then we must recognize that the existence of a powerful military establishment is one of its main causes.

Militarism is also very expensive. Pursuing peace through military strength places a tremendously wasteful burden on society. Governments spend vast sums on increasingly intricate weapons when, in fact, nobody really wants to use them. Not only money but also valuable energy and human intelligence are squandered, while all that increases is fear.

I want to make it clear, however, that although I am deeply opposed to war, I am not advocating appeasement. It is often necessary to take a strong stand to counter unjust aggression. For instance, it is plain to all of us that the Second World War was entirely justified. It “saved civilization” from the tyranny of Nazi Germany, as Winston Churchill so aptly put it. In my view, the Korean War was also just, since it gave South Korea the chance of gradually developing democracy. But we can only judge whether or not a conflict was vindicated on moral grounds with hindsight. For example, we can now see that during the Cold War, the principle of nuclear deterrence had a certain value. Nevertheless, it is very difficult to assess all such matters with any degree of accuracy. War is violence and violence is unpredictable. Therefore, it is better to avoid it if possible, and never to presume that we know beforehand whether the outcome of a particular war will be beneficial or not.

For instance, in the case of the Cold War, through deterrence may have helped promote stability, it did not create genuine peace. The last forty years in Europe have seen merely the absence of war, which has not been real peace but a facsimile founded dear. At best, building arms to maintain peace serves only as a temporary measure. As long as adversaries do not trust each other, any number of factors can upset the balance of power. Lasting peace can assure secured only on the basis of genuine trust.”