Yoga and Activism: Why I Can’t Just “Om it All Away” 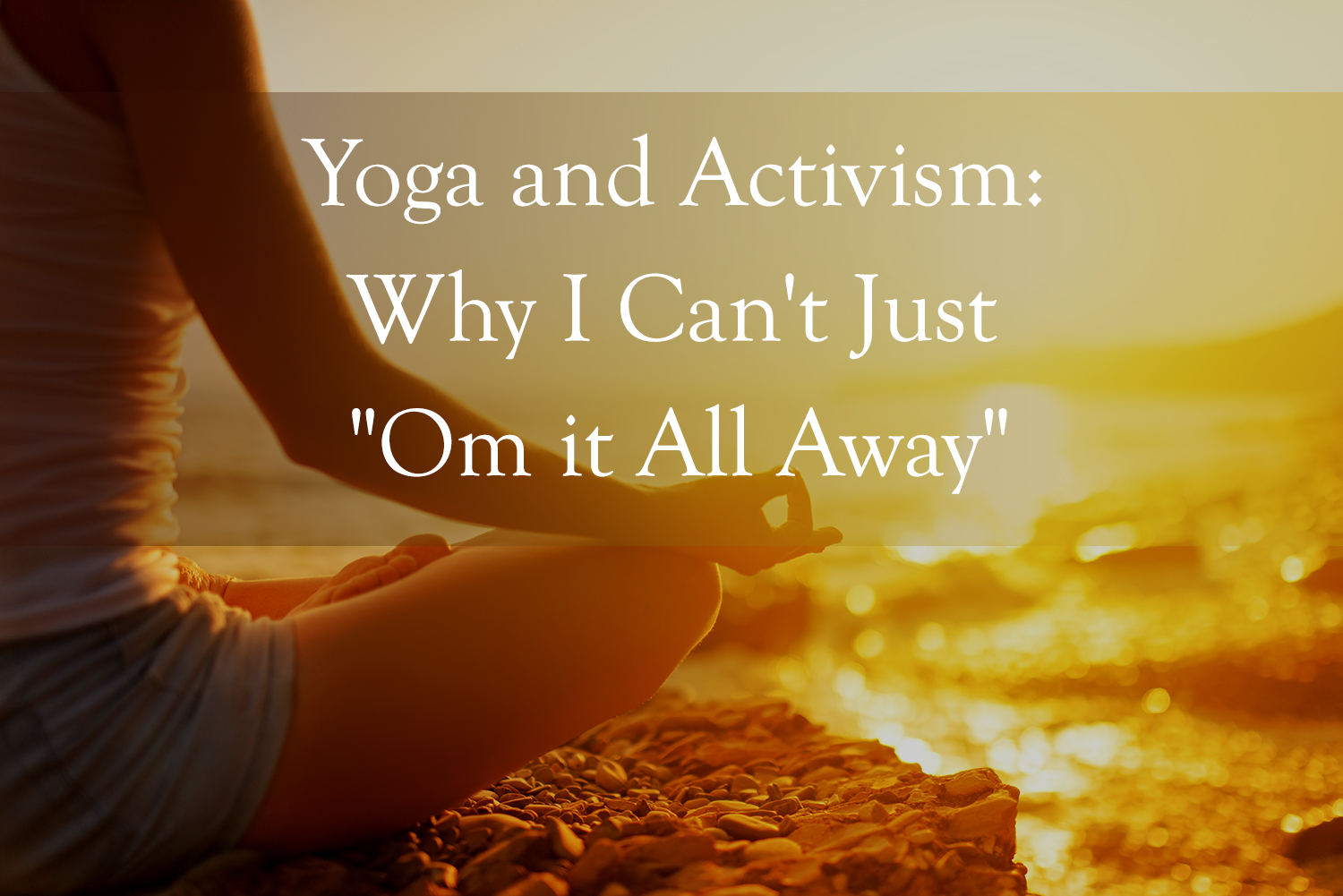 “I’ve been watching you on social media. You are an activist,” a forthright friend commented about my blunt commentary on human, civil, and animal rights. “That’s rare for a yoga teacher. Most seem to think they can “‘Om it all away.'”

Indeed, others in the yoga community often respond similarly to my petitioning and protests: “The world reflects only that which we choose to hear; stay above the noise of the media,” they say. “I take long breaks from outside input to keep my consciousness clear. It might be good for you, too.”

“Take your frustration to the mat! Process it there.”

To those yogis, with their reasonable perspectives and honorable intentions, I say, “Thank you. But that’s not my path.”

“Let’s do something of merit in this lifetime!” said the voice of my soul, intending something more than contemplating my navel.

I might have known there would be another path for me when I retreated to ashram life last year – only to discover that the ashram was now also a retreat center where various groups of differing perspectives and spiritual traditions shared space. I had thought I was ready to snuff out my activist candle and begin kindling my agni (internal or spiritual fire), as Vedic tradition suggests for those past the age of child-rearing, in order to gracefully begin moving toward old age.

But as hard as I blew on the candle, it continued to burn, with my desire to alleviate suffering and to right injustices pouring kerosene on the flame. Spirited conversations about human dignity and justice found their way to the community dinner table.

Retreatants arrived from all parts of the world and all walks of life, with stories that made me cry and want to help. The passion for affecting positive change thrust me again into the world of petitions and protests. I provided financial support for organizations I believed in, and spoke from my heart when opportunities arose.

My rekindled activism seemed spurred on by the words of the wise teachers I’d encountered over the years and by my long-standing meditation practice. “Let’s do something of merit in this lifetime!” said the voice of my soul, intending something more than contemplating my navel.

My teacher, Eknath Easwaran, walked with Gandhi in the salt marches to protest British rule in India. Easwaran fully understood the need to affect change in his lifetime. Studying with him in the 1980s, I watched him encourage the ashram children to work to save elephants from poachers. He created a program to bring deeper meaning in life to seniors, continually interacting with those who promoted peace globally.

Laurel’s Kitchen, inspired by Easwaran, was among the first successful vegetarian cookbooks. As did his role model, Mahatma Gandhi, Easwaran spoke of activism as a lifestyle. He believed that living a kinder, more conscious life would gradually change the world around us, and he saw vegetarianism as an important piece of that low environmental impact, good karma lifestyle.

The ’80s were a rebound from the Vietnam War, with less protest and more introspection. We were dubbed the “Me” generation (akin to what I see in much of today’s “It’s just me and my mat” yoga).

What Easwaran taught gave me hope. I was too young for the radical fury of the ’60s, and hip but quiet Berkeley, California, where I lived, was mellow in the aftermath of its experience with social activism. But Easwaran was awake to the suffering of the planet, and he saw the enormous potential in using the energy generated in meditation to heal the world.

Easwaran’s now classic translation and commentary on the Gita – The End of Sorrow: The Bhagavad Gita for Daily Living, Vol I Chapter 3 – offers this rallying appeal:

A family of two or three or four will not satisfy us; we will want a whole continent for our family, as Gandhiji had. When Mrs. Gandhi was asked how many children she had, her reply was, ‘I have four, but my husband has four hundred million.’ As meditation deepens and self-will becomes less, we come to regard everyone as our own; if they have problems, it is our privilege to live for helping them to solve those problems. When at last we regard the entire world as our family, we will be enabled to draw upon the vast reservoir of love and wisdom lying unsuspected in all of us.

The tradition of karma yoga, the path of selfless service, long predates Mahatma Gandhi and crosses the imaginary barriers between East and West. We can see the flame of social activism in the works of Jesus Christ and in the saints of the Judeo-Christian traditions.

Within my lifetime, Martin Luther King, Jr. opened racial doors, and Mother Teresa of Calcutta modelled the caring and honoring of the poor as a way to level society’s hierarchy. Nobel Peace Prize winner Malala Yousafzai inspires us with her exceptionally brave support of women’s education in Pakistan.

Like Arjuna, hero of the Bhagavad Gita, these are spiritual warriors. Some might feel instead that a life of quiet contemplation is the most “yogic,” but for those who are called to activism, a life sequestered in a monastery will never be satisfactory. The Malalas and the MLKs would not have changed the course of human history through lives of only contemplation.

The inspirational saint Mother Maria Skobtsova wrote these words prior to her death at the Ravensbrück concentration camp:

The way to God lies through love of people. At the Last Judgment, I shall not be asked whether I was successful in my ascetic exercises, nor how many bows and prostrations I made. Instead I shall be asked, Did I feed the hungry, clothe the naked, visit the sick and the prisoners. That is all I shall be asked. About every poor, hungry, and imprisoned person the Savior says, ‘I was hungry and thirsty; I was sick and in prison.’ To think that He puts an equal sign between Himself and anyone in need….I always knew it, but now it has somehow penetrated to my bones. It fills me with awe.

Putting an equal sign between ourselves and others. The deep truth of such karmic service takes one’s breath away!

Gandhi, through non-violent activism, brought centuries of oppressive rulership to an end. He never actually said, however, “Be the change you wish to see in the world.” This was a convenient abbreviation of what he did say, which takes more thoughtfulness: “If we could change ourselves, the tendencies in the world would also change. As a man changes his own nature, so does the attitude of the world change towards him. We need not wait to see what others do.”

It seems to me that Gandhi was saying: Do your asana and pranayama practice, and build your meditation to a steady fire – a fire that brings the kind of clarity that doesn’t ask for approval or require conformity, but sees what this life is meant to be.

For my life, that means service. It means activism. My path is to work for peace where there is violence. Peace comes by sitting together in unity, whether in meditation or in protest, and by volunteering and standing with like-minded organizations to oppose those who would harm others.

Donating money and voting and petitioning for legislative change can also bring peace. Meditation and prayer can, at one and the same time, both fuel and soften the action.

Without meditation, I might burn in the fires of righteous opposition. Tempering that wildfire is what Gandhi’s words bring to mind: “Change your nature” so that your humanitarian words and efforts become clearer, more persuasive, and more effective.

My path is to work for peace where there is violence.

There is injustice, and there is human suffering. The children, the old, the poor, and the mentally ill are dishonored every day.

I could try to justify it with the argument that all is in order and the karmic wheel is rolling. But rationalizing suffering does not make it go away, and I need to do something. I can’t just ‘Om it all away’.

My dharma, my spiritual path, is to sit to still my mind. And then to take a stand.