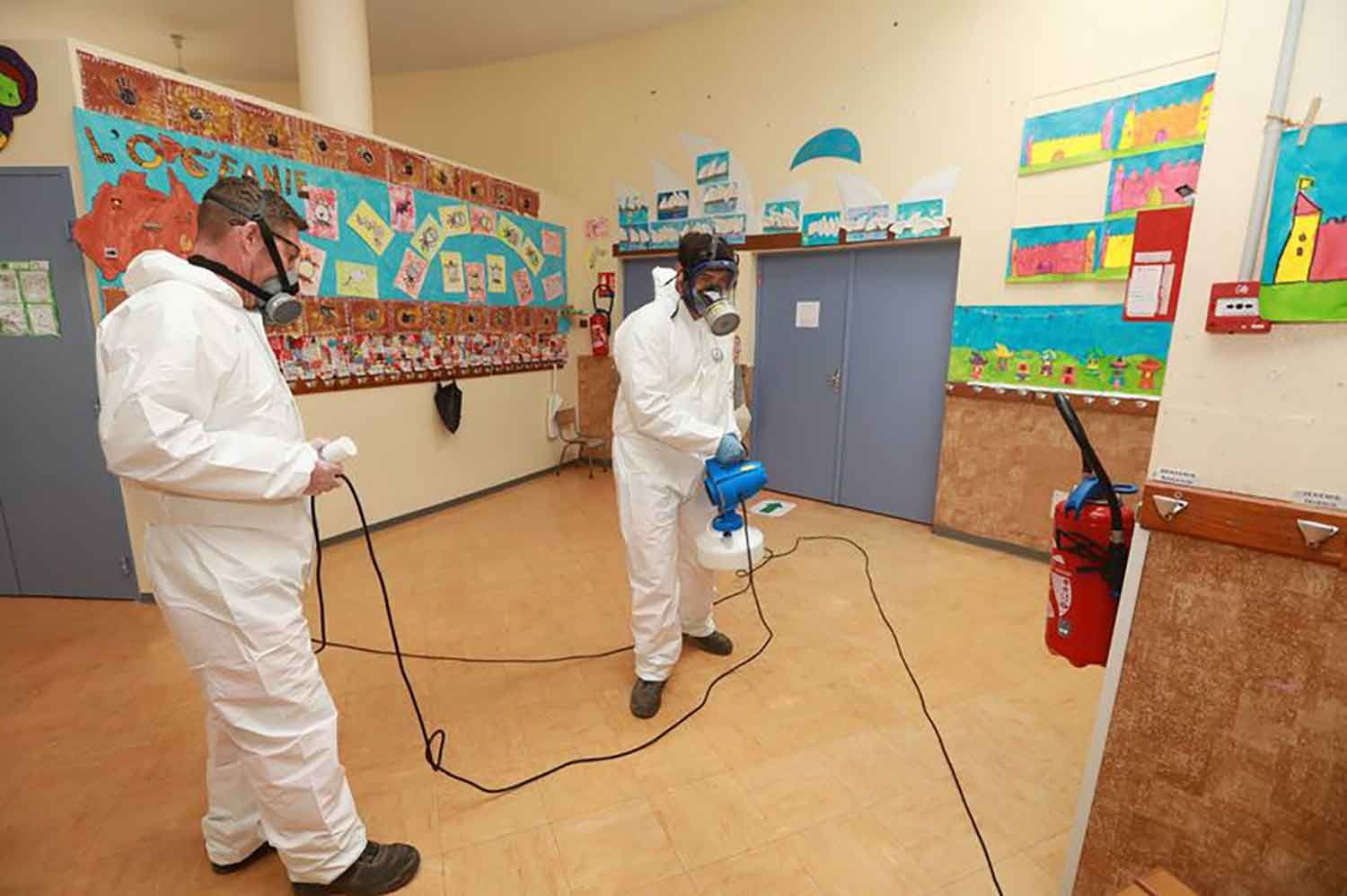 The world has gone over the brink… of insanity.  Even though virtually all children will be unaffected by the virus (still yet to be isolated and proven), and 99% of all healthy adults will be fine, there is now a call to spray pupils with disinfectant at the school gates.

This is coming from deep-rooted fears of how to enforce physical distancing rules among young children.

The answer is, of course, you can’t, especially with younger children — and thank God for that because any draconian enforcement of ‘social distancing’ will cause both short and long term psychological harm.  Yet no one’s talking about that, are they?

In a recent interview, triple board certified Dr. Zach M.D. took the time to explain that humans are made up of trillions of bacteria (microbiome) and viruses (virome) which are critical to creating and sustaining human health, and he advised that we shouldn’t be worried about this strain of virus which has now been shown to be classed in the category of a ‘severe flu’. Herd immunity can win the battle for us.

Let that fact sink in.

The interview presents some mind blowing facts that you might not be aware of, and makes a lot more sense than the sterile line of thinking that will lead to the overuse of disinfectants — which will undoubtedly blow up in our faces as those very measures will create weak immunity in both children and adults, rather than the strong level of immunity that we all need!

Dumping the contagion model – where to from here?

On 13th April, the Surgeon General Jerome Adams explained that the Coronavirus Task Force had effectively dumped the Bill Gates/CDC/WHO predictive contagion model, and was working with the real data.

This narrative was a refreshing change to the out-and-out fear-mongering of Dr. Fauci and Bill Gates, threatening the public that businesses may not re-open for six months to a year, or until and unless governments purchase their conveniently patented, big-pharma vaccination.

Created by the media’s hyperfocus on fear and almost complete lack of critical questioning about the (false) data presented to us, based on faulty computer modelling, and other human errors, we have been largely living in a fear bubble divorced from actual reality.

Dr Mary Bousted, joint general secretary of the NEU, is a case in point — suggesting that the U.K should follow schools in China and South Korea where ‘children stand outside the school gates and are sprayed front and back with disinfectant’. Yet only an insane world would dictate an insane policy like the continuous spraying of children with disinfectant.

Take a look at what this actually looks like!

We’ve seen the rise of superbugs because of the overuse of antibiotics in medicine as well as in our food and water, and the over-sterilisation of our society based on fear will drastically weaken our immune systems over time.  We are not counter-top surfaces that need cleaning!

Sweden hasn’t been in lockdown and they aren’t spraying their children in disinfectant from head to toe, are they?

The data is far from clear on the Coronavirus because of sloppy testing where health authorities were bizarrely using an RNA test that can even test positive when people are stressed, not to mention the fact that a Pawpaw tested ‘positive’!

See this video from Tanzania where the president took matters into his own hands!

Further, COVID deaths have been manipulated because of pressure from the top to report anyone with symptoms as having died from COVID, rather than with COVID.  Co-morbidities have also been unscrupulously ignored, writing the cause of death as COVID when it was actually a heart attack, or COPD for example!

Who’s paying attention to this admission of these failures to do rigorous checks?  It seems not too many given the public willingness to stay silent.

The media is guilty here because it consistently fails to report on these matters, and highlight them — so the same narrative of fear continues with more and more ridiculous, restrictive measures being thought of to ‘combat’ the virus.

Just how far will we go?

Dr. Bousted quickly points to China as the perfect example of how to prevent the spread of diseases, and how to treat children, adding, “In China, children stand outside the school gates and are sprayed front and back with disinfectant, their shoes are sprayed, they wash their hands with sanitiser, they must take off their mask and replace it with a new one, and their temperature is taken remotely.”

Let’s remember that China is a fascist society, run by a fierce and unforgiving dictatorship that does not allow the slightest deviation from top-down draconian ‘rules’.  The people are thus subservient, being watched every second at every day.

The UK is promising to do the same to its citizens as it fast tracks ‘track and trace’ via apps, and then possibly via a ‘health immunity passport’ which will be linked to permission to go back to work.  It’s all very sinister when you realise that the data doesn’t justify this level of response at all!

What is disturbing is that China is constantly being looked to as the model example of how to behave, how to treat and/or prevent illness even when those measures are actually counter-productive!

As a case in point, very recently, two Chinese boys dropped dead within a week of one another while wearing face masks during gym class, according to a recent report. The students, who were both 14, were each running laps for a physical examination test when they suddenly collapsed on the track.

One of the teens was only minutes into his gym class when he fell backward April 24 at Dancheng Caiyuan Middle School in Henan province.

“He was wearing a mask while lapping the running track, then he suddenly fell backwards and hit his head on the ground,” said his father, who was only identified as Li.

The death certificate listed the cause as sudden cardiac arrest, but no autopsy was performed.

The boy’s father said he believes that the mask his son was required to wear to school played a major role in his death.

“I suspect it was because he was wearing a mask,” he said, adding that “it couldn’t have been comfortable wearing a mask while running.”

So, are these draconian, reductionist measures going to be the “new normal”?

Only if we let them dictate to us without questioning what’s really going on!