Sweden’s coronavirus stoicism sets the nation apart from the rest of the world. But are they doing it right, or wrong? 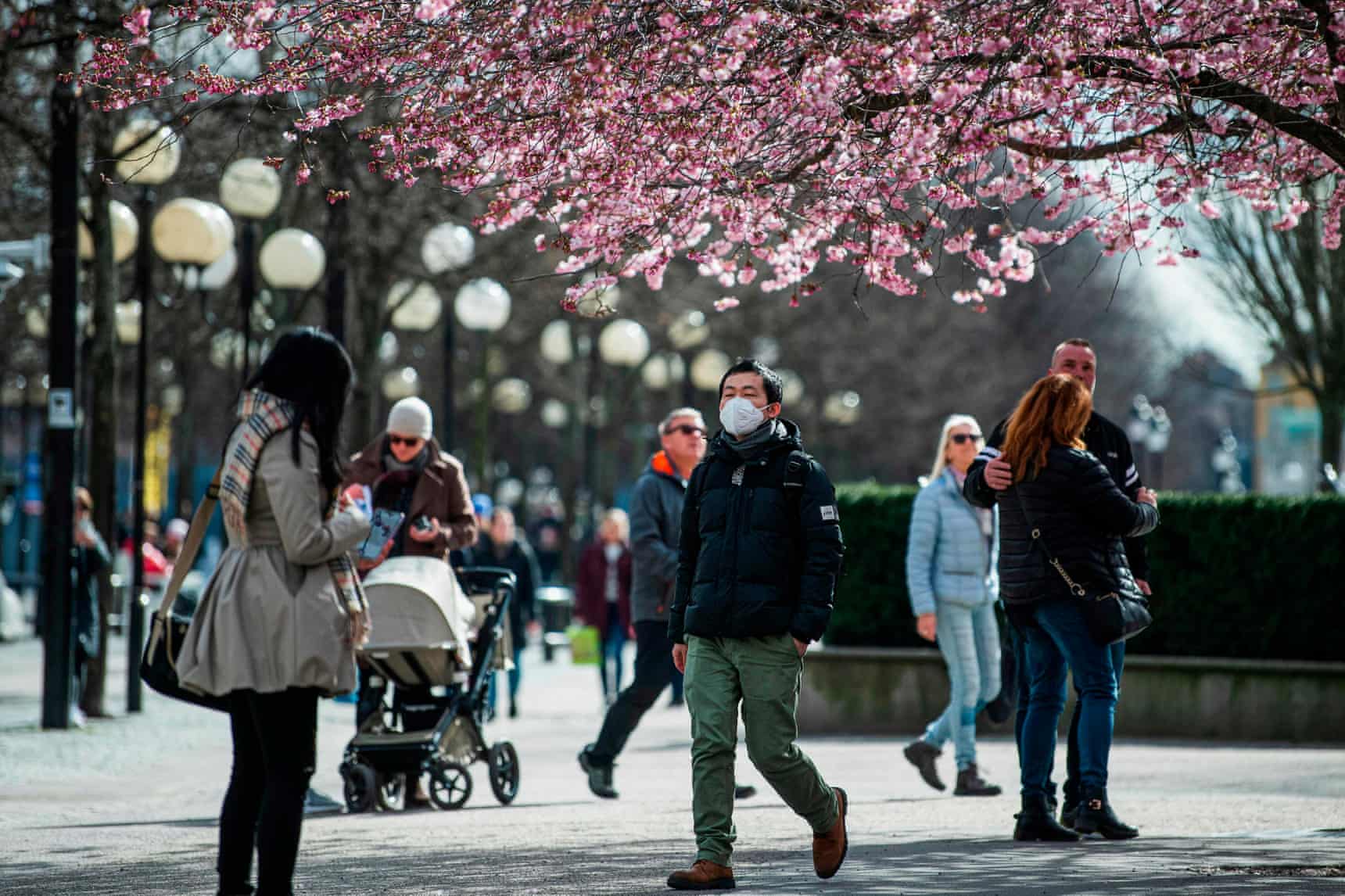 People walk among the cherry blossoms at Kungsträdgården in Stockholm. Sweden has stayed open for business, with a softer approach to curbing the spread of Covid-19 than most of Europe. Photograph: Jonathan Nackstrand/AFP via Getty Images

The global pandemic has closed down Europe’s economies and confined millions of people across the continent to their homes but in Sweden schools, gyms, and (fully stocked) shops remain open, as do the borders. Bars and restaurants continue to serve, and trains and buses are still shuttling people all over the country. You can even go to the cinema.

So, is it surreal in Sweden, or is it surreal for the rest of the world on global lockdown, where nothing is the same as it was a mere few weeks ago?

A friend of mine who lives there confided that she is grateful that she is not having to deal with the nightmare scenario the rest of the world is facing in many countries.

The precautions that Swedes have been advised to adopt – no gatherings of more than 50 people (revised down from 500 last Friday), avoid social contact if over 70 or ill, try to work from home, table service only in bars and restaurants – have allayed public fears that the shocking images from hospitals in Italy and Spain could be repeated there.

The prime minister, Stefan Löfven, has urged Swedes to behave “as adults” and not to spread “panic or rumours”.

However, some of Sweden’s scientific and medical community is starting to panic — a petition signed by more than 2,000 doctors, scientists, and professors last week called on the government to introduce more stringent containment measures.

“We’re not testing enough, we’re not tracking, we’re not isolating enough – we have let the virus loose,” said Prof Cecilia Söderberg-Nauclér, a virus immunology researcher at the Karolinska Institute.

But is this really true?

Stoicism is a way of life in Sweden.. A 300-year history of efficient and transparent public administration, and high levels of trust in experts and governing officials, have left the public feeling safe, rather than desperate and fearful.

“I trust that the doctors working with the government know what they are doing, so I suppose we’re as well prepared as we can be,” Robert Andersson, 50, a vendor manager in IT who lives in Södermalm, Stockholm, said.

“This ‘hysteria’ that the media is launching is far more dangerous than the virus itself.”

Simon Strand, 30, a business consultant in Östermalm, Stockholm, agrees. “There is no reason to believe the authorities are not paying attention,” he said.

Anders Tegnell, Sweden’s chief epidemiologist, who is leading the government’s handling of the crisis, advocates a strategy of mitigation: allow the virus to spread slowly without overwhelming the health system, and without recourse to draconian restrictions. This is what the UK proposed until public pressure caused the government to do a complete U-Turn soon after declaring that nothing would change.

Today, it says volumes for the transparency and accountability that Swedes expect from public figures that Tegnell remains so accessible to the media.

With criticism of Sweden’s response to Covid-19 mounting, he has the slightly exasperated tone of a man tired of repeating the obvious when asked what he thinks of the growing concern and calls for a city-wide quarantine of Stockholm, given the spike in cases there. On Monday, Sweden said it had recorded 3,700 cases and 110 deaths.

“Yes, there has been an increase but it’s not traumatic so far. Of course, we’re going into a phase in the epidemic where we’ll see a lot more cases in the next few weeks, more people in the ICU, but that’s just like any other country – nowhere has been able to slow down the spread considerably.”

This is very true when we step back and look.  The mass panic, fear and draconian measures elsewhere have created a living hell for most people.  So, perhaps this why the rest of the world is feeling uncomfortable with the fact that Sweden is, thus far, absolutely not panicking and life is ideal there in many ways.

“The problem with that approach is you tire the system out,” Tegnell said. “You can’t keep a lockdown going for months – it’s impossible.”

Meanwhile, Prime Minister Boris Johnson has placed the UK on a police-enforced lockdown with drastic new measures: UK citizens can only to leave their homes under a list of “very limited purposes”, banned public gatherings of more than two people and ordered the closure of non-essential shops.

Police chiefs have had to draw up new guidance, however, warning forces not to overreach their lockdown enforcement powers after deep criticism of controversial tactics to stop the spread of coronavirus. On Monday, former supreme court justice Lord Sumption said that excessive measures were in danger of turning Britain into a “police state”.

In Sweden, Söderberg-Nauclér (Center for Molecular Medicine) has said that, “the government thinks they can’t stop it, so they’ve decided to let people die. They don’t want to listen to the scientific data that’s presented to them. They trust the Public Health Agency [Folkhälsomyndigheten] blindly, but the data they have is weak.”

However, Tegnell gives such criticism short shrift: “There is no evidence whatsoever that doing more at this stage would make any difference. It’s far better to introduce stringent measures at very specific intervals, and keep them running for as little time as possible.”

While there is a constant reappraisal of the situation, Tegnell says Sweden has the crisis under control. “We believe we have the most important measures in place already. Of course, we might have to do more things, but we’re not there yet.”

Could this be a sign of enlightened leadership in a crisis?

False positives through testing – is the media guilty of scaremongering?

According to David Crowe, on Green Med, he says:

“The Coronavirus scare that emanated from Wuhan, China in December of 2019 is an epidemic of testing. There is no proof that a virus is being detected by the test and there is absolutely no concern about whether there are a significant number of false positives on the test. What is being published in medical journals is not science, every paper has the goal of enhancing the panic by interpreting the data only in ways that benefit the viral theory, even when the data is confusing or contradictory. In other words, the medical papers are propaganda.

It is also an epidemic by definition. The definition, which assumes perfection from the test, does not have the safety valve that the definition of SARS did, thus the scare can go on until public health officials change the definition or realize that the test is not reliable.”

Further he points out:

“Scientists are detecting novel RNA in multiple patients with influenza or pneumonia -like conditions, and are assuming that the detection of RNA (which is believed to be wrapped in proteins to form an RNA virus, as coronaviruses are believed to be) is equivalent to isolation of the virus. It is not, and one of the groups of scientists was honest enough to admit this:

‘we did not perform tests for detecting infectious virus in blood’

From a mindful living perspective, an important truth that would help everyone keep sane, including our governments, is to deal with things in the moment and not project endless fear-based scenarios into the future. Panic engenders more panic, as Sweden has rightly pointed out.  In the UK and other countries, there has been panic buying and online systems have crashed.

According to Worldometer, there have been over 3,226,000 deaths from communicable diseases so far this year, out of which 120,000 are from the flu alone.

There have been over 2 million deaths from cancer since Jan 1, 2020.

To date, there have been just over 820,000 cases of reported COVID-19 infection, if we accept that there will undoubtedly be false positives in that number. Nearly 175,000 people have recovered, and there have been 40,000 deaths, which is less than 5% thus far — and given that death stats often fail to mention comorbidity rates (describes two or more disorders or illnesses occurring in the same person, that number could be lower.

Tegnell and the Swedish government seem clear on what they are doing, and taking precautionary measures as necessary, without putting the Swedish people into fear and panic, and seem to be avoiding both a recession and depression over there.

In the UK, on 19 March 2020, the 4 Nations Public Health HCID (High Consequence Infectious Disease) group put on the UK government website that COVID-19 is no longe considered to be a HCID in the UK but the UK has only increased its draconian measures. 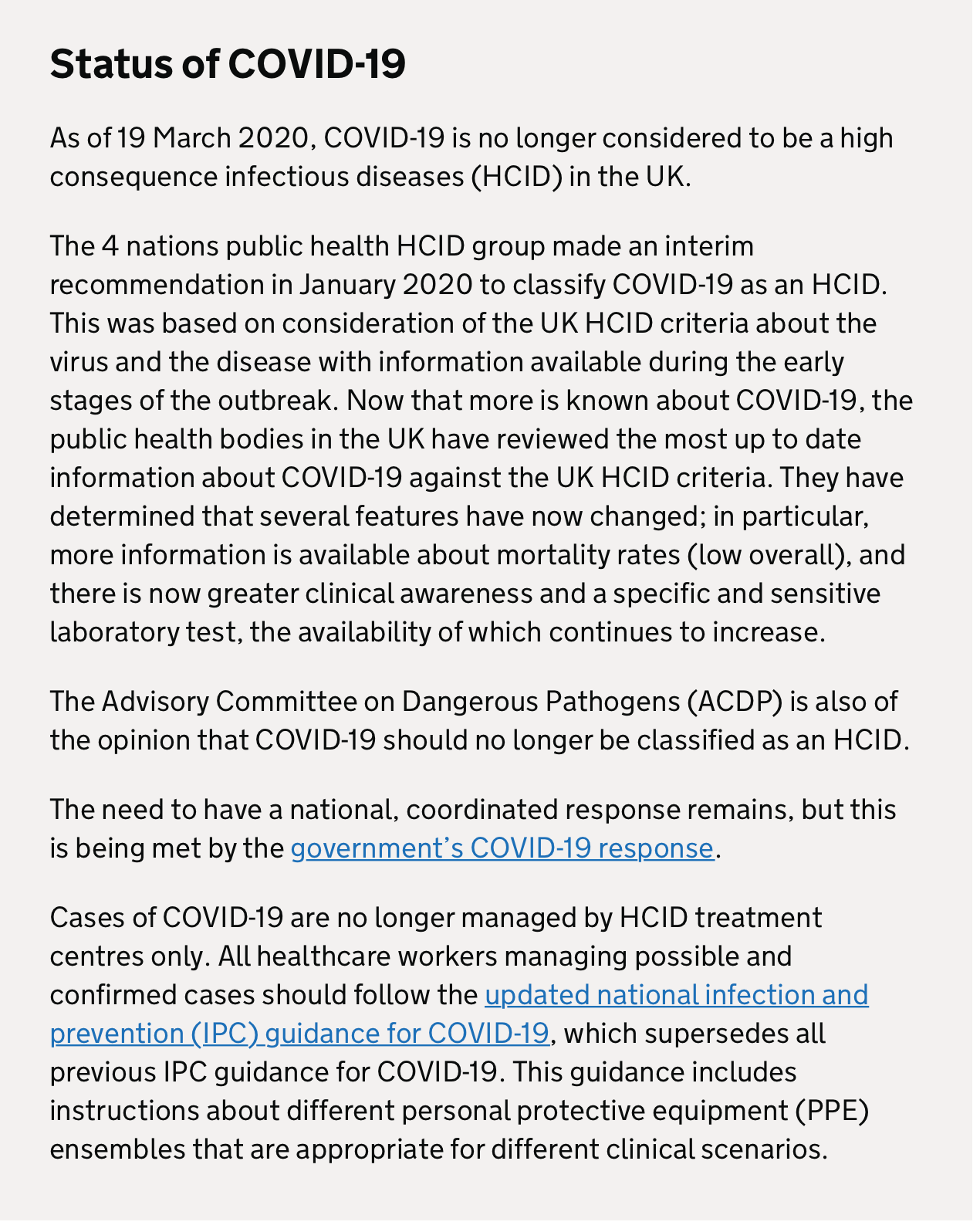 Orla Vigsö, a professor of crisis communications at Gothenburg University, sums up the dilemma. “People (in Sweden) are starting to ask: are others stupid and paranoid? Or is Sweden doing it wrong?”

One response to “Sweden’s coronavirus stoicism sets the nation apart from the rest of the world. But are they doing it right, or wrong?”