COVID-19: Just buy what you need! Stop the panic buying! 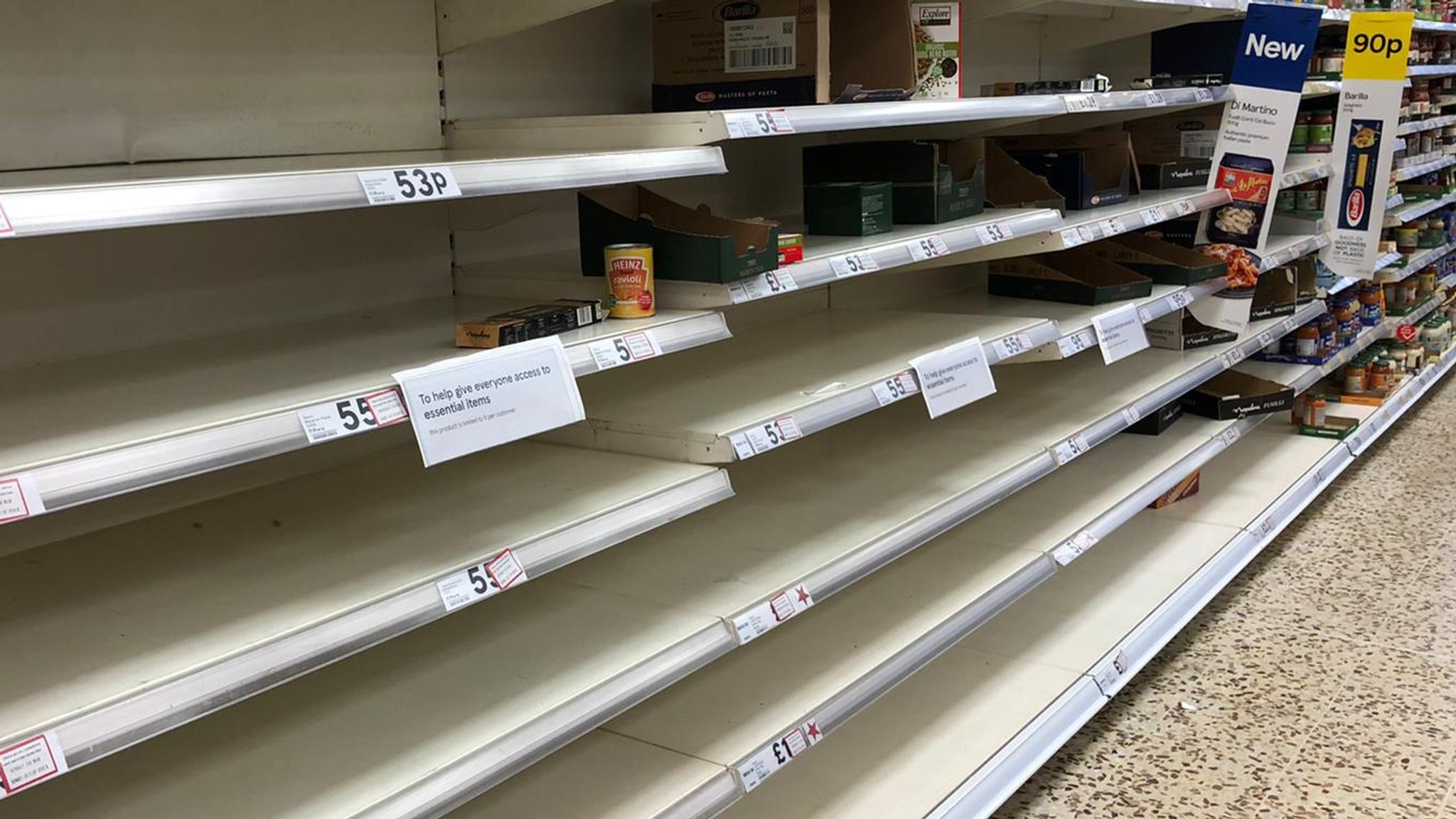 Supermarkets are restricting purchases across a wide range of products as they step up their efforts to combat panic buying. Image source: sky news

In the U.K, empty shelves have been a common sight at major supermarkets in recent days – and the supermarkets have now enforced new rules to stop panic buying — but we can all help by becoming more conscious.

What does this mean? It means to buy normally, as if there were no danger of supplies running out.

Emotional knee-jerk reactions override the ability of the rational mind to function as it normally would, so how can we train our minds to be present (here and now) and not ‘in the future’ and ‘in fear’ of practically everything and everyone?

The first is to breathe – deeply and consciously.  Taking a few deep breaths may not seem like much but it stops the cycle between reactive thought and emotion, which feed each other.
It’s vitally important to stay present and not go into panic. Systems are failing as the widespread fear of the virus is triggering people to do things they would not normally do. If everyone kept moderately sane in these chaotic times, there would be enough for everyone.
Additionally queuing together in large groups to get into supermarkets is the opposite of ‘self-isolating’, something everyone needs to consider.

Ironically, people stockpiling this week in the U.K. has caused a frenzy as more people then rightly panic that they can’t buy what they need for their families. It’s a downward spiral.

In an interconnected world, every action we individually take leads to an effect, but the cumulative effect of millions of people acting in crisis mode has led to precisely this moment in time where there is practically nothing on the shelves, and delivery dates for food items being pushed way into the future.

Mainstream media is largely to blame here, for instigating (and selling!) fear at every opportunity, rather than sensible caution, something I’ve spoken about before time and again on Energy Therapy’s facebook page (check out my video).  Mindful awareness can bring us back to this moment and help us navigate turbulent times.

The UK isn’t the only place, of course – this is not a ‘localised’ phenomenon.  Across the world from Germany to Penang, Malaysia, people have been doing the same thing.

In Germany, a spokesperson for supermarket chain REWE, appealed to people to “spread out shopping over the week.” That way, “employees would also have a chance to replenish shelves quickly enough”.

Sharp spikes in demand out of irrational fears that supplies will run out is a type of mind-based insanity that no system can cope with.

Fear is truly the opposite of what we want – and fear, as we can see, creates more misery for everyone.

Tesco has suspended all-night opening for stores, while the boss of Morrisons has urged shoppers: “Just buy what you need.”

Tesco and Sainsbury’s are telling customers they can only buy three of any grocery item, and ASDA is taking similar action, whilst Morrisons is limiting purchases across 1,250 lines.

Online supermarket Ocado has introduced a virtual queuing system but yesterday, Wednesday evening, the website said it had decided to temporarily close until Saturday so that it could fulfil orders after a “simply staggering amount of traffic”, with more demand than they could meet.

The latest limits, which effectively ration purchases of a huge range of goods, significantly widen the scope of restrictions that had previously been implemented on a small number of items such as hand sanitiser.

Sainsbury’s chief executive Mike Coupe said: “We have enough food coming into the system, but are limiting sales so that it stays on shelves for longer and can be bought by a larger numbers of customers.”

This is great news and something people can focus on here in the UK.

More measures to counteract the chaos of COVID-19

Meat, fish and pizza counters and cafes are being closed from Thursday to free up lorry and warehouse capacity, as well as shelf-stacking time, for essential items to be replenished.

Sainsbury’s has also announced that its stores will only be open to customers over 70 and those with a disability for the first hour of trading on Thursday.

Plans are in place to beef up its “click and collect” offering, and these two groups will be given priority access when new slots become available.

Tesco, Britain’s biggest supermarket, has suspended all-night opening in big stores so that shelves stripped bare by over-anxious shoppers can be re-stocked.

It said vulnerable and elderly customers would be given priority between 9am and 10am on Mondays, Wednesdays and Fridays.

The company’s statement added: “Tesco store colleagues can’t work from home and a good number of them will need to respond to personal or family challenges connected with dealing with COVID-19.

“So we would please ask that you understand the challenging environment in which we are all working. If you do go in-store and want to say thank you, then I’m sure they’d appreciate it.”

Waitrose has drafted in 1,200 staff from sister retailer John Lewis to cope with demand.

The supermarket emailed customers on Wednesday to say that it too was “reluctantly” introducing limits on some of its most in-demand online items.

Morrisons reported that it had seen a “considerable” degree of stockpiling and its chief executive David Potts urged customers to “just buy what you need”.

Business secretary Alok Sharma said he was ‘confident’ supermarkets had the resilience to keep shelves full of stock but this misses the point.  Calm buying is the most important message for today.

We all need to think of young mothers, the elderly and vulnerable in general.  We can widen the circle of compassion to see beyond our own noses.

Mindfulness, or being here now’ (i.e. a state of intense Presence), is a vital inner technology, or practice, for everyone to adopt.  It is no longer something that people can put off — indeed, it will be increasingly necessary as we navigate difficult and turbulent times ahead.