Brazilian protesters rail against Bolsonaro as Amazon fires rage on 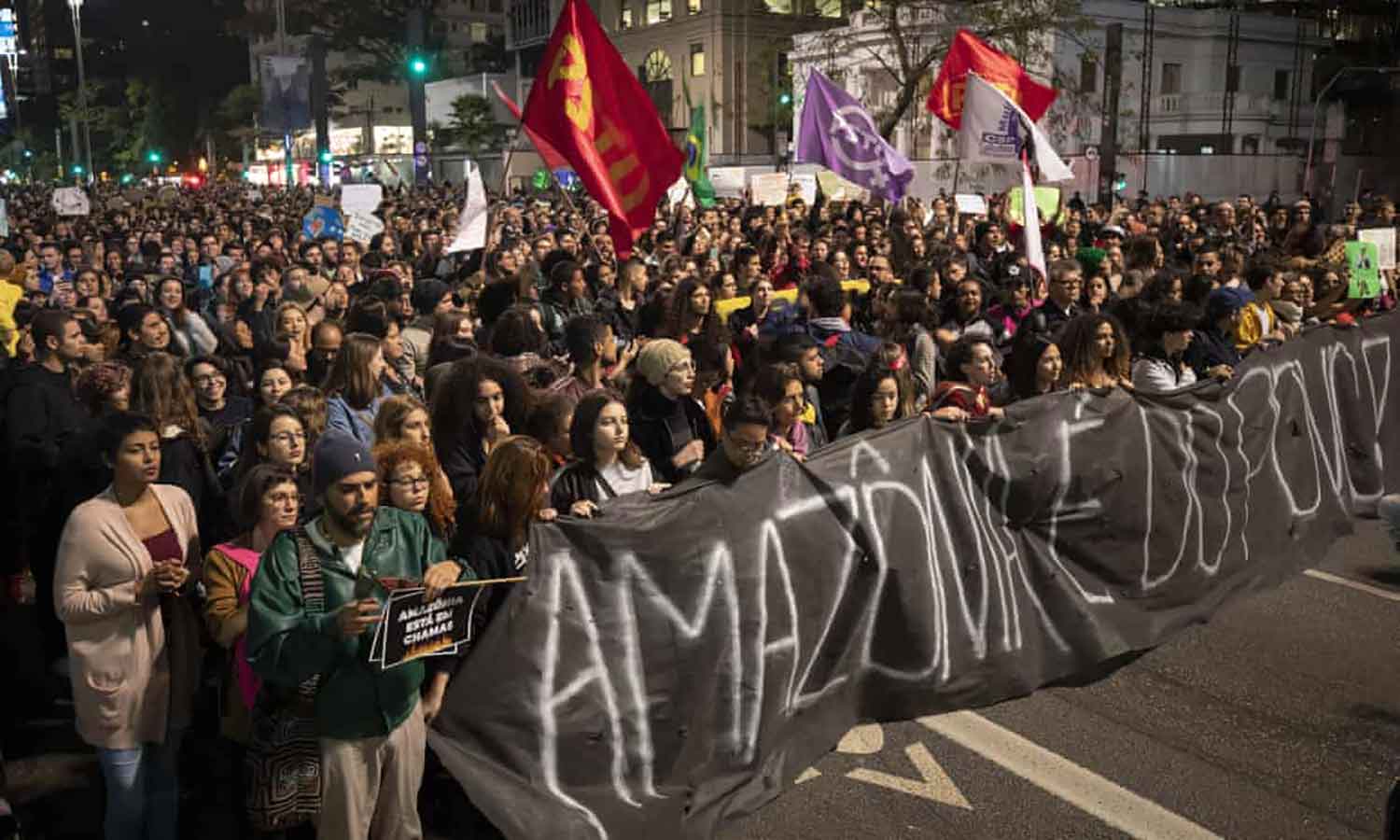 As fires burned across the Amazon and a worsening international and domestic crisis raged around Brazil’s far-right president, Jair Bolsonaro, protesters took to the streets of cities in Brazil and abroad. While the world’s richest countries discuss the crisis at the G7 summit more protests are planned on Sunday.

Brazilians often take part in demonstrations, but rarely over environmental issues. On Friday demonstrators blocked São Paulo’s main Paulista Avenue, calling for the resignation of the environment minister, Ricardo Salles, and railing against Bolsonaro and the powerful agribusiness sector that supports him. One cardboard placard read “boycott Brazilian meat”.

“It is very good that this is happening. We needed something to move people,” said Felipe Campos, who took his seven-year-old godson on the demonstration.

In Rio de Janeiro, a couple of thousand people crowded the steps of the town hall. Many said the fires were a result of Bolsonaro’s plans to develop the Amazon forest and permit mining and commercial agriculture on protected indigenous reserves. The fires happen each dry Amazon winter but soared this year as farmers and loggers, emboldened by Bolsonaro’s anti-environment rhetoric, torched felled trees and cleared land for pasture.

“We need to show how much we disagree with his policy,” said Mariane Rocha, a trainee teacher. Others were angry as well. Bolsonaro immediately blamed NGOs for the fires without providing any evidence. “His whole political game is based on false accusations and mistakes,” said Beatriz Ferreira.

While Bolsonaro spoke on national television to say he was sending the army in to control the fires, a cacophony of pan-bashing rang out in the main cities, just as it had done for his predecessors Dilma Rousseff, impeached in 2016, and Michel Temer, twice arrested this year in a graft investigation.

“I have profound love and respect for the Amazon,” Bolsonaro said. He argued that more than 20 million people who lived in the Amazon wanted “economic dynamism proportional to the riches there”, ignoring the factories in a free-trade zone in jungle city Manaus, the world’s biggest iron ore mine in Pará state, and the cattle and soy farms eating into the rainforest’s Southern borders.

After talking to Donald Trump on Friday, Bolsonaro said some countries would press Brazil’s case at the G7 in the face of criticism from France, and sought to assure Brazilians that the situation was under control. “Even though the fires this year are not outside the average for the last 15 years, we are not satisfied with what we are seeing,” he said.

Scientists have accused Bolsonaro of playing a numbers game. In 2004 and 2005, fires raged out of control before tough environmental policies began bringing deforestation and fires under control. Deforestation began rising again in 2013, under Rousseff.

According to official data from Brazil’s space research institute, INPE, there have already been 25,000 fires in August in the Amazon biome – the most since 2010, when it was hit by a drought.

“It’s just plain manipulation,” said Alexandre Costa, a professor of physics and climate science specialist at the State University of Ceará. “They are trying to make things look normal when pretty much they are not.”

August fires in the Amazon state of Rondônia – where Bolsonaro won 72% of the vote – have caused some flights to be cancelled and hospital admissions for respiratory problems have tripled in the state.

“The fires affect everyone, principally us in the indigenous reserves, because there is a lot of smoke, you can’t see properly, our vision burns,” said Maria Leonice Tupari, an indigenous leader.

José Carvalho, a former environment minister, blamed Bolsonaro’s policies for aggravating a recurrent problem and said Brazil should not shoulder the cost of protecting the Amazon alone. “The world should pay for the environmental services that the Amazon provides to the planet,” he said