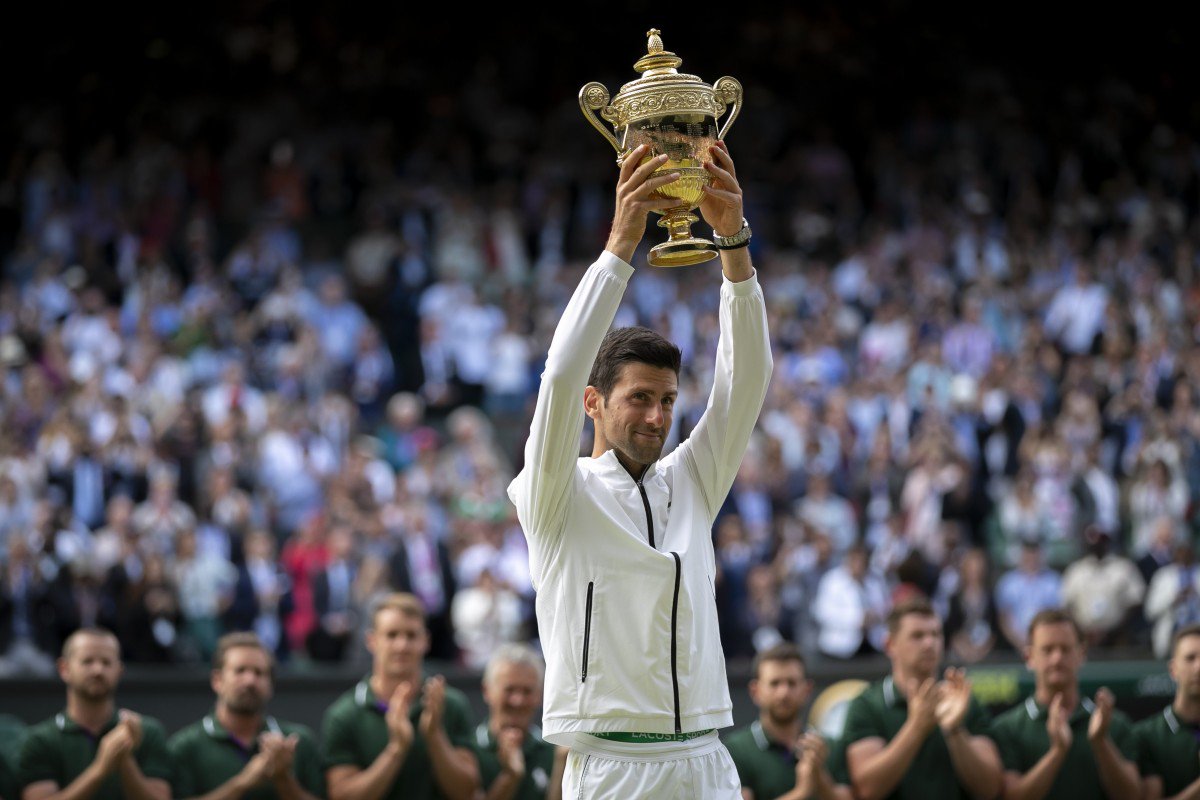 Novak Djokovic of Serbia holds the trophy after winning the men’s singles final against Roger Federer of Switzerland at Wimbledon. Photo: Xinhua

Even among elite athletes, Novak Djokovic is well-known for his devotion to eating clean – indeed, his meteoric rise to number one coincided with him going gluten-free as well as following a plant-based diet. He doesn’t like being called a ‘vegan’ but, regardless of labels, his recent win over Federer at Wimbledon again shows just how much his core lifestyle changes have helped him stay top of his game.

Almost a decade ago, Djokovic discovered he has a gluten allergy by pressing a piece of bread against his stomach with his arm, on the advice of a nutritionist, and observing the immediate loss of strength in that arm. He later learned he has an intolerance to dairy and is highly sensitive to refined sugars.

This shocked Djokovic, whose family owns a pizza restaurant, and who claims he ate so much bread growing up, that he would even have a side of bread with his pizza.

Djokovic not only decided to change his diet based on his food allergies, but also because of his low-energy performances. During tennis tournaments, he felt exhausted and would suffer from breathing problems, vomiting, blurred vision, and an inability to handle heat.

After changing his eating habits, he says he has better recovery and improved overall health. His plant-based diet extends beyond the tennis court. He opened a vegan restaurant with his wife in Monte Carlo and was an executive producer of the recent documentary, The Game Changers, which examines the connection between plant-based eating and sports.

A big feature of his healthy diet is that Djokovic himself cooks as much as possible, even when staying in hotels – he’ll insist he stay somewhere with a kitchen. He also likes to buy organic produce and avoids processed foods and refined sugars completely.

Djokovic might opt for a smoothie in the morning, too. He has tweeted about his favourite smoothie recipe consisting of banana, plant milk, cinnamon, chia seeds, protein powder, flax seed and cacao powder.

For his main meals, Djokovic will eat nutrient-dense carbohydrates such as brown rice or quinoa, paired with veggies such as roasted peppers, broccoli, cauliflower, carrots and green beans. He’ll often go for a gluten-free pasta with veggies to energise himself and also eats plenty of beans and lentils.

Djokovic is also a fan of soups and salads, such as carrot ginger soup and kale salad, and can be seen drinking various green juices on social media. Fruits are also consumed, but not to the extreme, as he doesn’t want to go “overboard” with the sugars.

“My gluten intolerance was discovered in 2010. Before that, I didn’t even know what gluten was. I also removed the dairy products and refined sugar from my diet as well, which is maybe even more important than gluten. I think that’s helped me not only to be a better tennis player throughout my career in the last seven years, but also a healthier person, an athlete that recovers faster. It worked for me. Obviously I’m not saying this is the way to go for everyone, but it’s something that has been a very important, integral part of my career, of my life.”

And here’s what else we can learn from one of the mentally and physically fittest, and most successful, players on the ATP tour!

“I do [meditation and yoga] out of a need to have an optimal state of mind and peace and calm, and at the same time happiness and joy. Everybody has their ways to reach that state of consciousness where you’re in a good mood and you feel love towards yourself, towards people around you, towards the planet. So I try to be aligned with this kind of approach and mindset in life […] Because it was definitely not an easy period for me in the last seven to eight months. The results were not there in the big tournaments. But more than results, it was that lack of balance on the court emotionally.”

Novak Djokovic also reflected on the concept of visualisation.

Following his win over Roberto Bautista Agut, the Serb said: “It is part of my pre-match routine. I also do it on the court. I think we all do it to some extent, whether it’s conscious or unconscious.

I think it’s normal that when you care about something, you want to prepare yourself the best possible. Especially on the changeovers, you visualize and imagine what the next point or next game will be like. It is a quite challenging battle within yourself.

I think at this stage we play in one of the most important stadiums and tournaments in the world, playing semifinals, finals, fighting for the trophy with one of the biggest rivals. I think the most important and probably the first win that you have to make is the one within yourself, then whatever happens externally is, I guess, a consequence or manifestation of that.

The visualization is part of the mental preparation. It’s very, very important to me. I do it all the time. If I have a part that I do for myself regardless of the opponent because I want to rely on my strengths. I want them to be highlighted.

I want them to surface right away when I step on the court. Then, of course, there is a part which is related to the opponent, depending on what I want to do.”

“I work very hard every single day to not have any fears. I think that fears are the biggest enemy of all of us in every aspect of our beings, whatever we do. If I paid too much attention to my fears, I wouldn’t be able to achieve what I have.”

Let the Love In

“I try to focus on the positive emotions that drive me, like passion, joy and the pure inspiration to play the sport that I love. I have to always go back to that core: the fact that I enjoy just holding a racket and playing on a daily basis on any regular court, not just the centre court of Grand Slams, brings me that excitement and that joy that pushes me to keep on going […] So I’ve had to rediscover this inner joy of motivation, of playing. And not only to win or lose, but playing for the sake of enjoying the game.

Enter a New Dimension of Consciousness

“I was blessed to become a father almost three years ago, and my wife is pregnant again […] Personally, my life as a tennis player has changed since then. Not in a way of not having enough motivation or playing enough tournaments, but entering a new dimension of consciousness and being aware of myself as more than just a tennis player. Now, when I come home I have to leave the racket on the side and commit to the family duties, which I enjoy very much. And I think that brings me that sense of calmness and great recovery as well.”