This 13-year-old opened a bakery. For every cupcake he sells, he gives one to the homeless. 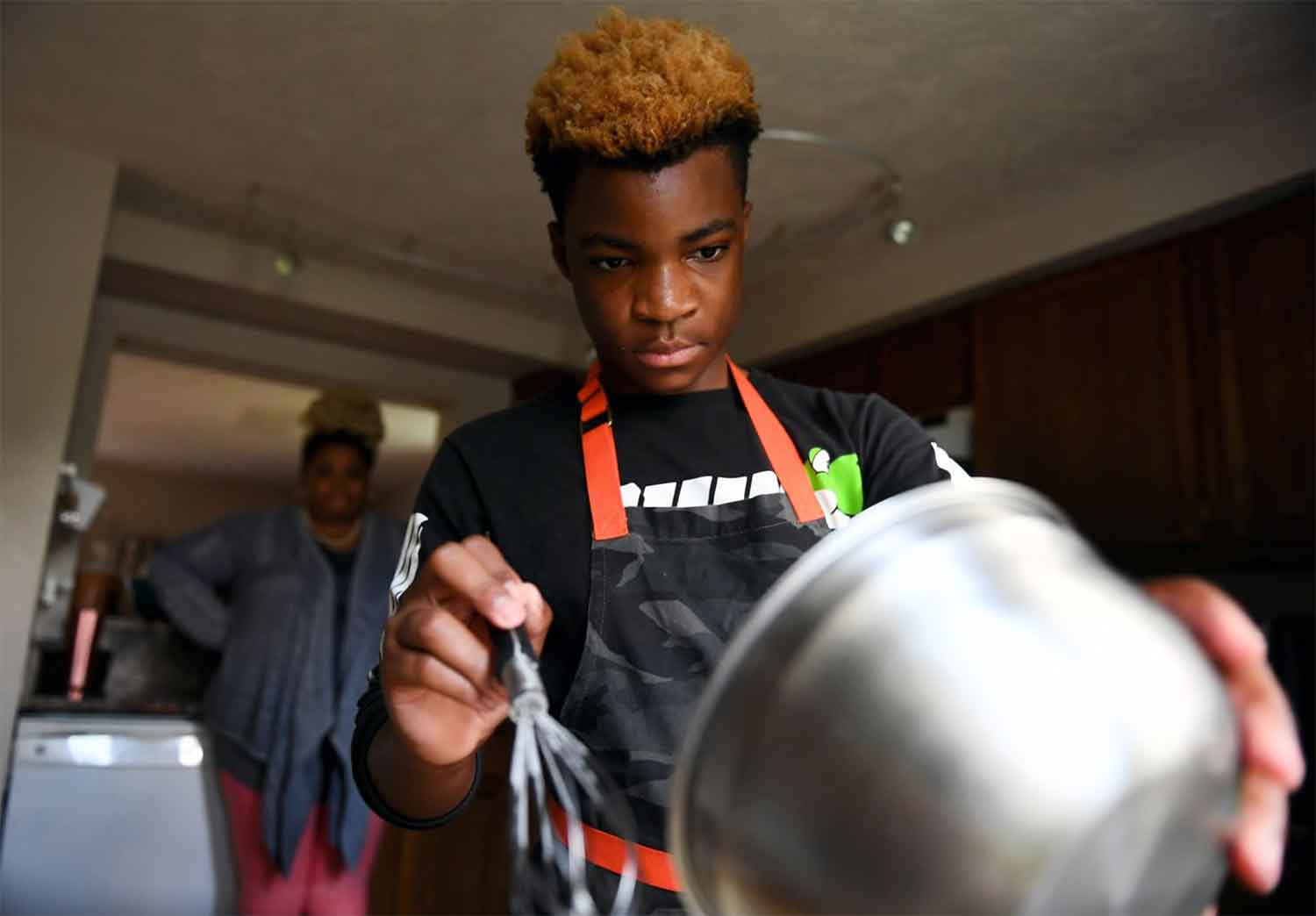 Michael Platt makes a lemon cake at his home in Bowie, Md., while his mother, Danita Platt, watches. The 13-year-old started Michaels Desserts and gives away one cupcake to the homeless for every one he sells. (Katherine Frey/The Washington Post)

He lingered by the “I Have a Dream” poster in his grandparents’ house, imagining ways he too could fight for justice. He memorized statistics about income inequality and childhood hunger. But he also spent afternoons at his computer in his Bowie, Md., home, awestruck by YouTube bakers who transformed a base of eggs, flour and water into edible works of art.

When his parents gave him a pair of Toms shoes for Christmas three years ago, Michael saw a way to connect his twin passions. At age 11, he founded a bakery that operates on the Toms one-for-one model: For every cupcake, cake or cookie that Michael sells, he donates another to the homeless and hungry. Twice a month, he heads to locations including domestic violence shelters, transitional housing and McPherson Square in the District to pass out goodies.

“I know I like cupcakes, but also cupcakes are part of a child’s childhood so they should get them,” said Michael, noting that he always eats one with whipped icing on his birthday.

Michael calls his baking business Michaels Desserts. He left out the apostrophe as a reminder that he is baking for others, not himself.

“I always wanted to have a purpose for what I do,” he said. “It’s all about helping people — not just having a purpose for yourself, but thinking about, ‘How does this touch other things?’ 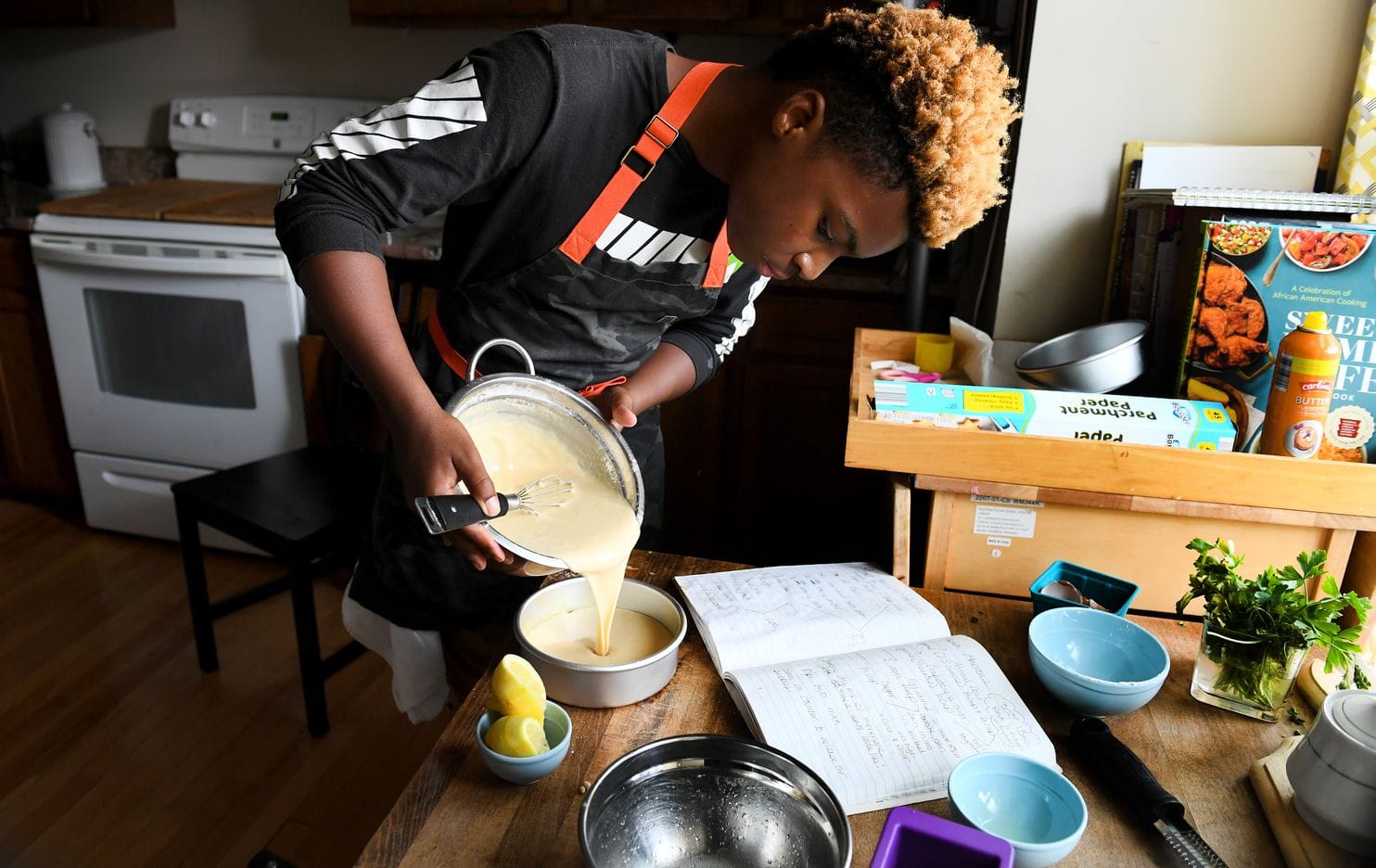 When Michael founded the business two years ago, his parents chipped in to purchase supplies and get things going. Now the home-based bakery funds itself, his mother, Danita Platt, said.

Most customers place their orders via Facebook. (Michael recently set up a website for the business.) He sells roughly 75 cupcakes a month, four for $15, along with a dozen cookies and a dozen “chef’s choice” items — which, of course, means he must also make more than 100 treats to give away.

Most often, Michael fills orders placed by local strangers — people who live in the area and who heard about his business through social media or by word of mouth — though he did once ship a crate to Tennessee.

Michael bakes both for individuals and for events such as anniversaries and weddings, his mother said. The most common request is that he produce cakes or cupcakes for nearby birthdays.

He can keep up with his baking in part because he is home-schooled by his mother, who quit her job as a parent adviser for the Prince George’s County school system to take care of Michael full time. This setup was not his family’s first choice. Michael withdrew from public school — and his mother from her job — after he was diagnosed with epilepsy in sixth grade. His seizures became too severe and too frequent to allow him to sit in a classroom, his mother said.

“It was a very, very difficult time,” she said of the period after the diagnosis, during which Michael had to restrict his physical activity. “He had to stop everything he loved: gymnastics, climbing trees, diving.

“So that’s when he kind of threw himself into baking,” she added.

But when he started the bakery, he knew from the beginning that he wanted his business to do more than make money. That’s why the bedrock of Michaels Desserts is its mission of fighting hunger and giving back, which Michael accomplishes through his giveaways and the very design of the treats. He offers customers three kinds of goodies each month: They can choose between shortbread cookies, a staple; a “chef’s choice” item that Michael invents anew every four weeks; and that month’s edition of what Michael calls his “freedom fighter cupcakes.”

“So I choose a person to base a cupcake off for each month,” Michael said. “And each month I have a flavor that represents them — and I’ll tell their story on my Instagram page.”

This month’s freedom fighter is Maya Angelou, who gets a banana pudding cupcake because she loved that dessert, Michael said. October is reserved for Harriet Tubman, whose cupcake is mint chocolate chip because her nickname was “Minty.” Nelson Mandela, meanwhile, earns November and a “classic chocolate” cupcake because Michael likes to shape the dark frosting to resemble Mandela’s hair.

MLK is the only person to receive two months: January and February. His cupcake is stuffed with sweet potato pie filling because “that’s a traditional African American pie,” his mother said.

>Michael hopes his cupcakes spread awareness of the past and inspire others to work for social equality.

His interest in food blossomed early. Even as a baby, Michael was happiest when his mother woke him in the morning with “a pancake at his lips,” she said. When he baked for the first time at age 9 — helping his grandmother, Sarah Johnson, prepare an Almond Joy cake for a family dinner — it was love at first whisk.

He has not stopped baking since. Recent accomplishments include his first full-blown wedding cake, chocolate mousse shaped in a rose mold and the cereal milk ice cream popularized by founding chef Christina Tosi’s Milk Bar.

No matter how complicated the bakes become, family remains at the heart of Michael’s craft.

When he’s not filling orders for his company or baking for the homeless, he’s finessing family favorites: vanilla cake with chocolate icing for his mother and older brother, Gabriel; chocolate cake for his father, De’Maryo; lemon meringue pie for his grandmother. Thanksgiving, with its promise of apple pie — which Michael loves to prepare and to eat — is his favorite.

He does all his baking in the kitchen at the front of his family’s three-story home. He shares the kitchen with his mother, who cooks the Platts’ meals there.

Both say the partnership is harmonious: Michael calls his mom his “baking consultant.” Michael’s recipes are entirely his own invention, but Danita Platt provides support and supervision.

Support this kid by following his business on Facebook!