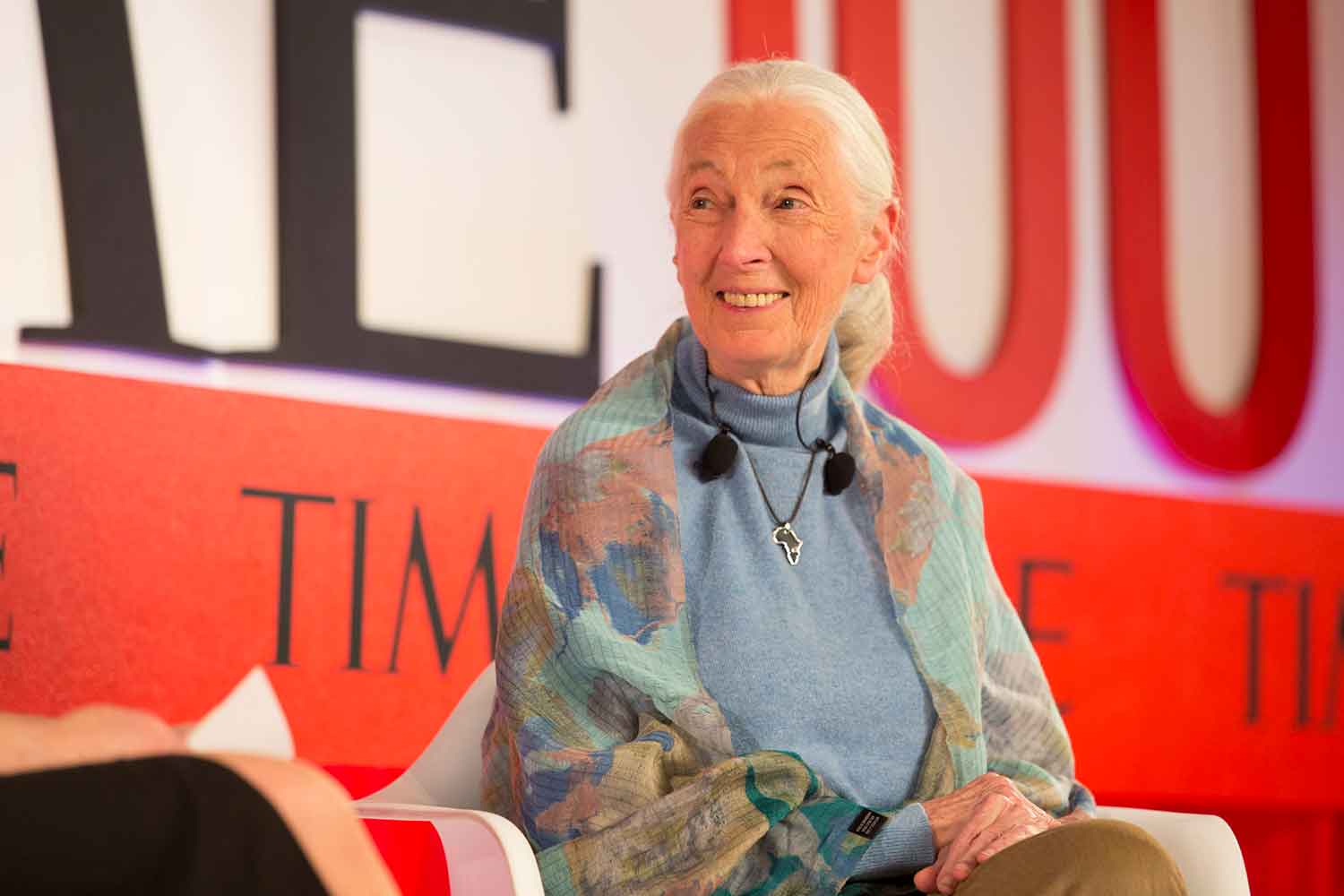 People around the world need to take urgent action right now to protect the planet and all of its living in habitants, famed conservationist Jane Goodall told the TIME100 Summit in New York, on April 23, 2019.

“We have to get together and take action now. We have to understand that each single one of us—though we may feel helpless and hopeless, as one person in a rather dark world—nevertheless, we have to realise that every individual makes a difference, every single day. The choices we make, what we buy. Was it made ethically? Did it harm the environment? Was there cruelty to animals? Was it cheap because of child slave labor? And when hundreds, millions and hopefully billions of us make ethical choices then we start moving towards a better world.”

Goodall, 85, has played a key role on the front lines of the conservation movement for decades, so she is more than qualified to speak out on this matter.

Her research gave the world new insights into primates, including discoveries such as how chimpanzees use tools in their everyday lives. She pioneered new ways of researching animals, including by living with them and using names to identify them.

“The way that I did this study was absolutely contrary to scientific norms at the time,” she said. “We were able to persuade science gradually to come out of this narrow reductionist way of thinking.”

She gained global notoriety for that work in the 1960s following the release of a documentary about her work. Since then has served as ambassador for wildlife and the conservation cause receiving numerous honors and launching multiple initiatives, including the Jane Goodall Institute, a global conservation group.

More recently, she has called for action on climate change and stressed how saving wildlife will also help address global warming. “You can’t save chimpanzees without saving the forest, which means you save all the biodiversity in that forest, which is so important and you save an environment which is so vital to us,” she said.

Goodall also had a message for the forces in society that have stopped the world from addressing global warming. “Deniers of climate change, I want them to go to the Antarctic where the sea ice is melting faster than ever before and dump them in the middle of it,” she said to laughter and applause.

Goodall received a standing ovation at the TIME 100 Summit, just one indicator of the broad generation of environmentalists she has inspired. Actor Leonardo DiCaprio wrote about her for this year’s TIME 100 issue, calling her a friend and inspiration. “Anyone who has heard her speak, or heard her story, has been mesmerized by her life’s work,” he wrote.

The message is clear, evolve or die – this is nothing less than the challenge we face before us.

We can either become depressed about this, sticking in our heads in the sand and pretending that it isn’t our problem, that it will somehow magically go away, or we can rouse ourselves and others to action.

First we must take action in each moment of our lives – this is called ‘being mindful’.  It is the art of discernment.  8 billion people practising mindful actions will lead to a very different world.

If we are mindful of our choices, this will have a bottom-up effect. We cannot wait for governments and corporations to act – and, in fact, the leaders we have to today are not fit for purpose, most of them.

So we must start choosing conscious leaders, new leaders who are awake in terms of their own consciousness and who understand the deep connections that exist between nature and humankind.

Most of you reading this will be around then, so there must be urgency in your voice, in your actions.

Urgency does not mean panic, it means being calm inside, even though deep down we know that we are on the edge.

Neale Donald Walsch began his own “Conversations with God” series in 1993, which he thought was a personal dialogue that would never be shared with the world. Then he realised that the world needed to hear this dialogue!

The first book of the Conversations with God series, Conversations with God, Book 1: An Uncommon Dialogue, was published in 1995 and became a publishing phenomenon, staying on The New York Times Best Sellers List for 137 weeks. The succeeding volumes in the nine book series also appeared prominently on the List.

That bestselling series gave us a roadmap to change how we are BEING, so we can change what we are DOING.

Here are just a few passages for reflection, but I invite you read the trilogy if you haven’t read it already – and to read it again if you have.

“Right now one-fifth of the world’s people are using four-fifths of the world’s resources. And you show no signs of changing that equation. There is enough for everybody if you would stop thoughtlessly squandering all of it on the privileged few. If all people used resources wisely, you would use less than you do with a few people using them unwisely. Use the resources, but don’t abuse the resources. That’s all the ecologists are saying.”

“Is our world really in danger? Is our species flirting with self-destruction – with actual extinction? Yes. And unless you consider the very real possibility of that, you cannot avoid it. For what you resist, persists. Only what you hold can disappear.”

“Human beings have been trying to solve problems at the “doingness” level for a long time, without much success. That’s because true change is always made at the level of “being,” not “doing.” Oh, you’ve made certain discoveries, all right, and you’ve advanced your technologies, and so, in some ways, you’ve made your lives easier—but it’s not clear whether you’ve made them better. And on the larger issues of principle, you have made very slow progress. You are facing many of the same problems of principle that you’ve faced for centuries on your planet. Your idea that Earth exists for the exploitation of the dominant species is a good example. You clearly will not change what you are doing around that until you change how you are being. You have to change your idea about who you are in relationship to your environment and everything in it before you will ever act differently. It is a matter of consciousness. And you have to raise consciousness before you can change consciousness.”

“Much of your race lives in denial. They deny not just the painfully obvious observations of everyone around them, but the observations of their own-eyes. They deny their personal feelings, and, eventually, their own truth. Highly evolved beings—which some of you are becoming—deny nothing. They observe “what’s so.” They see clearly “what works.” Using these simple tools, life becomes simple. “The Process” is honored.”

“If your objective is to live a life of good health and great longevity, consuming dead flesh, smoking known carcinogens, and drinking volumes of nerve-deadening, brain-frying liquids does not work. This has already been demonstrated.

If your objective is to care for Earth, and wisely husband her resources, acting as if those resources are limitless does not work. This has already been demonstrated.

If your objective is to discover and cultivate a relationship with a loving God, so that religion can make a difference in the affairs of humans, then teaching of a god of punishment and terrible retribution does not work. This, too, has already been demonstrated.

Highly Evolved Beings (HEBs) see the circle. Humans do not.

HEBs respond to what is so; humans ignore it.

HEBs tell the truth, always. Humans too often lie, to themselves as well as others.

Deep down you know that something is wrong…

You see the contradictions in your behaviors, and you are truly ready now to abandon them.

You see clearly both what is so, and what works, and you are becoming unwilling any further to support divisions between the two.

Yours is a race awakening. Your time of fulfillment is at hand.

You need not be discouraged by what you have heard here, for the groundwork has been laid for a new experience, a larger reality, and all this was merely preparation for it. You are ready now to step through the door.

This dialogue, in particular, has been intended to throw open that door…”

Watch the video of Jane speaking at the TIME summit.