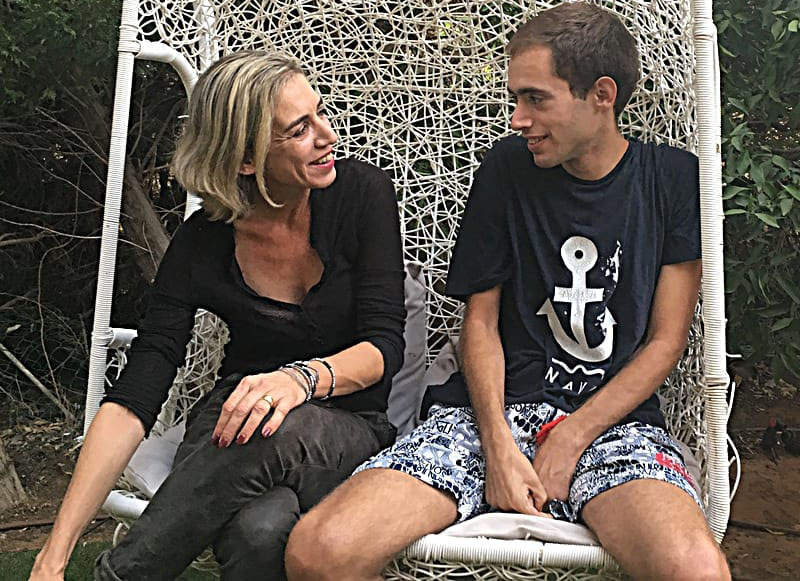 There is nothing that moves mountains more than a parent’s love. Right across the globe, mums and dads have uprooted their families, lobbied politicians, and even gone to jail so that their kids can receive the cannabis based medicines that they believe they need.

Abigail Dar from Israel is one such mother. Her 23-year-old son Yuval is severely autistic, a condition that started when he was just 18 months old. After years of unsuccessful treatment on medication which seemed to make Yuval’s condition worse, Abigail came across anecdotal reports that cannabis could help. So at the age of 22 Yuval started taking medical cannabis and overnight he became a different person.

After campaigning to get autism recognised as a qualifying condition by the Israeli Ministry of Health, Abigail has become directly involved in a clinical trial testing the efficacy of medical cannabis for Autism, and has already launched a crowdfunding campaign to raise funds for the research.

Here is her story.

I have a 23 year old, adorable son who was diagnosed with severe, nonverbal autism. Yuval is a lovely man. You see he is very intelligent through his eyes, but he is very limited in his ability to communicate his needs or wants.

People who don’t live severe autism, can’t really understand what it means. It’s life in the shadow of hell.

Yuval is very restless and has a lot of anxiety. So when he was 12-years-old we started giving him antipsychotic medication on the recommendation of his doctors. But he just became worse and worse. By the age of 17 he got epileptic seizures, so we had to add epileptic drugs. And he also became very self-injurious, biting himself until bleeding and sometimes very aggressive towards his carers or towards me.

Violent outbursts and self harm

If you live like this you can’t really live. I had to always have someone with me to watch my back as I never knew when he was going to have an outburst.

I couldn’t spend anytime just me and Yuval. I couldn’t take him out, I couldn’t drive with him. It was too frightening because it could happen on a main road.

Eventually I think he was 18 and I looked at my husband and I said, “look, giving him drugs that have so many side effects â€“ he can’t tell us what he feels about them and it seems to me we don’t know which medication does what”.

So it took us two months to do an â€˜in-home hospitalization’ â€“ me, my husband and the caregiver, just taking him slowly off all the antipsychotic drugs and he became more restful, even before the cannabis.

Could cannabis be the key?

And then I read that there was research done in Israel about seizures and medical cannabis. And Yuval’s neurologist, Professor Yuri Kramer, who’s one of the leaders in this research, I called him and I said, â€˜I want cannabis for Yuval’. And he said, â€˜No you can’t have it, as he’s doesn’t qualify’.

Abigail convinced the neurologist to refer her to a psychiatrist specialized in treating Post Traumatic Stress Disorder with medical cannabis and despite having very little experience with autism, he agreed to prescribe Yuval cannabis.

It was like magic. My son became a calm person, more concentrated, having a smile on his face. And over a year, he didn’t show any self injurious behaviour or any outbursts which for me and for him is a miracle. It was life changing.

As autism was still not recognised as an official qualifying condition, there was very little information available about what strains to use or a dosing regimen.

I had to go through quite a lot of trial and error and ask a lot of questions until I got to the point where it was really working good for him. So we had our ups and downs with anxiety and hyper [sic], but we never got the self-injurious [sic] or violence, which is a lot.

So we took a high CBD strain for Yuval because he has epilepsy, then we moved to another grower with a different strain, and he became very hyper, not violent, but very restless.

We started with very high CBD â€“ 30% CBD which is the 20:1 CBD:THC. We’ve moved now to 6:1 which is still high CBD. But at night now Yuval gets high THC called â€˜Night oil’ which makes him sleep much better.

Thanks to Abigail’s determination to get medical cannabis treatment for Yuval, she found herself campaigning to get autism recognised as a qualifying condition for medical cannabis. Along the way she met the researcher Adi Aran from Shaare Zedek Medical Center who had already been granted approval for a clinical study into autism and cannabis, and the two began working together.

Abigail had already seen how Yuval responded better to whole plant as opposed to single molecule extracts, and was concerned that the study’s efficacy would be limited by the common pressures associated with funding clinical trials, which tend to favour single cannabinoids. She is therefore campaigning for more whole plant cannabis strains to be included in the study.

It’s going to be the first clinical research about cannabis and autism. And it must work because if they gave clean CBD or isolated cannabinoids, and it didn’t work for autism, it would be devastating. It would be devastating because people wouldn’t bother to read exactly what they gave. They would just read cannabis doesn’t work for autistic people.

We keep talking about CBD/ THC because this is mainly what we know, and these are what most labs are able to check. But we also know the Entourage Effect, that a lot of other cannabinoids and terpenes that work or do something to help our kids.

This belief in the necessity to test the whole plant as well as single cannabinoids, has led Abigail to launch a crowdfunding campaign.

We hope to fundraise at least $30,000 and with any additional amounts we can do more groups and more strains and really check it thoroughly for whole plant and learn what really works better for them.

The crowdfunding is going into a non profit I’m part of called Kvutzat Hashavim. 5% will go to the non-profit as overhead for all our expenses and the rest will go to the research to do good for our kids. Since I’m on the board by Israeli law, I’m not allowed to get paid, so I’m not doing it for any financial reasons.

Abigail is convinced that this parent directed crowdfunding campaign is the best way to ensure that children with autism remain the focus of the study and not financial interests.

Because in this treatment it’s so much about whole plant, and as there’s no money in whole plant, they (researchers) immediately go to pharmaceutical companies, intellectual property and isolated cannabinoids. We shouldn’t let it happen. We should say â€“ let’s first see how to help our kids and then afterwards think how to make money from it.

In the meantime, Abigail continues to see encouraging changes in Yuval, which she believes is due to medical cannabis.

This is the person, this is my son without all the distractions that come along with the autism. He’s even started typing, saying what he wants. He typed today “I’m becoming more independent” â€“ which is â€˜whoah’. We’d done so much work with him, but he’s never been able to communicate his wants and needs before.

If you would like to make a donation, please go to Abigail’s Generosity Crowdfunding page