The Truth About Cancer: What You Need To Know! 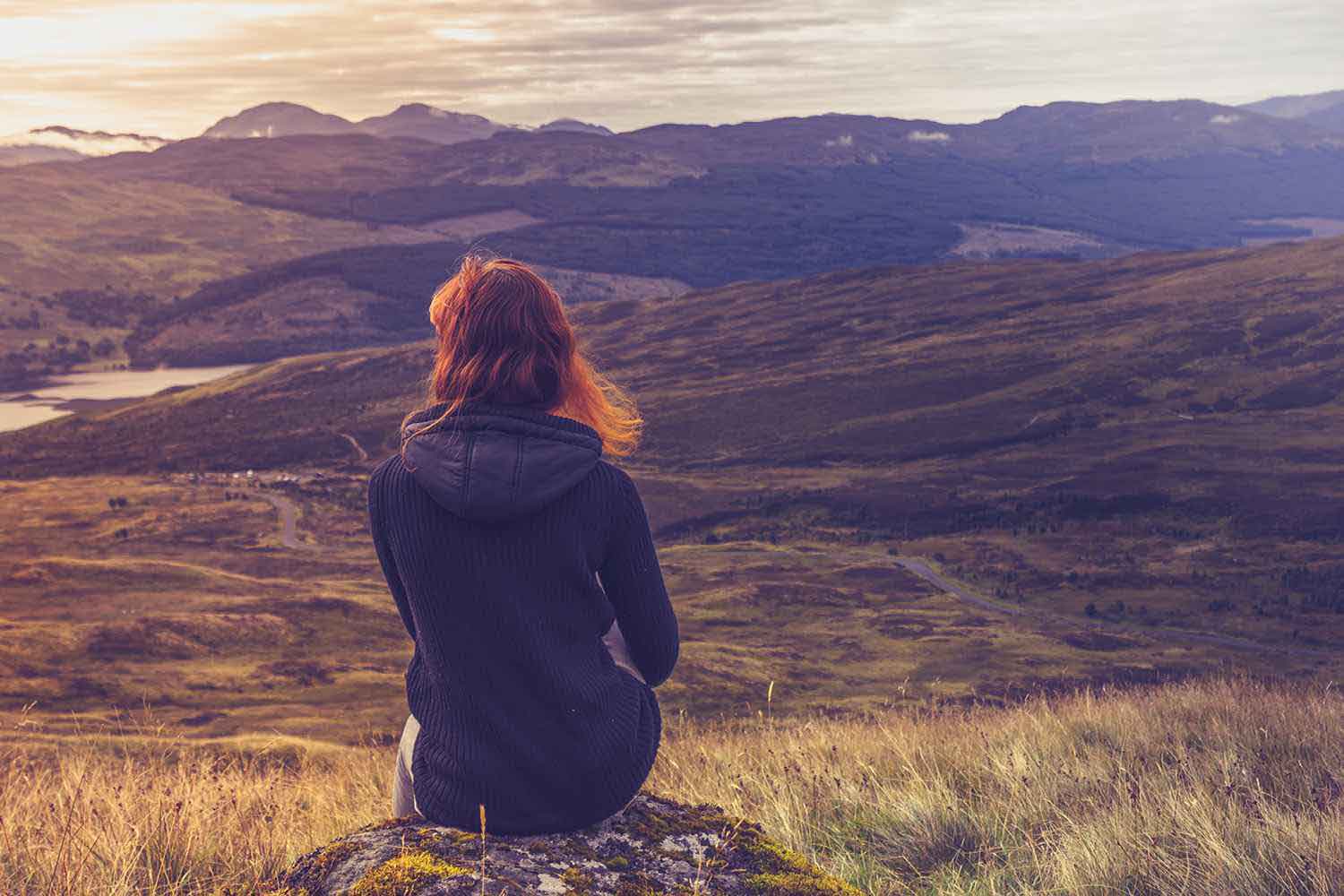 In today’s world of fear-based corporate agendas and outright deception, it takes courage to stand up and speak the truth. Often, it’s a lonely journey to educate others who have simply accepted the ‘way things are’. No where is this fact more prevalent than in the ‘fight against cancer’ and the entrenched interests of the giant pharmaceutical companies.

These companies control government decisions about health at the highest levels, outside of public awareness, and thus continue to make obscene profits by making people sicker, all the while claiming that their breakthroughs are ‘saving lives’!

Truth is self-evident, so the very fact that more people are getting sicker and sicker, many of them dying horrible deaths from toxic effects of current ‘gold standard’ treatments should be setting off alarm bells!

Information is hardly forthcoming even from those who supposedly have our best interests at heart! Cancer charities are good at asking us to donate, all the while ignoring the latest research. It seems their only interest is maintaining the status quo!

Looking at all this with a critical eye, a real cure for cancer would ultimately spell the end of the livelihoods of many of those working in the industry, so most bury their heads in the sand! It sounds terrible — and most people simply cannot believe it – but this is a sad fact in today’s profit-driven medical world!

We have given away our power to a faceless authority which has the arrogance to prescribe a course of treatment that is actually damaging to human health, and even causes death. Accountability checks have been flatly ignored!

The following list of facts tell a very different story to the one regularly painted by mainstream media on a daily basis: 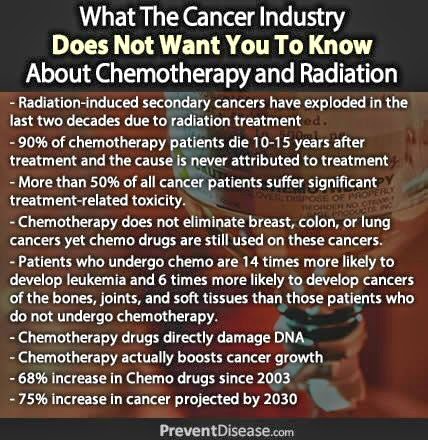 There has been a whopping 68% increase in Chemo drugs since 2003, even though it is killing people more times than it is saving them.

Big Pharma, top physicians, and others involved in the “Cancer Industry” profit heavily each time a cancer patient submits to the conventional Big 3 treatment model:

Most people still think chemotherapy is an effective treatment, despite the clear evidence that it isn’t.

Chemotherapy actually came from the sulfur mustards of World War II – a nerve agent to be used in chemical warfare).

How much money has been spent on brain-washing us to gullibly accept that “napalming” our bodies is necessary in the ‘fight’ against cancer?

Coming from a family of doctors and pharmacists, I initially grew up with a strong medical model of the world but even as a young child I saw that patients on complex medication for chronic conditions got worse over the long-term. Rarely did they improve, if at all. Their baseline for bodily and mental health worsened.

What I’ve seen and realised as an adult, and as a yogi, who peers closely at the world — is that the system actually prevents true healing. In truth, the system is rigged for failure.

It is far more profitable for the ‘powers that be’ to prescribe a drug for the rest of your life, than to give you a drug that heals. It is even more profitable to convince the public to take a drug that destablises the body’s health and rips it apart from the inside out. The more complications, the more profit… it’s not hard to see once you understand what’s really at stake.

How on earth we got to accepting this insane status quo, I really have no idea. Yet, here we are…

The only saving grace for humanity is the freedom to connect and share this type of information freely between us, even though it may be a shock to some who truly believe that their health and well-being is assured when they enter a hospital or clinic for treatment.

Watching The Truth About Cancer (TTAC) docu-series is a must for anyone who wants to wake up from the current paradigm. It is an invitation to see what’s really going on and to help others do the same, so we can be free from an inbuilt, hierarchical tyranny which we have created through our collective ignorance.

Sadly, those brave doctors and scientists going against huge commercial interests for the past 100 years have been vilified and their lives destroyed. It has been all too easy to call anything outside of the ‘gold’ standard ineffective despite the fact that the data shows the exact opposite, and to call anyone who treats patients in a natural, holistic way “a quack”.

This is a trick, a deception, and a common tactic discouraging any serious investigation of holistic, proven methods that save lives – and it’s time for it to stop!

I often hear people blurt out, ‘chemo saved me’ or ‘chemo saved my [brother, sister, mother, father, child].’  I am not adverse to challenging that world-view because it serves no one.

Did chemo heal them or their loved ones?  Or did the body miraculously heal despite the chemo and invasive treatment administered?

Another common tactic to derail any serious inquiry into this subject is calling the information ‘conspiracy theory’ or ‘fear-mongering’. The derogatory label is quickly accepted by a conditioned, hypnotised mind, and thus there is no real need to investigate further… job done!

For those who cannot get past their incredulity that that our current health system is rigged for failure, they must stop insulting those who want to investigate the alternatives, given the breadth and depth of the information shared, including impeccable research from doctors and scientists, and exacting testimony from cancer survivors who have chosen to forego the hypocrisy of a system that damages lives.

Those who want to serve humanity, rather than the greedy shareholders of the giant pharmaceuticals, wish to debunk the ‘junk science’ continually leaked to us on the internet, through our televisions and in our newspapers that continually repeat the lies and hypocrisy.

Here are three key facts you’ll glean from actually watching the TTAC documentary series, which should disturb you:

We should get angry about the blatant lies and prejudices of the current system that treats cancer as a business – and that makes gross amounts of money from making people sicker!

My dad’s best friend died of cancer when he was in his early forties, and I was around nine years old at the time. This impacted me greatly because it was the first time someone I was close to had suddenly ‘vanished’ into thin air.  Later, my cousin also died from cancer treatment leaving behind her five year old son. Chemotherapy did not save them! They just got sicker and sicker, and died painful deaths.

My father, who was a pharmacist all his life, believes that the drug his brother was taking for diabetes actually caused his cancer as a ‘side effect’.

Today, far too may people believe in a broken system that lacks any transparency or integrity, and they pay the price… that price is their health and, ultimately, their life!

Some may strangely prefer to stay in their hypnotic slumber. Yet, the current statistics are grim, with 1 in 2 men, and 1 in 3 women predicted to get cancer in their lifetime. This means we need to be alert to the danger, and take care of ourselves now. Conventional cancer treatment doesn’t work most of the time – the evidence is there for anyone who cares to look!

There is a real opportunity for all of us here to wake up and expose the lies and hypocrisy going on right under our noses. The sheer ignorance and fear-mongering approach of our current ‘healthcare system’ to ram chemo, radiation and surgery down people’s throats depends on humanity’s own ignorance continuing.

2 responses to “The Truth About Cancer: What You Need To Know!”