Why you shouldn’t fear cancer… or any other disease! 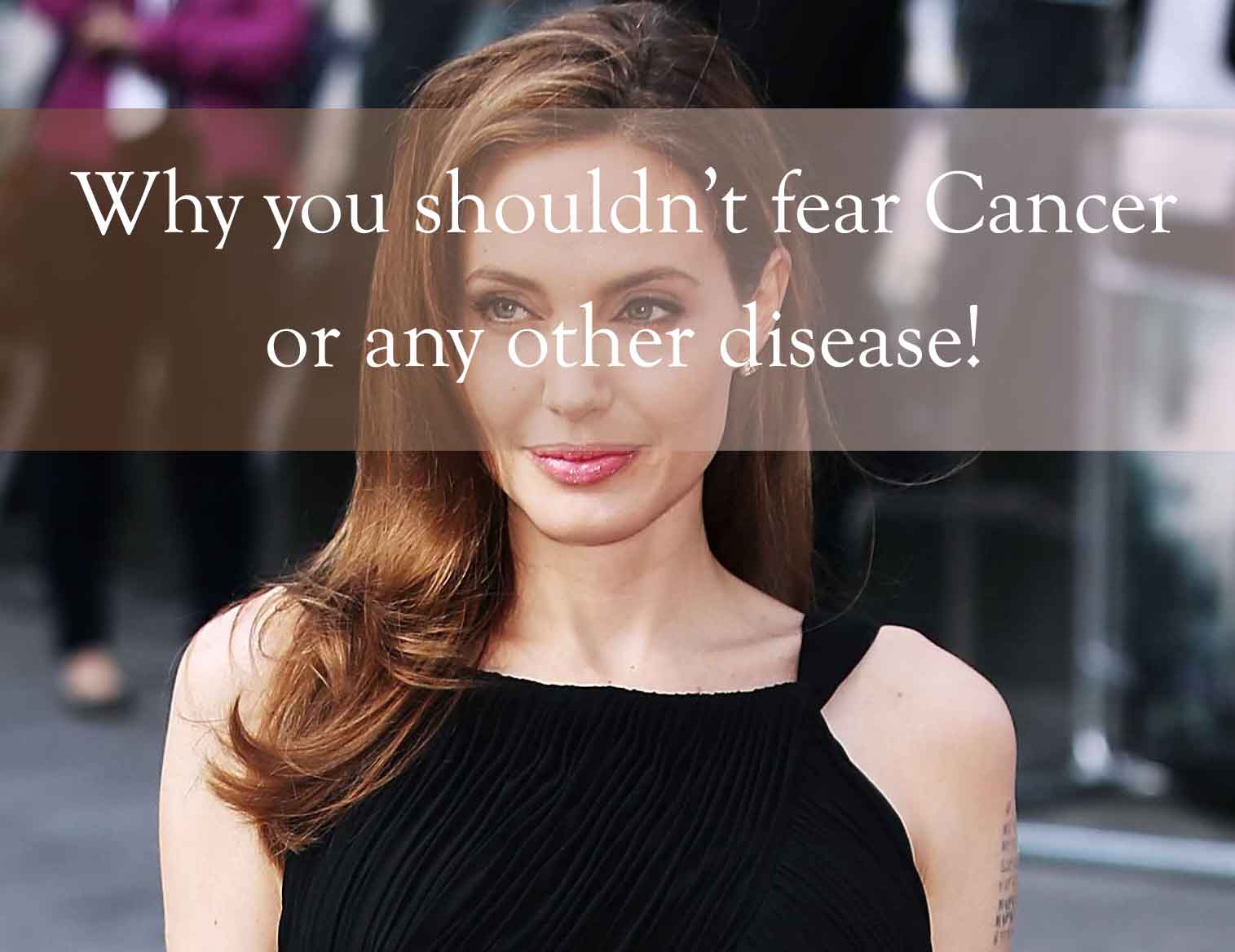 In 2013, Angelina Jolie chose to have a ‘preventative’ double mastectomy to avoid getting cancer and then in April 2015, she had her ovaries and fallopian tubes removed in another ‘preventative’ measure against cancer!

Doctors found a small benign tumour on one ovary but there were no signs of cancer in any of the tissues.

Conventional medical thinking is based on genetic determinism. That we have no control over the genes we were born with, and that we are somehow on a ‘set course’ to illness if we don’t take drastic, evasive action right now! And, there is a whole industry, one with tremendous power, dedicated to maintaining that ingrained belief.

We have allowed ourselves to be dangerously hypnotised: ‘Pop a pill’ or ‘cut it out’ has become the accepted way to solve any health issue, regardless of its severity. Somehow illness has become its own identity, and has nothing to do with the actual person!

Yet whilst the reductionist model of medicine has been useful for addressing infections and acute cases of illness, now we are facing a massive health crisis, the likes of which we have never seen before.

Make no mistake, conventional medicine, outside of the emergency room, is failing us.

The reductionist approach, whilst attempting to prove it has all the answers, in fact disempowers billions of people by putting them into fear since the body is seen as an uncontrollable and unpredictable machine, entirely separate from the person himself/herself. No wonder people feel they don’t have any control over their health any more!

As very young children, most of us were taught to run to the doctor to fix our health issues, so we tend to act on very strong programmed responses when we encounter ill health and disease in our own bodies – and this conditioning can be hard to break. However, we need to step back a little and look at the bigger picture.

As the son of a pharmacist, with many cousins and uncles who are doctors (and who do wonderful work), I do believe there is a need to have access to a medically trained doctor, and to see a doctor at certain times in our lives. Not only can a visit alleviate chronic worry, but it can also be life saving where an accident or illness is severe enough to warrant immediate attention.

When prescriptions are written without really listening to the case history of the person, and the doctor instantly diagnoses what’s wrong with the body, prescribing the latest drug(s) which fail to address the ‘root cause’, this is the slippery path to dependency on meds.

Doctors have been trained in a particular approach to understanding health and disease, and they don’t have the time or the skill set to deal with the body as a whole, nor from the understanding that it is a self-sustaining, self-regulating ‘energy system’.

Integrated medicine is a far more effective approach because it is client-led, and allows the health issue to be tackled from more than one perspective. From an energy standpoint, it works on the disease from many different viewpoints, going far beyond the physical body, where conventional medicine erroneously believes the root of the problem lies/

For some time now, there has been overwhelming evidence that the mind affects the body, and that consciousness is the key player in determining any health outcome. The body is a reflection of our thoughts, emotions and our beliefs, more than anything else. The new biology of the 21st Century (‘epigenetics’) not only contradicts the previous, narrow, reductionist medical model, it blows it right out of the water!

Sadly, despite the mounting evidence that virtually all illness starts with consciousness, the old paradigm of ‘we are helpless bystanders’ continues to assert massive influence on us at a conscious and subconscious level. Apparently, health or illness is something that happens to you – but not because of you! But nothing could be further from the truth!

A British molecular biologist, John Cairns, produced compelling evidence as far back as 1988 that our responses to our environment determine the expression of our genes. Cairns took bacteria whose genes did not allow them to produce lactase, the enzyme needed to digest milk sugar (lactose), and placed them in petri dishes where the only food present was lactose. Much to his astonishment, within a few days, all of the petri dishes had been colonised by the bacteria and they were eating the lactose. The bacterial DNA had changed in response to its environment!

Almost 30 years later, the scientific establishment (rooted in an old consciousness that sees matter as primary and mind-stuff as secondary, or even non-existant!) is still digging its heels in and refusing to budge.

However, the tide is starting to turn, regardless…

So, who to trust?  I invite you to ask the question, ‘which path empowers me’? There, you will surely find the answer. Truth is self-evident, after all!

5 responses to “Why you shouldn’t fear cancer… or any other disease!”