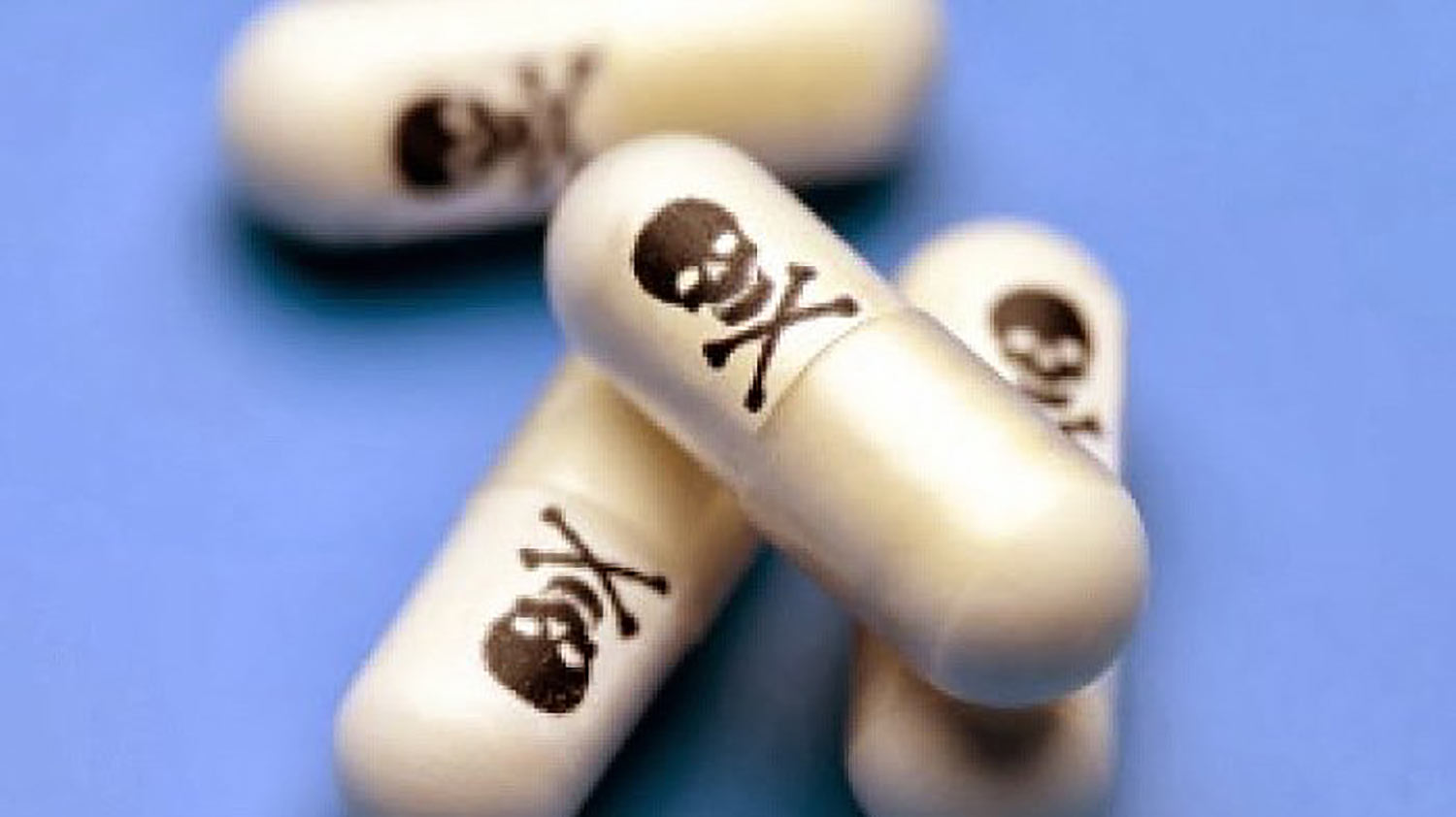 According to medscape.com, the FDA has now approved OxyContin as ‘safe’ to be given to Pediatric Patients between the ages of 11 and 16.

Yet according to RxList, “the tablets must be swallowed whole because broken or chewed tablets release the drug too rapidly and because Oxycontin is rapidly adsorbed, too concentrated levels will be present in the body which can lead to death. Serious adverse reactions which may occur with Oxycontin are similar to those observed with other opioid analgesics; they include respiratory depression, apnea (stopped breathing), respiratory arrest, circulatory depression, hypotension (low blood pressure), shock, and death. This opioid is often the drug of choice for addictive use and can easily lead to dependency. Some patients may develop tolerance for Oxycontin and need to be slowly weaned off the drug. Safety has not been established in children under age 18; caution or avoidance is suggested in pregnant and breastfeeding women as infants can be born with opioid tolerance and depressed respirations. In addition, low concentrations of Oxycontin have been found in breast milk.”

As we all know, but perhaps don’t care to admit, far too much power already resides in the hands of Big Pharmaceuticals to push their drugs to market and to keep widening the scope of drug-taking wherever they see a potential gap, which is then justified as being ‘in the interests of the patient’.

Yet, Pharmaceuticals powerfully influence government at every turn with covert lobbying practices and drug trials are routinely fixed to suit their agenda of greed/profit.

Whilst it may seem altruistic to give OxyContin to those children who are in severe pain, we really need to stop and ask ourselves, are we really thinking of the ‘best interests’ of our children?

Are we going to continually turn a blind eye, saying that ‘they’ know best even when alarm bells are ringing?

Pain is a signal to pay more attention to the body’s needs, not to block it out with licensed narcotics and pretend that everything is OK. In fact, long term dependency on exactly these types of drugs often leads to a life of intolerable suffering, where even more pain is created through unwanted side-effects, which lead to the prescribing of yet more drugs.

Patients are not encouraged to look, or think, outside the conventional box of wisdom, a box which is seeing millions getting sicker and sicker, with no end in sight.

As a technologically progressive society, we have made the mistake of operating from an erroneous assumption – we think that we are continually seeing improvement in the development of new drugs because of our improved technology in practically all other areas of life.

Yet, this is the biggest lie. Drugs, from an ‘energy’ perspective, are a type of ‘low energy medicine’. The widespread overuse of drugs can be likened to taking a sledgehammer to a nail.

The body is a marvellous machine but it is obviously more than simply moving parts. You are much more than just a series of mechanical parts, are you not?  You feel, and know, this at the deepest level of your Being.

The body is an intelligent ‘energy system’, and responds as such. Energy healing and alternative treatments recognise this simple fact, but our current medical approaches are fixated on the now outdated Newtonian model of entropy and decay, and thus keep treating the body as a closed system, rather than an open, dynamic one, which is fully capable of self-repair and self-healing.

Patients certainly don’t have equal access to energy healing and/or alternative treatments that could wean them off long-term dependency on mind-numbing drugs which are damaging to the body’s systems, not to mention potentially life threatening. Nor are patients encouraged to do so, even if they are willing to pay from their own pocket. Rather, these ‘methods’ are ignorantly, and conveniently, pooh poohed.

For example, the article on medscape.com makes the assertion that the opioid oxycontin can be given to pediatric patients aged 11 to 16 years ‘with pain severe enough to require daily, around-the-clock, long-term opioid treatment and for which alternative treatment options are inadequate.’

I set up Energy Therapy over a decade ago because, as the son of a Pharmacist, I saw that medicine wasn’t working – a great deal of the time!

Over the years, energy work and/or alternative treatments provided by myself and my wife have been a wonderful physical and psycho-energetic resource for the vast majority of our clients, with success rates many times higher than a purely drug-based approach.

Of course, we are not the only ones doing such work as we know of many others working effectively to facilitate true healing responses in their clients without the need for an invasive and persistent use of harmful drugs where such use is entirely unnecessary.

Here are just four testimonials out of dozens from many years of service, all of which relate to dealing with chronic conditions and/or pain in the body:

“I originally booked a session to help deal with insomnia and feelings of overwhelment. Two days after the first session I felt much calmer and to my amazement my insomnia had completely disappeared, enabling me to feel more refreshed, energized and able to deal with life. As these issues had been completely transformed with such success I wondered if Jaime could help with my back and neck pain, I had been working with a chiropractor for the last eight years. After the first session the symptoms were 50% better, on the second session they had completely disappeared. I have no hesitation recommending Jaime. He achieves remarkable results!”

“I saw Jaime for chronic double disc prolapse and nerve root damage pain. After one energy clearing/healing session the pain has greatly reduced and movement/flexibility in my body has increased. I have been suffering pain for over 4 years, with traditional methods of injections, medication and such not making much difference. I advocate such a session for anyone seeking relief from such a physical condition.”

“I just wanted to tell that I feel amazing since my SRT treatment with you. All the pain in my back has gone and I feel like a weight has been lifted off my shoulders. I’m much more positive and tackling all the things I need to do. So from now on, instead of going elsewhere, I am going to opt for this treatment instead  as it gives me great results!”

“It’s been 7 days since my energy clearing, and I’m a little bit amazed at how much better I’m feeling. I didn’t doubt that the therapy would help, but I was quite skeptical about the speed at which it’s supposed to start working. Today I’ve woken up -for the first time in weeks- without any despair or anxiety. I’m feeling light and energised, and I actually feel able to tackle big and small chores without feeling overwhelmed. Here’s something interesting also! For the last several months, I have been pretty much living on painkillers, thanks to an old shoulder injury that returned with a vengeance. I’ve been worried about the impact on my liver/kidneys, of so many meds, while I wait for a physiotherapy appointment. I just realised on Sunday that for the first time in about 6 months, I went for a whole 48 hours without any pain meds- and without any pain! I realise this could be yet another effect of the clearing and healing work! It’s quite amazing!”

Interestingly, whilst Big Pharma is desperately hanging onto an outdated scientific worldview — which represents a partial truth but not the whole truth — the new science is based on quantum understandings of the Universe, which means ‘energy’ is primary, and matter is secondary.

The quality of our consciousness and the body’s overall energetic state primarily determines whether or not we manifest dis-ease — and how we heal from any ‘physical’ disease or illness.

To get a deeper understanding of this radical ‘new’ worldview, I recommend reading two best-selling scientific books written for the layperson, ‘The Biology of Belief: Unleashing the Power of Consciousness, Matter and Miracles’ by Bruce Lipton, PhD, and ‘The Field: The Quest for the Secret Force of the Universe’ by Lynne McTaggart.

One thing is abundantly clear: to end the vicious cycle of dependency on drugs, we are going to have to collectively agree to move towards integrative medicine, where alternative ‘energetic’ approaches are used alongside conventional ‘drug-based’ approaches to solving patient’s health challenges.

Orthodox medical approaches may need to be used first, particularly where the presenting conditions are acute, but to say this is the only approach worth considering is nothing short of ridiculous, and amounts to brainwashing.

Frequently, alternative approaches reduce pain and give clients/patients a true foothold over their health again, but because our governments are in bed with the pharmaceuticals, our ‘healthcare’ system only subsidises medical approaches (regardless of efficacy), giving even more power to a trillion dollar greedy industry that, quite frankly, needs to be reduced in size and scope.

Isn’t it time we demanded that our voices our listened to, rather than drowned out by Big Business’ interests? When did profit become more important than people?

We desperately need to become more actively involved in charting the course of our own health, and our own futures… and you can start today!

Firstly, don’t allow a faceless authority to prescribe you or your children toxic drugs without asking for alternatives. By saying ‘no’, you will help reverse an already damaging trend in so-called patient ‘health care’.

Secondly, seek out robust, alternative health practitioners who are doing excellent work and have client testimonials to support their results – it’s as valid as any ‘scientific evidence’ out there! Don’t worry about it being ‘anecdotal evidence’. Much of our Big Pharma’s so-called ‘hard science’ is not even legitimate. The numbers are heavily skewed in drug trials — misleading the public — and many toxic drugs are recklessly pushed to market simply because the pharmaceuticals have the power to do so, not because the drugs are safe and effective.