The Law of Attraction: Learning to move up the Emotional Scale 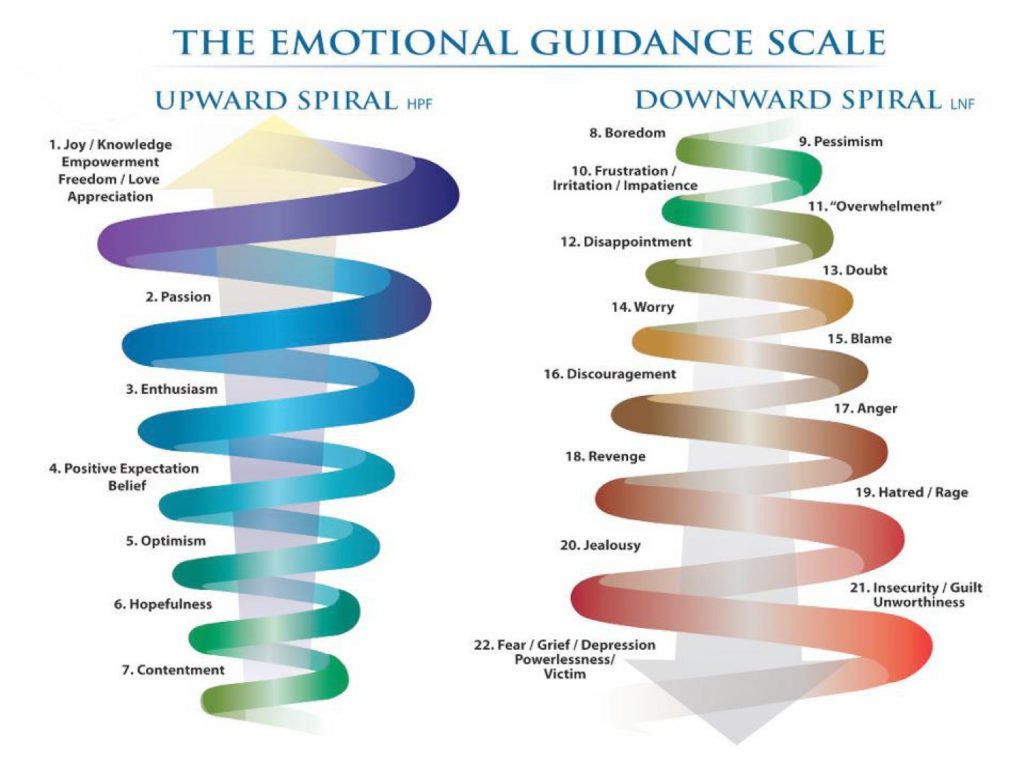 Your emotions give you precise feedback on where you are in relationship to your Inner Being, or Source of Love and Awareness.

Therefore, if you have no awareness of the inner dimensions of your reality, then some or most ports of your life will probably be an uphill struggle because you can’t effectively manage your own vibration.

Any negative emotion (which is a reaction to ‘what is’) feeds your original thought about what you are experiencing, energising it, and then you have another similar thought that adds power to the first thought, and so on.

Firstly, pick a topic that’s triggering you — it could be money, health or personal relationships.

Above you will see the emotional scale split into two parts (really it’s one fluid scale), as first given by Abraham-Hicks, and you will be somewhere on it with regards to your topic. That is to say, the dominant vibration you are offering will be encapsulated by a word, or perhaps several words that are in close proximity to each other.

Frustration and worry often go together. Anger and Joy do not, they are very different in vibration.

The words don’t matter so much as the frequencies behind the words! When you focus on a particular area of your life, you will find your ’emotional set point’ to be somewhere on this scale because of what you have been living/observing.

When working with the Law of Attraction, most people want to be at the top straight away but you can’t usually jump from feeling grumpy, negative feelings to feeling suddenly positive and upbeat. These vibrations are too different in their frequencies. Your practiced, dominant frequency will ultimately prevail each time.

Another vital key is that you must incrementally reach for better feeling thoughts by focusing on wanted aspects of the area you wish to improve.

This is not usually easy for the beginner because they are very practiced in offering an “unwanted” vibration, rather than a “wanted” vibration. As with all skills, it takes time and patience, along with depth of understanding.

After covering the mechanics of moving up the emotional scale, my students were invited to go home and practice on an area that needed cleaning up.  One of them decided to focus on the area of personal relationships, as she was having a lot of difficulties at work with her boss – ultimately, she felt was being spoken to and treated disrespectfully by her boss, whom we will call ‘Ms X’.

She felt that Miss X distrusted her and often spoke to her with animosity, which was clearly an unwanted situation.

Unwanted situations arise for many reasons but their purpose is to lead to clarity about we really want to bring into our lives. If we can learn to focus quickly and consistently on what we do want, then the Law will work for us, rather than against us.

Many people are so accustomed to giving their attention to the unwanted aspects of their vibrational mix that they find it extremely difficult to focus on the wanted aspects. They are trapped in a vicious cycle of ‘observation’ and ‘reaction’.

The good news is that our Inner Being is attuned to what we want, and is always there for us, and holding a signal of joy that we can re-attune ourselves to. It is the signal we want to follow!

When we deviate from that path, we immediately feel ‘off track’ and experience negativity of all kinds.

As my student focused on the unwanted situation, it was very easy to identify the ‘wanted’ solution. She wanted to be spoken to with love, respect and appreciation by her boss, Ms X.  Don’t we all?

Unfortunately, her initial attempt to move up the emotional scale was hampered by trying to ‘jump’ vibrational ranges. She also tended to magnify her negative feelings by refocusing on the unwanted aspects of the relationship that had gone on for some time.

Here you will see her initial attempt to clean up her vibration by incrementally moving up the emotional scale. My comments in italics.

Overall, after the exercise in deliberate creation, my student felt there was some improvement in her vibration but the negative ‘sticky’ or ‘muddy’ energy was still there.

Some of the energy had shifted but not much.

For the beginning student, it is important to keep practicing. Using the power of deliberate thought takes time, patience and practice.

So, during the next class, we refocused on the ‘wanted aspects’ and I guided my student to maintain consistency in moving up the emotional scale.

We started from the beginning again, consciously and deliberately moving up the scale to consciously change her emotional set points around this person/situation.  You can call these set points “emotional triggers”.

So, after her own efforts, and having a second attempt with guidance, my student managed to clean up her vibration around a situation that had been troubling her for many months.

Then, synchronistically, within just a few days of changing the energy around this situation, her boss suddenly and dramatically changed her behaviour towards her.

My student was so excited to share this with the group when she returned to the following week’s class.

This idea of conscious, deliberate focusing underpins the magic of cleaning up one’s energy, and seeing different results in one’s own life.

This is ‘THE SECRET’, demonstrated.

Life is fluid, flexible, and ever changing. We are constantly changing but, if we keep unconsciously choosing the same reactive patterns, then nothing appears to change for us.

Lao Tzu said, ‘If you do not change direction, you will end up where you are heading.’

We can demand that others change – but really, it’s up to us.  When we change, everything else changes!

Even if a particular situation doesn’t change in the way we would hope, then we find we are no longer affected by it. Often, I find, it does change given enough time.

When we fully connect to our Inner Being, or Source of Love and Awareness, often our troublesome situation may change even beyond what was hoped for, and we end up giving thanks for the “contrasting” situations in our life!

“What you think (and how you feel because of your thoughts) and what manifests in your experience always match. You get what you think about, whether it is something wanted or unwanted.” ~ Abraham-Hicks

Want help with really living the Law of Attraction? Book a session today with master coach Jaime Tanna, and change your life!

10 responses to “The Law of Attraction: Learning to move up the Emotional Scale”